COVID-19: China export contraction for the first two months of 2020

The impact on Chinese exports by the trade partner

What has been the impact of COVID-19 on Chinese trade? Having access to IHS Markit Global Trade Atlas we are able by now to look at the data reported by China for the first two months of 2020. It is important to stress that Chinese authorities have provided the data jointly for two months. Thus, we have decided to compare the data in the preceding year (January-February 2019).

It is worth stressing that the export value increased in trade with 56 trade partners with the highest increases in absolute terms for Iran, Turkey, and Cyprus. In total, the trade with the group increased by USD 1,386 million. The total for the remaining countries including the main trade partners was equal to USD - 61,697 million thus clearly outweighed the first one. 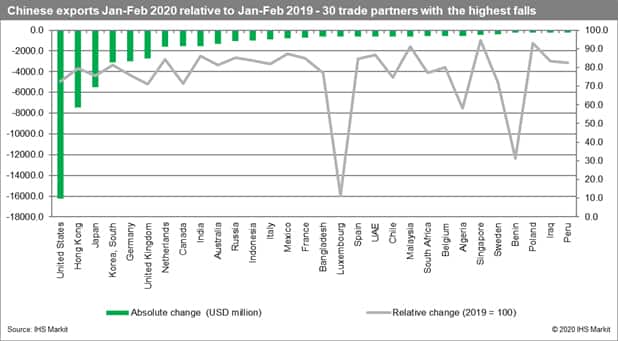 The impact on Chinese exports by commodity group

The impact of COVID-19 on Chinese exports was highly asymmetric across industries and commodity groups. The largest contraction relative to 2019 was observed in electrical machinery and equipment (HS2 85; USD - 15.255 billion), nuclear reactors, boilers, machinery and mechanical appliances (HS2 84; USD - 11.393 billion) as well as furniture and accessories (HS2 94; USD - 4.053 billion). The shock was widespread affecting both traditional as well as high-tech industries and propagated globally due to existing commercial, logistics and production relations affecting the global value chains. The outbreak for the first time showed the exposure of most of the world to the Chinese economy. 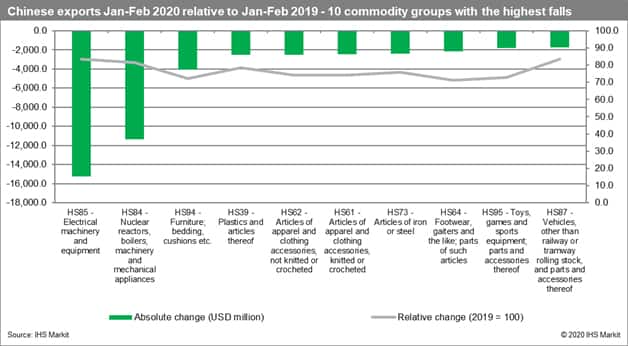 The flattening of the pandemic curve allowed the Chinese authorities to lift some of the sanctions (at least temporarily). The economic activity can gradually accelerate. However, the local epidemic became pandemic affecting by now all countries of the world including China's main trade partners (such as the US, Germany, France, Italy, Spain, the UK) thus weakening their demand for Chinese goods. Thus we should expect rather a gradual recovery over a prolonged period.

It is interesting to note a clear V pattern emerging in the PMI readouts for China in both manufacturing as well as new export orders. Still, in March, the second one remained significantly below the benchmark value of 50.0 still indicating contraction. Thus the incoming data for Chinese exports at least for March should still be below 2019 levels. The situation in Q2 and onwards will depend on the shape of pandemic curves in China and its main trade partners. We cannot expect a major improvement though. 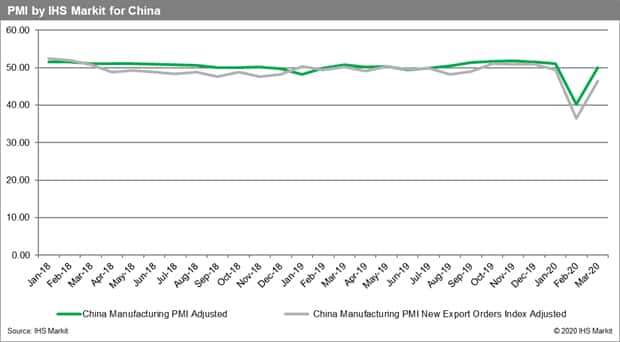 As the official trade data arrives with a delay of approximately two months, it is interesting to look at the data extracted from IHS Markit Commodities at Sea database. The chart below shows the transaction tons for completed international shipments of dry bulk from China weekly in comparison to the average shipments in the three preceding years (2017-2019). The falls are significant (exceeding 30%) and extend beyond January and February 2020 well into March, however, they seem to slowly decrease. It seems to be in line with our prior conclusions and the IHS Markit PMI readouts. 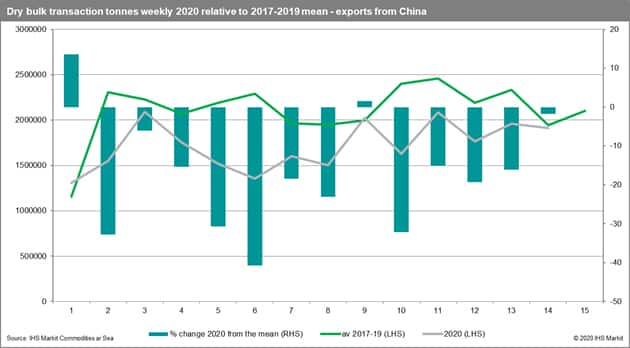 China is the second-largest economy of the world after the US and thus plays a major role in global economic relations being the manufacturing hub and a major exporter. It was hit first and hard by the outbreak of the severe acute respiratory syndrome coronavirus 2 (SARS-CoV2) in December 2019.

On 31 December 2019, the World Health Organization (WHO) China Country Office was informed of cases of pneumonia unknown etiology detected in Wuhan City, Hubei Province of China. The Chinese authorities identified a new type of coronavirus, which was isolated on 7 January 2020. On 30 January 2020, WHO issued a Public Health Emergency of International Concern. Later in March, it declared a global pandemic.

Considering the lessons from SARS, the Chinese government reacted fast and immediately informed the international bodies. The measures introduced by China to contain the outbreak at its source were unprecedented - the quarantine has been levied originally on the city of Wuhan (the source of the outbreak) and later extended to the whole province of Hubei (affecting more than 60 million people). Later social distancing was introduced nationally. Active surveillance and widespread testing followed. Manufacturing production and services were to a large extent frozen which had an obvious impact on economic activity, including exports. Large scale public intervention was introduced to help the enterprises survive. With all these measures China was able to flatten the pandemic curve with 83,597 confirmed cases of COVID-19 and 3,351 reported deaths by April 14, 2020. The epidemic is far from over but the country has started to unfreeze the economy for several weeks now.