Carbon dioxide (CO2) has played a crucial role in managing the COVID-19 pandemic, mitigating the demand impact caused by the drop from industrial applications. As a result, growth in the CO2 market is expected to average 1.6%/year from 2020-2025, with demand from liquid and solid applications growing at a higher rate than the average and gaseous CO2 recovering at a slower rate from the pandemic.

The highest growth rates are forecast for Latin America at 6.5% per year, followed by the Middle East and Africa, which are expected to grow at 4.3% and 3.3% per year through 2025, respectively.

The use of CO2 in the food sector - a major consumer of liquid CO2 - has risen during the pandemic despite a decline in diners at restaurants. The prolonged closures of restaurants, social distancing and various lockdowns have driven increased planning for food inventories and production of frozen food products, which uses CO2. Shipments from large frozen food manufacturers to supermarkets and other retail outlets is expected to continue as off-premise channels like grocery outlets, convenience, and liquor stores stepped up to fill in the gap for consumers to offset the closure of on-premise establishments thus increasing demand for CO2 in the form of dry ice. Dry ice has also been instrumental in enabling major vaccines to be transported and distributed.

The beverage industry has also been making changes to deal with the pandemic. As sporting events, concerts, and conferences were cancelled, almost all marketing changed to online. This is expected to continue until normalcy returns.

Meanwhile, supply of CO2 as a by-product of ethanol fermentation was cut significantly as the COVID-19 pandemic put a halt to travel and dragged down gasoline demand. Most of the corn-based ethanol production plants in the U.S. were either idled or operating under reduced capacity, causing pockets of CO2 supply shortages.

Because of its unique properties, CO2 is a versatile compound with many different applications in gaseous, liquid, and solid states. It is used as a chemical building block (mainly for urea synthesis from ammonia), as an acidifier in beverage and water treatment applications, as a supercritical solvent (e.g., in enhanced oil recovery and caffeine extraction from coffee), as a shielding and inerting gas (e.g., in metalworking or food preservation), and as a chilling and cleaning agent while in a solid state (it sublimates from solid directly to gaseous state).

However, CO2 is regarded as the leading climate killer for its role in accelerating global warming. CO2 is produced by the burning of fossil fuels to generate electricity and heat, or for transportation purposes; via the production of cement; and by various other industries. Attempts are now being made to limit and reduce CO2 emissions while collecting and sequestering carbon dioxide from the atmosphere.

Mainland China is the leading market for overall carbon dioxide demand, followed by North America, and Southwest Asia. North America leads in the consumption of liquid and solid CO2. 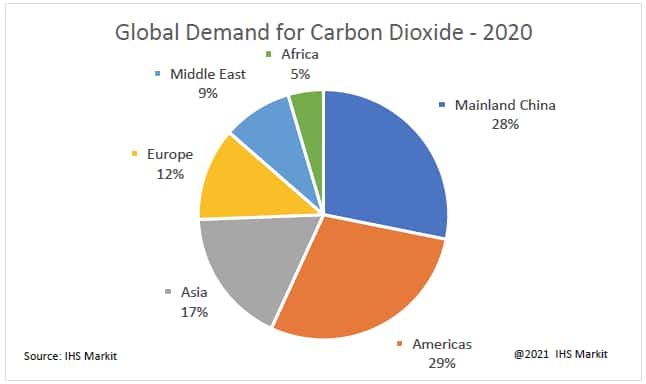 For in-depth look at the CO2 market and developments, please see the 2021 update of the Carbon Dioxide Chemical Economics.

Gain a fundamental understanding of how the energy transition will impact #refining, and the role #petrochemicals.… https://t.co/lBX6aQPbCU

As the #chemical markets evolve, so do we. That’s why IHS Markit Energy & Natural Resources and S&P Global Platts m… https://t.co/WK1XpZYSHq

GPS+PEPP will be returning in-person to Chicago on 20-22 September. Attend this leading industry event to hear from… https://t.co/WFtgRMUEmm