Just as the coronavirus disease 2019 (COVID-19) spreads from China to North America, the disruptive impact of the pandemic will shift from worries about securing goods to intensified volume pressures on the containerized supply chain.

While Chinese manufacturing and trucking capacity is recovering as workers return from quarantine, the surge of containerized exports being produced threaten to overwhelm some North American ports and inland networks. And with trans-Pacific carriers having aggressively slashed capacity, canceling more than 80 vessels to the West Coast from early February to early April, cargo owners could find that freight contracted at rates below the current spot rate pricing is being rolled — i.e., pushed to a later sailing than was booked.

"Volumes are low now for everybody, but come May, it will be just the opposite," Scott Weiss, vice president of business development at Port Logistics Group, told JOC.com. "I'm telling all of our customers, 'Don't be fooled because volumes now are low.'"

Due to that drop-off in import volume, North American exporters have been dealing with scarcity of empty containers for weeks. "Our problem is we can't get enough equipment. It's pretty bad right now. The TP westbound is where the problems really are at the moment," said Trond Prestroenning, CEO for the Americas at forwarder Fr. Meyer's Sohn.

Demand for the paper product exports the forwarder handles for North American producers is strong this March, but a lack of containers, coupled with blanked sailings, means they can't get confirmed outbound bookings until mid-April.

"The blank sailings, while necessary for the ocean carriers to match tonnage with demand, will have a long-lasting supply chain 'bullwhip effect' with bulges of cargo demand not being smoothed out in the network until late second quarter or mid-summer," said Gregory Tuthill, chief commercial officer at SeaCube Containers.

There's hardly a bigger sign of this building pressure than the arrival of the largest mega-ships to ever call the US West Coast. Beginning in late March, the 2M Alliance of Maersk Line and Mediterranean Shipping Co. will deploy mega-ships to the ports of Los Angeles and Long Beach. The 2M carriers are temporarily upsizing vessels in their TP6 and TP2 services from an average of 14,000 TEU to between 19,000 and 23,000 TEU in capacity because they anticipate a rebound in containerized imports from China beginning in April.

Maersk and MSC are also responding to calls from the two ports and their 12 terminal operators to focus on returning empty containers to Asia that have been accumulating in the region since the Lunar New Year holiday in Asia was extended by several weeks due to coronavirus safety precautions.

"The pendulum is going to swing back," said Gene Seroka, executive director at the Port of Los Angeles. Through a supply chain optimization group, both Southern California ports are working with carriers, terminal operators, beneficial cargo owners (BCOs), labor, truckers, and railroads to move the empties back to Asia now while import volumes are still low.

The extended closings of Chinese factories beyond the two-week shuttering tied to New Year festivities has been devastating to trans-Pacific volumes. On a year-over-year basis, US imports from China in February crashed to a near four-year low, and total Asia imports fell to an almost three-year low, according to data from PIERS, a sister product of JOC.com within IHS Markit. US containerized imports from China plunged 22 percent year over year for the month, while total imports from Asia sank 10.1 percent compared with February 2019. 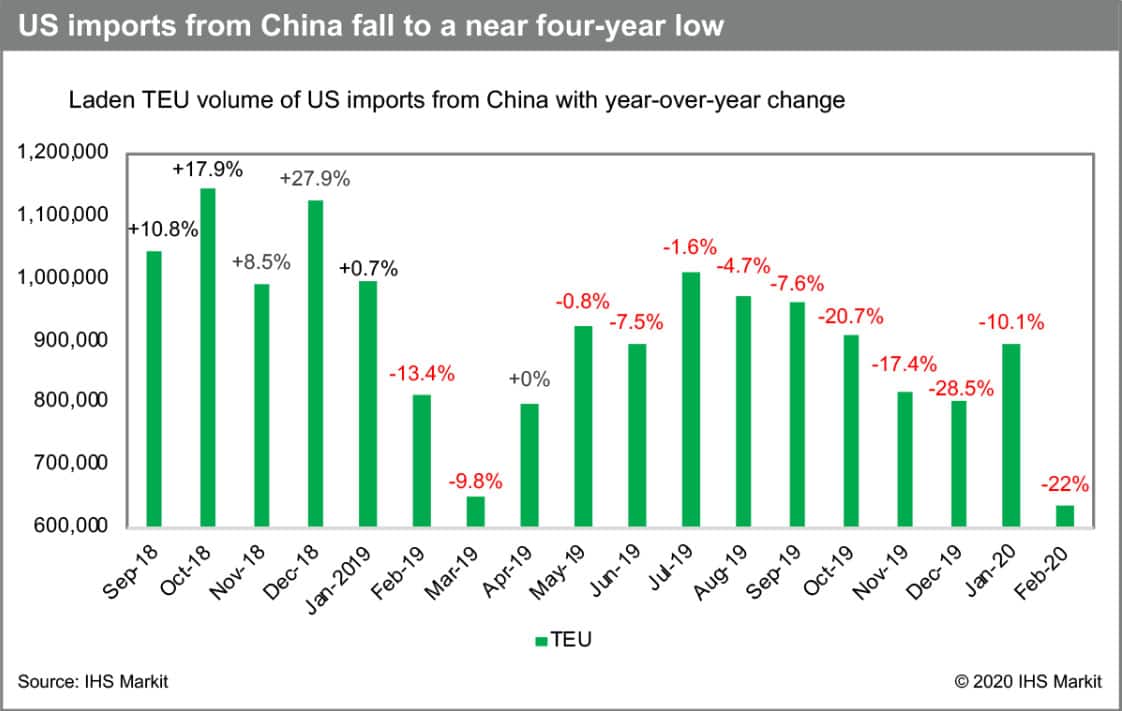 But US containerized imports will rebound, according to analysts. The real question is when and how quickly. The latest Global Port Tracker report, published monthly by the National Retail Federation and Hackett Associates, projects year-over-year monthly import declines through April, after which the tide should turn, with increases in imports of 9.3 percent and 9.6 percent predicted for May and June, respectively.

How fast North American imports from Asia bounce back will determine whether some cargo owners find themselves in a situation similar to late 2018, when they were forced to pay hundreds of dollars in additional surcharges to just get their cargo onto ships. The jump in eastbound ocean spot rates in mid-March — routings to the US West Coast were up 18 percent year over year and rates to the East Coast up 9 percent — gave cargo owners a taste of the tighter slot capacity they'll see in the coming weeks.

According to Sea-Intelligence Maritime Consulting, blanked sailings to the East Coast peaked during Week 7, ended Feb. 15, and Week 8, ended Feb. 22, for the West Coast.

"Weeks 9 and 10 have seen a clear tapering off in terms of new blank sailings," said Alan Murphy, CEO of Sea-Intelligence. From this week (10) through Week 15 beginning April 5, carriers have announced 15 blank sailings to the West Coast and four to the East Coast.

Murphy said the number of canceled sailings going forward will be about the same as during the corresponding period last year, which is a "strong indication" that carriers see a pickup in cargo on the horizon.

In fact, there still may be some hope for the beginning of the rebound to occur in April. Manufacturers of parts and components in Asia are starting to ship some of these cargoes by more expensive air freight as factories in China ramp up production. "This is not your usual air freight cargo. It's large and heavy," said Christian Sur, executive vice president of sales and marketing at Unique Logistics International.

If finished products begin rolling off the assembly lines later this month and sufficient truck capacity develops to move the merchandise to ports in China, West Coast ports next month could begin to see greater volumes given the shorter transit times from Asia, he said.

"We may definitely see some volume pickup in April," Sur said. The real surge will occur in May and June, however, as retailers and direct importers replenish their inventories and move into the back-to-school imports that normally occur in late spring and early summer, he said.

Back-to-school merchandise is the second-largest cargo category in the eastbound trans-Pacific after holiday season goods, so BCOs better have their logistics plans solidified soon, Weiss said.

Beyond the West Coast

The impact of the coronavirus on the Los Angeles-Long Beach port complex has received the most attention, from reports of port job losses to TV media pans of quiet marine terminals. But the blank sailings are spelling reduced imports up the coast to Canada and down to Mexico, and major East Coast ports warn of deeper volume drops in March.

One terminal operator at a Mexican Pacific Coast port, who asked not to be identified, said ocean carriers have confirmed 20 blank sailings from Asia before April, all of them on the West Coast. He expects Mexico to see a year-over-year cargo volume loss of about 120,000 containers in the first quarter of 2020. Based on the 2019 first quarter volume of 507,275 TEU on the Pacific Coast, as reported by the Secretariat of Communications and Transportation, that would translate to a decline of about 24 percent.

The Port of New York and New Jersey is planning for volumes on a year-over-year basis that will be down 30 percent in March. But the volumes will return, and if the scheduled vessels can't handle the container glut, empties will start piling up and could exceed storage capacity at the terminals and container yards. That can mean added expenses for the shipper or trucker in the form of a chassis on which to store it, and rented yard space, said Tom Adamski, agent for First Coast Logistics. 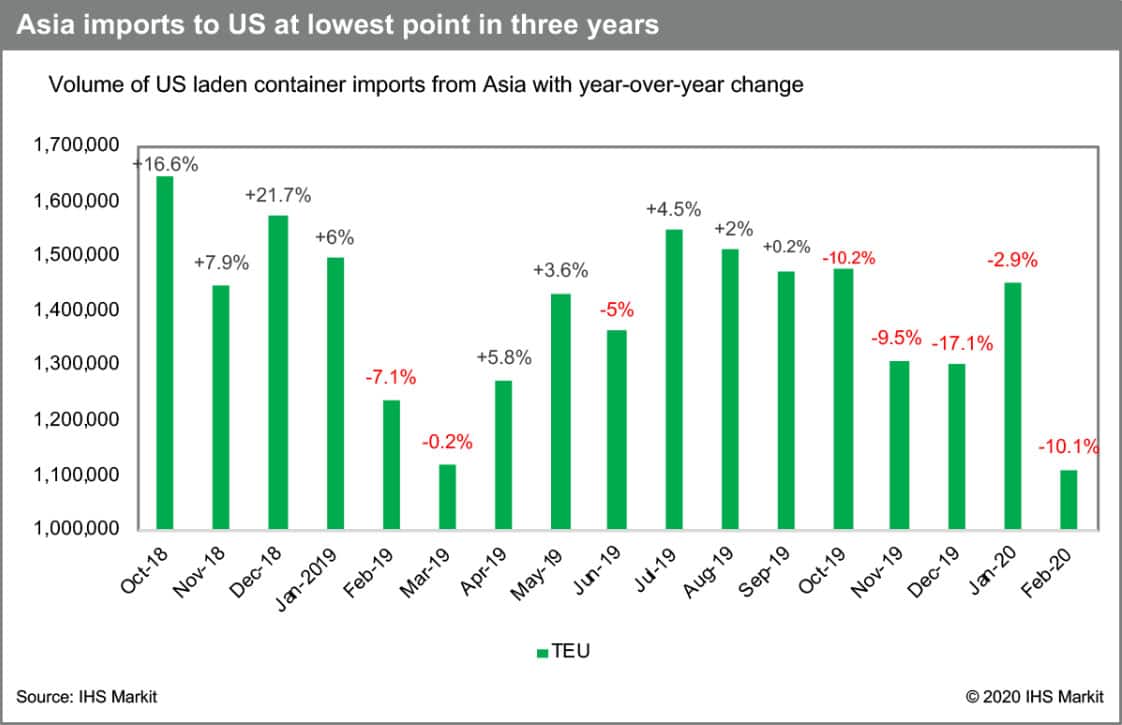 The Port of Savannah, the second-busiest container gateway on the East Coast, anticipates it will end March down 18 percent from the same month last year due to blank sailings linked to COVID-19. There is "plenty of space" to handle all the empty returns, according to Griff Lynch, executive director of the Georgia Ports Authority, despite blank sailings meaning fewer vessels bringing boxes back to China.

With restaurants and large retailers such as Apple, Nike, and Abercrombie and Fitch closing for a few weeks, Lynch said he doesn't anticipate a need for extra-loader vessels or pent up demand for imports once all the factories come back to full capacity in China.

"We are a consumer nation, so if no one's going to sporting events, shopping, or other activities, how does that impact the buying and import patterns? It can be slight, but there is going to be another blip," he told JOC.com. "So what I envision is we're in the first blip and there's another blip that will happen in a few months [when imports slow again]."

Produced by Journal of Commerce (JOC) and PIERS