Our country risk team regularly reviews the drivers of significant risk score changes over the last quarter (in this case: 1 April 2020 to 30 June 2020, inclusive) to provide insights on the current risk environment and the impact these changes have on our country risk premiums.

Spotlight on the countries/territories with significant change over the last quarter.

The Fidesz-led government has resorted to sectoral tax hikes to mitigate the economic effect of the COVID-19-virus pandemic. In May, it temporarily doubled the banking levy and stated that the original tax is now unlikely to be abolished within the next five years. The government has also reintroduced a temporary tax on retail companies, mostly affecting large foreign-owned chains. The reintroduction was likely to have been motivated by the European Court of Justice deciding in March that a similar version of that tax in 2010-12 did not breach EU norms. The government is very likely to use ad-hoc sectoral taxes as an instrument of market policy, mainly at the expense of large, foreign-owned entities in the finance, retail, energy, and telecommunication sectors. The tax changes mirror the Fidesz-led government's response to the 2008-09 global financial crisis, when Fidesz resorted to similar sectoral tax hikes.

IHS Markit expects South Africa's real GDP to contract by 8% in 2020 because of the economic impact of COVID-19-virus-related restrictions on movement and businesses. President Cyril Ramaphosa's relatively weak position in the ruling African National Congress (ANC) party is likely to result in him conceding to some policy demands from a radical faction in the party to unite it ahead of important municipal elections in 2021. Key demands are for greater government control over monetary policy and a reduction in the government's wage bill, indicating the increased risk of a shift in the government's policy framework that is onerous to private enterprise. Public wage cuts are, however, unlikely, indicating that new tax-raising measures will be necessary to finance South Africa's large public debt burden, expected by IHS Markit to reach 81% of GDP in 2020, up from 58% in 2019.

Major events: Notes on the response of our country risk scores to major events over the last quarter.

Relaxing restrictions. Most European countries passed the peak of COVID-19-virus transmission in May to June, allowing their respective governments to begin easing restrictions on movement and business, facilitating the reopening of non-essential services (like hospitality and retail), as well as permitting social gatherings and international travel. As a result, the direct costs of conducting normal operations rose substantially for private enterprises, as reflected in IHS Markit's regulatory burden score peaking to 2.2 on average across Europe in early April, reflecting an average 0.4 increase overall after COVID-19-virus-related restrictions were implemented. Despite phased relaxation plans being under way, our regulatory burden scores have not fully recovered to the levels prior to the onset of the pandemic, remaining at 2.0 on average across Europe by the end of June compared with 1.8 in December 2019. The United Kingdom and Italy are the only European countries to still register within the 'High' risk band, and Spain recorded the largest score reduction (of 0.3) since its government ended the legal state of alarm on 21 June. 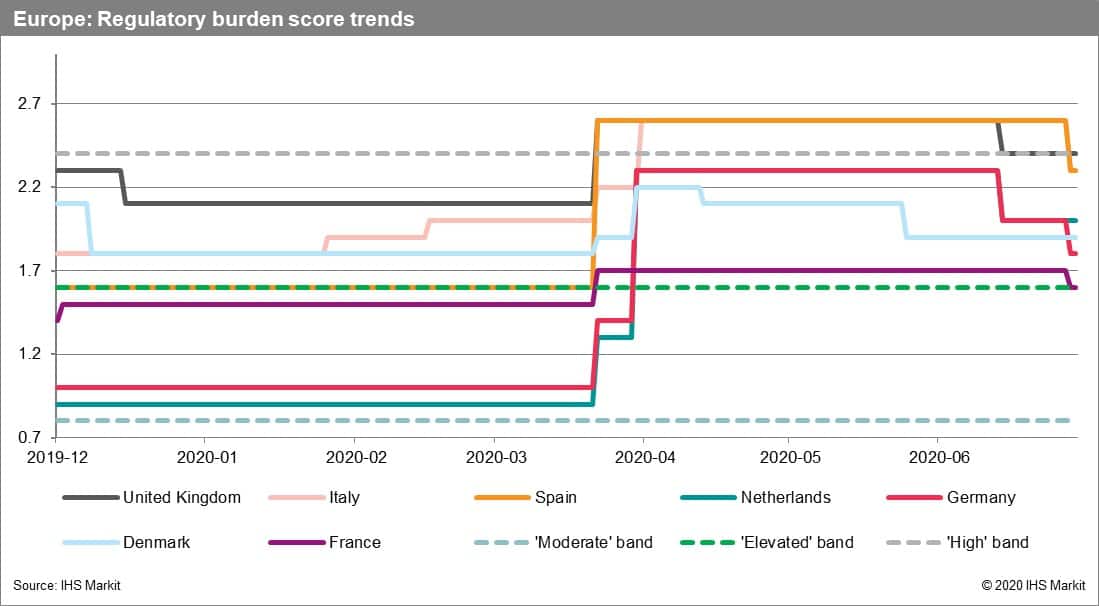 The UK continues to register the highest regulatory burden score within Europe, given that its government was the last to implement restrictions and remains the slowest to ease them, with pubs, restaurants, and salons reopening on 4 July, but with social-distancing measures remaining in place. The UK also started from a comparatively higher baseline in April (2.6, within the 'High' risk score band) given that its largely service-sector-based economy faced higher costs from the introduction of social-distancing measures, with limited capacity to recover output by pushing back production schedules, unlike in those economies with more developed manufacturing sectors such as Germany. A notable differentiator for the UK remaining within the 'High' score band is ongoing uncertainty over its opposition to extending the Brexit transition period with the European Union, involving potential increased costs stemming from changes to the country's regulatory framework in key areas like supply chains and trade.

By contrast, Denmark, France, Germany, and the Netherlands remain within the lower 'Elevated' score band. Notably, Germany recorded the largest score reduction within this score band (of 0.3 over the quarter), with the authorities allowing most businesses to reopen in early May, subject to timing agreed by the 16 federal states, and entailing the continuation of social-distancing requirements similar to European counterparts. Denmark on 27 June eased travel restrictions to and from the EU, the Schengen Area, and the UK. France opted to ease travel restrictions from 1 July, with Italy and Spain remaining subject to restrictions. 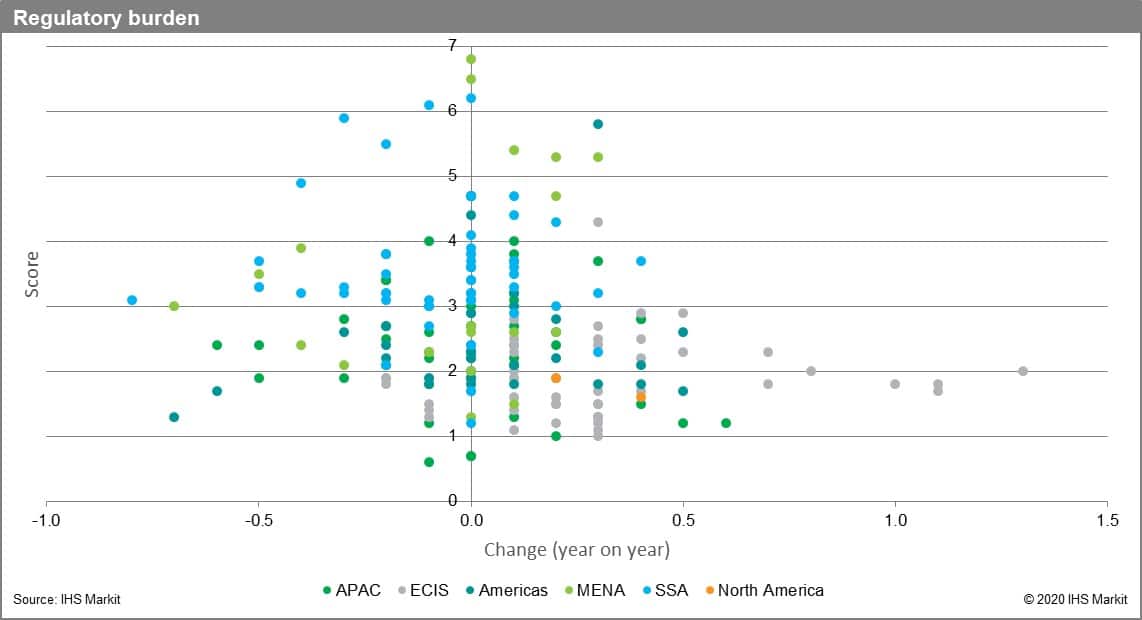 Our team maintains 21 forward-looking risk scores for 211 countries/territories. For an overview of our scoring methodology and the criteria used to set scores, please contact us to learn more or request the full report.