The Q2 2021 update of the Country Risk Investment Model (CRIM) Q2 2021 showed a decline in the potential costs over a project's lifecycle (development, production, and incomes phases) that are associated with the risks of infrastructure disruption and contract enforcement: costs reduced on average across all countries and sectors by USD1.32 million, USD0.31 million, and USD0.23 million, respectively. Still, state contract alteration risks deteriorated globally, increasing potential losses by USD0.63 million on average. The largest reductions in our overall Country Risk Premiums (CRPs) - the additional rate of return require to adjust for country risk - were concentrated in the Middle East and North Africa, and North America. Conversely, CRPs in the Asia-Pacific region worsened considerably, with risk-adjusted premiums increasing by just under 16 percentage points on average, primarily driven by an increase in strike and protest risks. 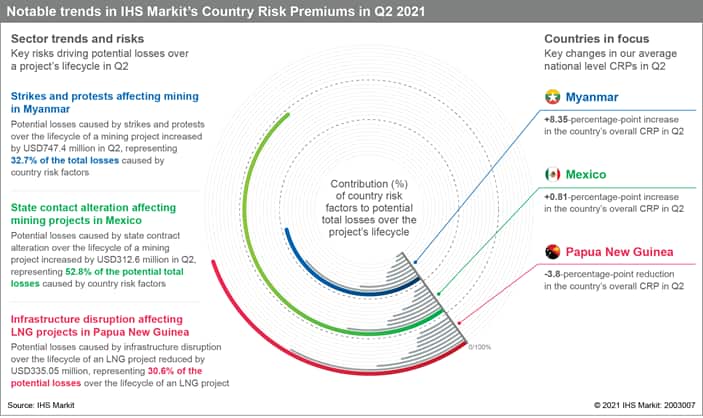 The development of Papua New Guinea's Liquefied Natural Gas (LNG) sector is at risk of disruption being caused by community unrest, blockades at project sites, and opposition from landowners. Armed landowner groups are willing to use violence, but the government is highly committed to developing the LNG sector and would provide for the regular deployment of security forces, with private operators also employing onsite security. Landowner groups are also disorganized and poorly trained, mitigating the risk of a major attack. According to the CRIM, the potential cash flow losses attributable to infrastructure disruption over the lifecycle of an LNG project in Papua New Guinea have declined USD335.05 million compared with the previous quarter.

The Mexican government deems that mining operations are 'non-essential', causing many miners to suspend their operations. Given the resulting increase in the risk of state contract alteration, the CRIM estimates that the potential losses to NPV caused by this risk over the lifecycle of a mining project in Mexico increased by USD312.6 million compared with the previous quarter, representing 52.8% of the potential total losses caused by all country risk factors. The government refuses to grant fiscal relief to businesses and any change of policy direction in this regard is unlikely to include mining. 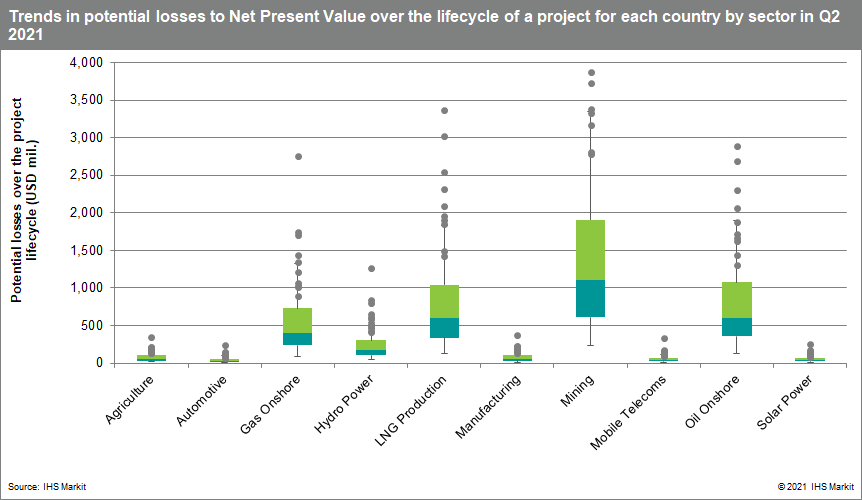 Download the full report and our country risk premiums