The additional rate of return needed to adjust for country risk over the full lifecycle of a project, as reflected in our Country Risk Premiums (CRPs), increased most notably on average in two sectors for this first-quarter update: onshore gas and onshore oil. The increases since the fourth-quarter update were driven by costs associated with capital transfer and expropriation risks over the full lifecycle of a project, particularly those located in Ethiopia, Mozambique, and Turkey.

Notably, the continued vulnerability of the Turkish lira to sharp losses raises the risk that restrictions are placed on capital outflows and/or currency convertibility, which would affect projects across several sectors including automotive. Separately, a significant deterioration in Afghanistan's risk environment resulted in the average CRP for all geographies and sectors across the Asia Pacific region recording the largest average increase in the fourth-quarter update.

The average CRP for projects located in Latin America and the Caribbean improved marginally, although this was primarily because of a reduction in projected costs associated with contract alteration risks in a few countries, most notably those within the extractives sectors in Cuba, Guatemala, Peru, and Venezuela. However, other major Latin American countries have or are expected to shift politically to the left, indicating rising legal risks. For instance, the inauguration of Honduras's new president in January has increased potential losses to the net present value (NPV) of projects in the country's mining sector. 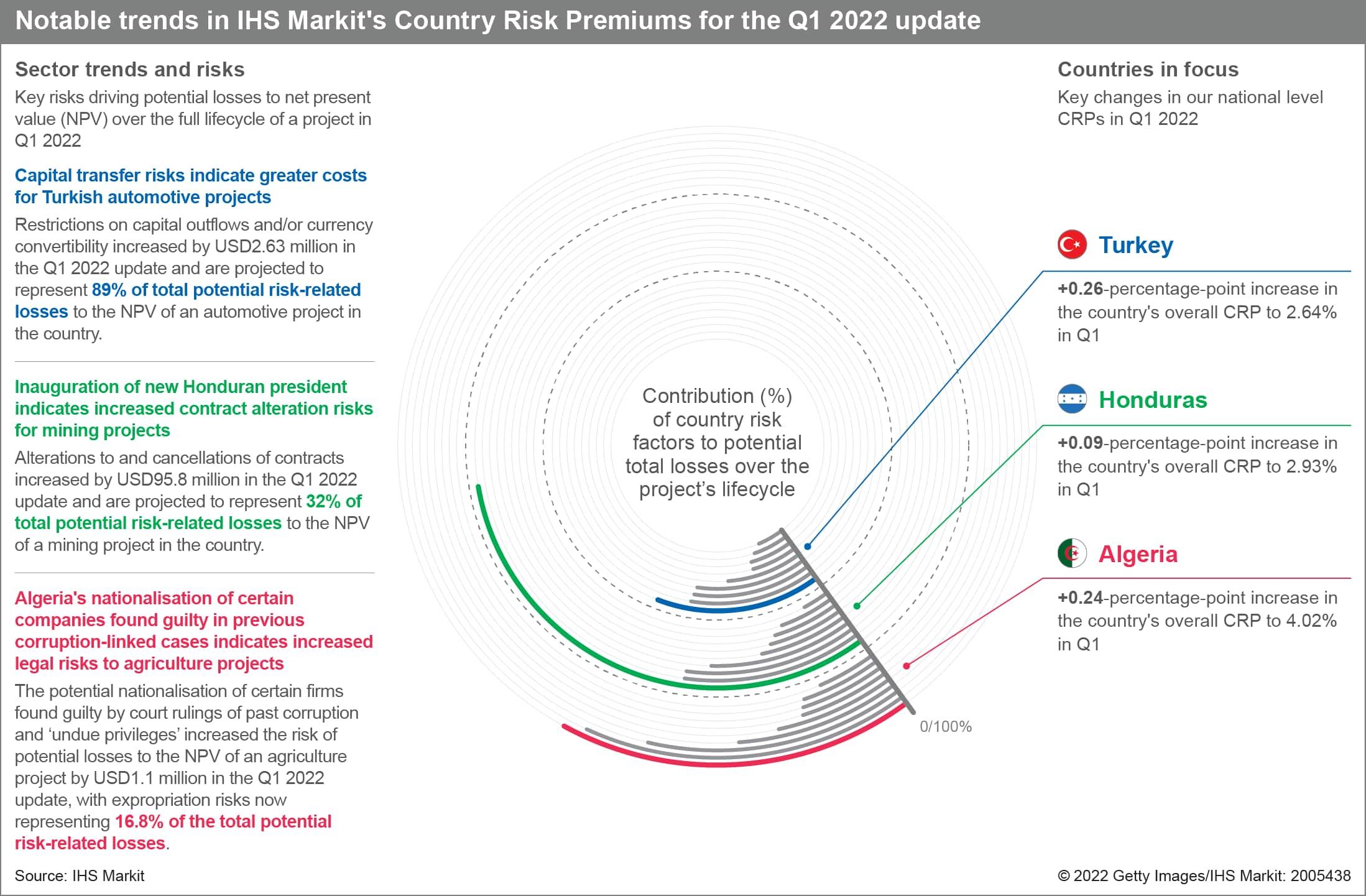 Turkey's local currency the lira fell by almost 50% in 2021, was supported by the Turkish central bank (TCMB) pausing its rate-cutting cycle in January and February, as well as a series of TCMB interventions and a currency swap since mid-December which have stemmed the currency's collapse since easing started in September. IHS Markit expects this rate-cutting cycle to be paused for a few more months, however, the lira remains vulnerable to sharp losses, raising the risk that restrictions are placed on capital outflows and/or currency convertibility. Given an increase in our capital transfer risk score, the CRP for an automotive project in Turkey increased by 0.34 percentage point to 3.25% since the fourth-quarter 2021 update - the second-highest CRP after mining.

Following her inauguration as president on 27 January 2022, Xiomara Castro of the left-wing Liberty and Refoundation Party (Libertad y Refundación: LIBRE) pledged not to grant new mining licenses. This pledge indicates that the risks of cancellation are likely to increase in cases where there is strong community opposition, as Castro has promised to use referenda to decide controversial issues. The CRIM estimates that the CRP for a project in Honduras's mining sector increased by 0.36 percentage point to 5.38% since the fourth-quarter update, with losses to NPV caused by the risk of contract revocation now amounting to USD454.8 million over the full lifecycle of a mining project.