Against the backdrop of the International Monetary Fund's (IMF) and the World Bank's annual meetings on 12-18 October, finance ministers from the Group of Twenty (G20) leading economies will meet on 14 October. The delegation will decide whether to extend the Debt Service Suspension Initiative (DSSI) for International Development Association-eligible borrowing countries and Angola into 2021. According to the Paris Club of official creditors, 39 of 73 eligible countries have applied, with 31 finalising debt suspensions - mostly in sub-Saharan Africa. The extension is supported by the US Treasury, and World Bank President David Malpass stated on 19 August that he also supports an "agreement to actually do haircuts and write-downs". However, private creditor uptake remains negligible: there are no proposals to introduce a non-voluntary commitment or provide an effective framework to co-ordinate the diverse range of market participants who, in any case, have strong fiduciary obligations to their clients. The G20 likely will also decide on increasing the IMF's Special Drawing Right (SDR) quotas for the lowest-income countries, which would facilitate the expansion of coronavirus disease 2019 (COVID-19)-related emergency financing packages. 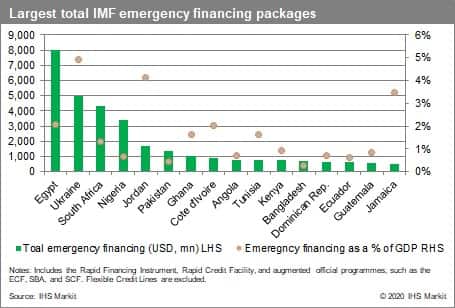 Bolivia holds presidential and legislative elections on 18 October that were postponed due to the COVID-19 virus pandemic, with a potential second round being held in November. The previous October 2019 election result was annulled due to alleged electoral fraud. The resulting resignation of former president Evo Morales caused a political vacuum and social unrest in November 2019. Continued political polarisation suggests that the election result will be contested again. Bolivia's next president faces several economic challenges: IHS Markit is projecting the economy to contract by 7.7% of GDP in 2020, with low commodity prices pushing down natural gas revenues (which account for 20% of total government revenues), and rising unemployment. Furthermore, the lack of exploration for new gas and mining reserves under the previous administration has limited growth prospects. Leading candidates Luis Arce and Carlos Mesa are proposing greater industrialisation of natural resources to reduce export dependence. However, this process will take several years and will not address fiscal revenue losses and greater social spending outlays associated with COVID-19. Consequently, IHS Markit expects the fiscal deficit to exceed 10% of GDP in 2020, with any new president requiring additional multilateral financial support in 2021. 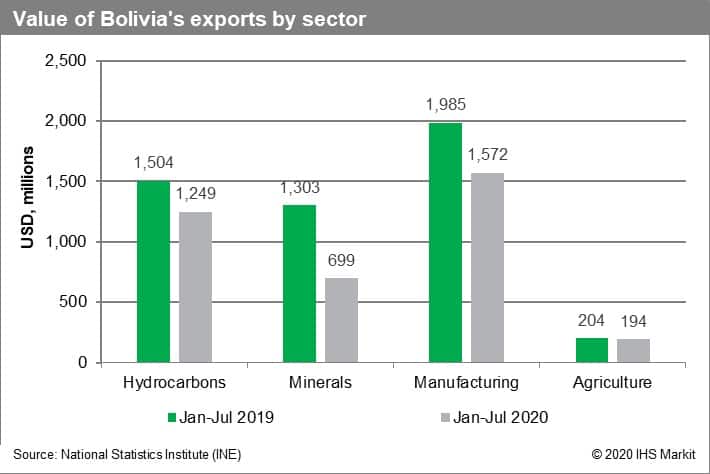 Other events to watch in October