Prime Minister Scott Morrison's Liberal Party reached an agreement ahead of the 2021 United Nations' Climate Change Conference of the Parties (COP26) with its junior coalition partner, the National Party, on committing to net-zero carbon emissions target by 2050. The emissions target for 2050 will not be formalized by legislation, and there were no changes to Australia's 2030 target. COP26 is to be held in Glasgow between 31 October and 12 November. Morrison appears keen to demonstrate more decisive action on climate change ahead of the federal elections due on or before 21 May 2022, since voters are showing growing support for more ambitious climate change policies. The Nationals have traditionally been opposed to decarbonization measures. Their acceptance of the new target is based on seeking state concessions to support regional industries, such as the provision of government funding packages to assist regional businesses transition to lower carbon activities and legislative changes protecting the agricultural and mining industries. Legislative actions to support Australia's new climate goal are yet to be announced, but we expect that they will be closely tied to the federal government's existing low-emissions technology investment drive and the current gas- and hydrogen-led direction for energy policy. Increased energy costs or higher taxes on carbon-heavy industries such as agriculture and mining remain very unlikely.

A total of 23 governors, 335 mayors and 2,724 local council members will be elected in regional elections scheduled for 21 November. The elections involve opposition parties, which are participating for the first time since starting an electoral boycott in 2018, but against a background of deepening divisions. Opposition parties now argue that participation is necessary to regain political influence and regional and local governmental control lost because of past boycotts. The elections, however, will take place without the active endorsement of Juan Guaidó, who is still recognized by the United States as Venezuela's interim president, and who claims conditions for free and fair elections remain absent. The results will be crucial for the future of Venezuela's political opposition. A government landslide victory accompanied by electoral irregularities highlighted by the EU observers' mission would benefit Guaidó, increasing the likelihood of opposition calls for new US sanctions and his reappointment as interim president in January 2022. If the government allows opposition victories in key governorships, in a process validated by EU observers, Guaidó would struggle to maintain his position as the opposition's leader, even if symbolically reappointed, as most opposition parties would lean towards co-existence with President Nicolas Maduro's administration rather than Guaidó's goal of immediate government change.

Kyrgyzstan's capital Bishkek will host the first EU-Central Asia Economic Forum on 5 November, having been where the EU unveiled a strategic focus on the region in 2019. Given the Taliban's takeover of power in Afghanistan in August, it is almost certain that regional efforts to mitigate major humanitarian risks in that country will dominate the agenda. The five Central Asian states will expect the forum to raise the EU's regional visibility and counterbalance China's expanding economic influence. A key indicator will be whether the forum advances the EU's Global Gateway initiative, which was unveiled in September to counterbalance China's Belt and Road Initiative. Central Asian states will seek more practical measures by the EU to accelerate the implementation of their respective partnership and cooperation agreements. The forum also provides an opportunity for the EU to promote green transition projects, including those eligible for EU financial support. Kazakhstan will be most affected by the outcome as the EU is its biggest trade partner, accounting for 30% of its foreign trade in 2020. For the EU, the share of its foreign trade with Central Asian region remained a negligible 0.6% of the total in 2020. 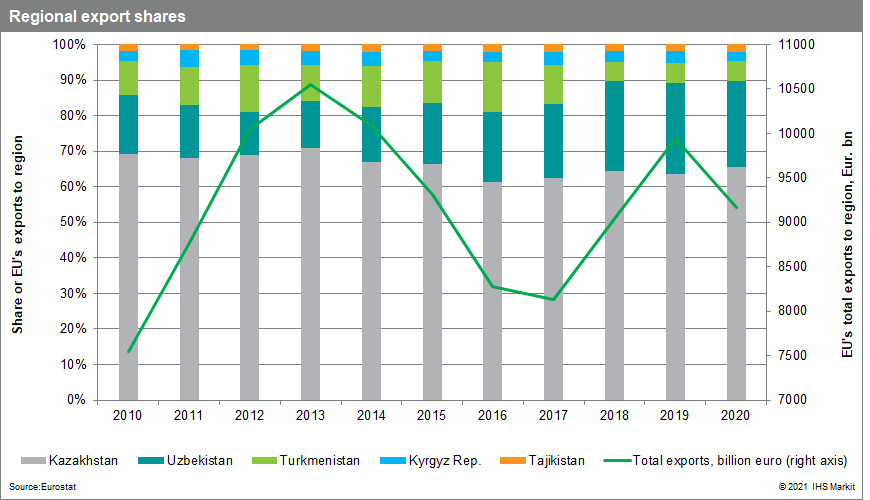 Nicaragua will hold general elections for the presidency, Congress, and municipal positions on 7 November. The elections will take place against the background of the detention of seven opposition presidential candidates and the arrest of 32 opposition leaders to date, including the detention of the country's main business leader on 21 October on political charges including treason. All detainees deny the charges against them. President Daniel Ortega of the ruling Sandinista Front for National Liberation (Frente Sandinista de Liberación Nacional: FSLN) party will compete against five presidential candidates, but despite Ortega's loss of popular approval, these are unlikely to present any real obstacle to his re-election. The European Union and the Organization of American States (OAS) will not act as international observers after May 2021 electoral law changes, and it is thus highly unlikely that the US, Canada, or most EU and Latin American countries would recognize Ortega's (very probable) re-election. The flawed electoral process increases the probability that more international sanctions would be imposed after the election by the US, EU, and Canada and that the OAS will invoke the Democratic Charter, suspending Nicaragua's membership.

In August, Prime Minister Naftali Bennett's cabinet approved a Budget and an accompanying Economic Arrangements Bill to cover the remainder of FY 2021 and 2022 - the first government budget approved since March 2018. On 2 September, the budget passed by 59-54 in its first reading in Parliament, clearing the first major stability hurdle for Israel's 61-member coalition, which holds a narrow majority. The final reading is scheduled for the first half of November. Despite its criticism, the opposition, led by Binyamin Netanyahu, has little prospect of blocking its passage. That challenge potentially comes, instead, from within the ruling coalition. The government encompasses eight parties from across the political spectrum, including - unprecedentedly - an Islamist Arab party, and has survived by focusing on non-controversial issues. However, coalition members have occasionally threatened to vote against the budget over unmet demands, including Ra'am's insistence on the legalization of several Bedouin townships in the Negev, and its demands for government development funds for Arab communities. Conversely, the police have begun a sustained campaign to combat violent crime and illegal firearms possession within Arab communities, another key Arab demand.