The 47th 'Group of Seven (G7)' summit is expected to be held on 11-13 June in Cornwall, United Kingdom. In addition to the seven-member countries, Australia, Brunei, India, South Korea, and South Africa, countries that the UK is seeking trade agreements with, were also invited to attend as guests. The summit is expected to address global issues including recovery from the coronavirus disease 2019 (COVID-19) pandemic, climate change, technology, and the digital economy. On 5 May, following a foreign and development ministers meeting, G7 members released a joint statement on foreign and security challenges. The statement included targeted language against mainland China and Russia. Regarding mainland China, G7 members raised concerns over territorial disputes in the East and South China Seas, human rights issues, and alterations to the governance system of Hong Kong SAR, in addition to voicing support for Taiwan's participation in the World Health Organization and the World Health Assembly. Similar rhetoric was directed against Russia, with G7 members adopting the position that Russia has continued with its "irresponsible and destabilising" behaviour, referring to recent military build-up near border areas with Ukraine, in addition to allegations of Russia undermining democratic systems, adopting malign cyber activity, and spreading disinformation. Immediately following the G7 summit, US President Joe Biden is expected to meet with Russian President Vladimir Putin in Geneva, Switzerland. US Secretary of State Antony Blinken, in a 4 May interview, emphasised a "democratic recession around the world", highlighting the US's foreign policy orientation towards the Indo-Pacific region and willingness to engage with "like-minded" allies to address perceived threats to the current international system. 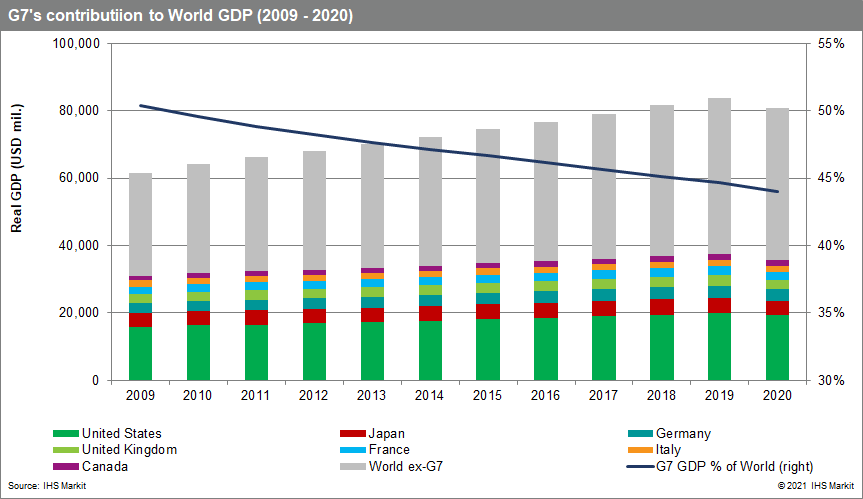 Starting on 1 June, the governments of several Indian states are to review or begin reviewing their COVID-19 lockdown policies. Although the caseload and death toll during the current wave of the virus outbreak is more severe than during the first wave in March-June 2020, the impact of the current lockdown on the economy is likely to be more muted. IHS Markit downgraded India's fiscal year 2021/22 GDP growth forecast in early May to 7.7% from 9.6% while accounting for the second wave, with early economic indicators suggesting better adaptation to restrictions by businesses.

Long-term recovery from the COVID-19 pandemic in India, however, is likely to be slow. The extent of the second wave, impacting acutely on a high number of families in urban and rural areas, will discourage people from spending, while accounting for expenses already incurred and for future contingencies. The humanitarian fallout has increased public criticism of Prime Minister Narendra Modi to the highest levels since he first came to power in 2014. However, his government is unlikely to see cabinet or administrative-level resignations, with much of the domestic media narrative shifting to both post-wave recovery and stimulus measures for welfare schemes within the one- to two-month outlook. At the time of writing, only about 15% of India's population had received their first vaccine dose; expediting the vaccine rollout, although unlikely given sustained supply shortages, would be key to government stability and to avoid a potential third wave.

Ethiopia was due to hold its general elections on 5 June 2021, but the National Electoral Board of Ethiopia announced the postponement of the polls to 21 June, due to logistical challenges. The postponement from 2020 has contributed to violent anti-government protests and initiated a chain of events leading to the federal government's military intervention in the Tigray region, as well as a decline in the government's popularity, particularly in the Oromia region. As several of the country's main opposition parties, most prominently the Oromo Federalist Congress (OFC) and the Oromo Liberation Front (OLF), are boycotting the elections and the Tigray People's Liberation Front (TPLF) is prohibited from participating, the government will be in a very advantageous position going into the elections to secure a parliamentary majority. If re-elected, the government is likely to progress its privatisation of the telecommunications, aviation, power, and logistical sectors. The government awarded one telecom licence to a consortium on 22 May and is likely to proceed with the partial privatisation of state-owned Ethio Telecom by 2022. Expropriation and licence cancellation of the newly auctioned assets are very unlikely as the government seeks to set a positive precedent for the privatisation of other state-owned assets.

Armenia is scheduled to hold early parliamentary elections on 20 June, in accordance with an agreement reached between the opposition and the government in March. That agreement sought to resolve the political impasse that followed Acting Prime Minister Nikol Pashinyan's signing of the Russian-brokered ceasefire that ended 44 days of hostilities with Azerbaijan over the breakaway region of Nagorno-Karabakh in November 2020. Since the ceasefire, Armenia has been gripped by anti-government protests, with the opposition demanding Pashinyan's resignation for what it sees as concessions contrary to the national interest granted in the terms of the ceasefire. An ongoing border dispute with Azerbaijan, which has involved some Azeri troops entering Armenia's Syunik and Gegharkunik provinces, has exacerbated the domestic political dispute. The pending formation of an Armenia-Azerbaijan state commission on border delimitation, with Russian participation in a consultative capacity, is aggravating further political polarisation in Armenia. In addition, the opposition accuses Pashinyan of conspiring to make territorial concessions to Azerbaijan. Against this backdrop, Pashinyan's My Step alliance continues to garner the most electoral support, as reflected in a public opinion survey conducted by Gallup International in April, according to which 27.2% of respondents would have voted for his party if elections had been held at the time. The closest rival is Armenia's ex-president Robert Kocharyan and his Armenia bloc, which elicited 14.3% support in the survey.

On 18 June, the Islamic Republic is scheduled to hold its 13th presidential election. In his second term, President Hassan Rouhani is barred from seeking re-election. The former Trump administration's withdrawal of the US from the Joint Comprehensive Plan of Action (the Iranian nuclear deal), as well as the Biden administration's relative slowness in lifting sanctions reimposed as a result of the US withdrawal from the deal, is providing electoral momentum for Iran's hardliners. This, combined with the ultraconservative Guardian Council's disqualification of candidates, makes a hardliner the probable next president. The likelihood of a hardline Iranian administration places pressure on the P5+1 countries conducting negotiations in Vienna to reach an agreement to bring both the US and Iran back into compliance with the nuclear deal. However, Iran is likely to resist nuclear-related extensions and reject attempts to address its ballistic missile programme and regional policy. A deal sealed before the new Iranian president assumes office at the start of August and lifting of sanctions on key sectors such as oil and banking would improve Iran's economic recovery and trade significantly. If negotiations extended beyond August, Rouhani's successor would likely demand further politically difficult concessions from the US, such as non-reversal of Iran's nuclear advances (especially advanced centrifuges) and recognition of its legitimate security interests, albeit while maintaining diplomatic channel

Peru's second-round presidential election is to be held on 6 June. Pedro Castillo of the far-left Free Peru (Perú Libre: PL) party is running against Keiko Fujimori of the conservative Popular Force (Fuerza Popular: FP) party. Ahead of the final weeks of the campaign, opinion polls showed Castillo leading, although Fujimori has closed the gap significantly in recent weeks. Fujimori has increased her support in metropolitan Lima and in the north, while Castillo remains ahead in rural areas in the south and centre of Peru. Castillo's initial programme proposed the nationalisation of natural gas, oil, and the main mining sites. This policy agenda appeared designed to attract left-wing voters, proving successful in that Castillo's first-round vote was the highest in rural districts and areas with prior mining-related conflict. Castillo has since moderated his tone and is less likely to pursue mining nationalisations, instead seeking to revise the 1993 constitution, increase corporate taxes, and renegotiate extractive-sector contracts. If elected, Castillo is likely to be constrained by the lack of a parliamentary majority or a party apparatus. Most of the centre and centre-right parties represented in the next Congress will be broadly sympathetic to continuation of the current business-friendly approach, likely opposing policies that radically alter conditions affecting investors. Fujimori will continue to seek to capitalise on concerns about Castillo's far-left agenda, appealing to undecided voters by emphasising her support of foreign investment in key sectors, including extractives, to reduce her high rejection rate from 65% (now standing at around 46%). 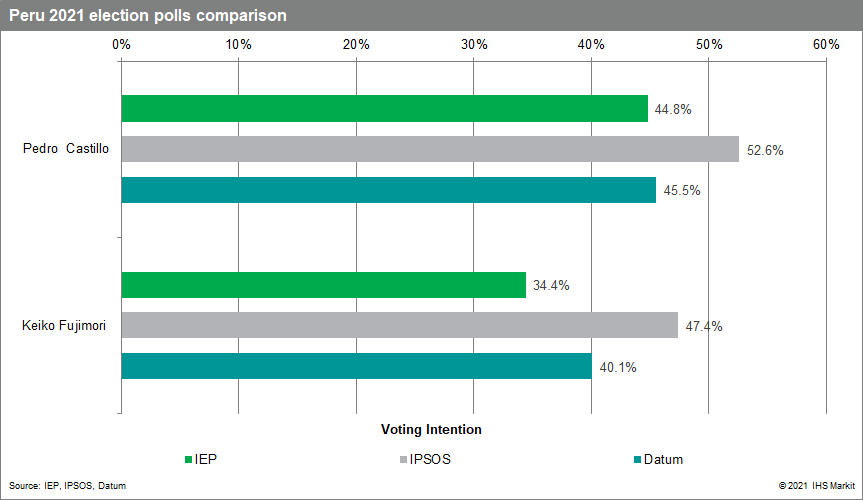