The Saudi government will limit attendance of the Hajj pilgrimage, due to start on 17 July, to 60,000 citizens or residents of the country. Pilgrims will have to show proof of vaccination or immunity to coronavirus disease 2019 (COVID-19). Approximately 2.5 million people performed the Hajj in 2019, including international pilgrims, and a limited number in 2021 will significantly reduce the annual revenue intake expected from both the Hajj and year-long umrah pilgrimages - equivalent to approximately USD12 billion. The loss of revenue this year is likely to delay or downgrade existing projects for the development of the Saudi tourism sector and Hajj expansion, making it unlikely that a Vision 2030 target for annual tourism revenue equivalent to approximately USD100 billion will be achieved in that timeframe.

Somalia is due to hold legislative and presidential elections before 26 July 2021. Although all major stakeholders have agreed upon most of the election protocols, negotiations are still underway and it is likely that the 26 July deadline will be missed. The election has already been delayed because of disputes between the federal government, opposition candidates, and regional governments over key issues such as appointments to regional electoral commissions and security for electoral caucuses where electors nominated by the commissions select MPs. Responding to the delay that exceeded parliamentary and presidential term limits, incumbent President Mohamed Abdullahi Mohamed and MPs on 13 April extended their term limits for two years without the Senate's approval. In response, opposition-aligned militias held military positions in the capital Mogadishu for around one week and fought with the national army. An estimated 250,000 people were displaced because of this violence. President Mohamed reneged on his term extension on 1 May and placed Prime Minister Roble in charge of organising the election later that month. Compared with President Mohamed, Roble has achieved greater consensus among all major political stakeholders on key issues like security responsibilities and the composition of electoral commissions, reducing the likelihood of renewed militia violence in Mogadishu. However, militant group Al-Shabaab are likely to continue targeting election activities and associated personnel with mortar attacks, vehicle-borne improvised explosive devices, and small arms.

Bulgaria will hold an early parliamentary election on 11 July 2021. Coalition talks after the regular election on 4 April 2021 failed to produce a ruling majority, with six parties having entered the 240- seated parliament. The centre-right Citizens for European Development of Bulgaria (GERB) of former Prime Minister Boyko Borissov came first in the April election, winning 75 parliamentary seats, while the recently constituted anti-establishment and ideologically undefined There Is Such A People came second with 51 seats. An interim government is in power until the constitution of a new parliament. The 11 July election is very likely to generate similarly inconclusive results to the 4 April election, requiring a broad coalition of more than two parties or a government of the minority. Programmes aimed at disbursing EU funds to digital and green projects are likely to be delayed to 2022, with Bulgaria missing the April indicative deadline for submitting its national recovery plan to the European Commission required for disbursements from the EU's Recovery and Resilience Facility. Reviews and audits of public sector bodies and companies are likely with government changes, including when interim governments are in power. Tenders being cancelled in the building construction, defence, transport, and energy sectors continues to be likely, while uncertainty to concession contracts will remain high. 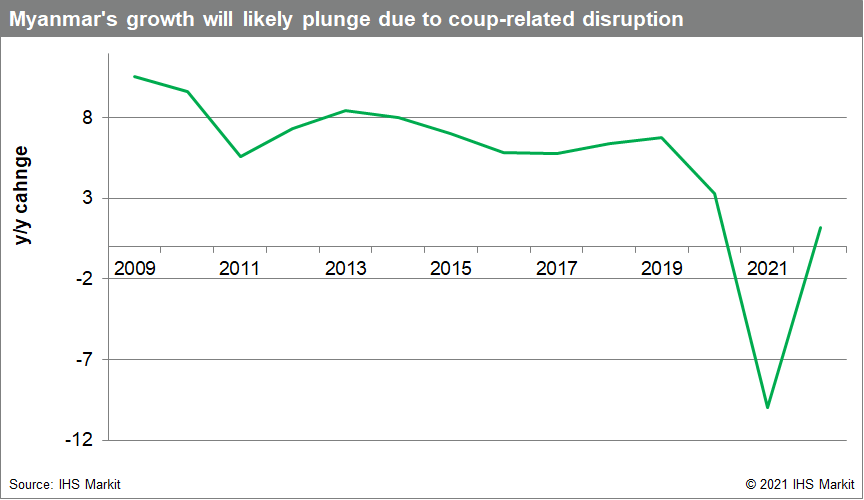 Myanmar military (Tatmadaw)'s Commander-in-Chief, General Min Aung Hlaing, will turn 65 on 3 July, the day he was initially set to retire until he staged the coup on 1 February and scrapped the age condition. The date is a crucial marker for consolidation of the Tatmadaw's authority, indicating that a united military with limited defections would hold power until a time of its choosing. Ousted State Counsellor Aung San Suu Kyi's ongoing trial that started on 14 June relating to several charges including embezzlement and violating COVID-19 restrictions, effectively eliminating her participation from electoral politics, makes the consolidation of the Tatmadaw's authority more likely. Although nationwide anti-coup protests involving hundreds of thousands of people have reduced to a hundred people, opposition to the Tatmadaw's consolidation will likely substantially increase the risk of insurgent attacks over the coming months. This would involve both longstanding Ethnic Armed Organisations (EAOs) and newly formed People's Defence Force (PDF) militias. Local media reports that around 60 PDFs have formed since this coup - a more significant response when compared with previous coups staged in Myanmar. With PDFs reportedly receiving training and arms from EAOs, gunfights with the Tatmadaw will manifest, including sporadic challenges to the military's control of territory. This is more likely in rural areas, but attacks in cities like Yangon and Mandalay will increase should PDFs start coordinating among themselves.