Israel's government coalition has agreed 15 August as the deadline for passing a two-year budget. If it is not passed, the government will be dismissed and new elections scheduled. A budget that does not increase financial support for those affected by the COVID-19 virus pandemic is likely to cause protests demanding the government's resignation, with unemployment having risen from 4% in March to 21% in July. Prime Minister Benjamin Netanyahu is advocating for only a one-year budget covering the 2020-21 fiscal year. However, his coalition partner Benny Gantz is unlikely to approve this, as it would enable Netanyahu to call elections over the subsequent 2021 budget approval process - and therefore avoid ceding the premiership to Gantz in November 2021, as per the coalition government's current agreement. Even if Gantz concedes, the government is still likely to collapse before mid-2021 due to extensive policy agreements. Although Netanyahu's approval ratings fell from 74% in May to 46% in July, the most recent local polls indicate that his Likud party will remain the largest party capable of leading a majority coalition without Gantz. Consequently, Netanyahu is unlikely to approve a two-year budget before the deadline. The 2020 Annual Meetings of the African Development Bank (AfDB) will take place from 25-27 August in Abidjan, Côte d'Ivoire. Topics for discussion will include leadership succession and governance reforms at the AfDB, as well as the implementation of the African Continental Free Trade Area (AfCFTA). The AfDB in June appointed former Irish president Mary Robinson to chair a high-panel group tasked with reviewing the report of the AfDB's Ethics Committee, which cleared the bank's president Akinwumi Adesina over misconduct and corruption allegations, which he denied. Adesina, a former Nigerian cabinet minister, is the sole candidate running for another five-year term at the bank's meeting. The investigations indicate growing rivalry between multilateral and bilateral lenders seeking to play an increasingly influential development financing role in Africa. Separately, implementation of the AfCFTA was originally scheduled to commence on 1 July, but has been tentatively postponed to January 2021 due to the COVID-19 virus pandemic. 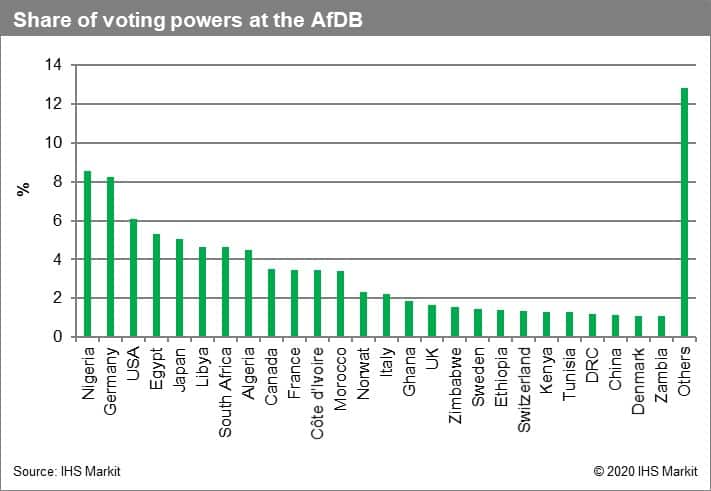 Other events to watch in August