The latest IHS Markit Purchasing Managers' Index (PMI) reading for the Nigerian whole economy issued on 3-4 April is very likely to have declined substantially from the last monthly figure of 58.3 and to be below the previous record low in June 2016 of 41.6, for the same broad reasons: a collapse in the oil price occasioning devaluation of the naira currency. 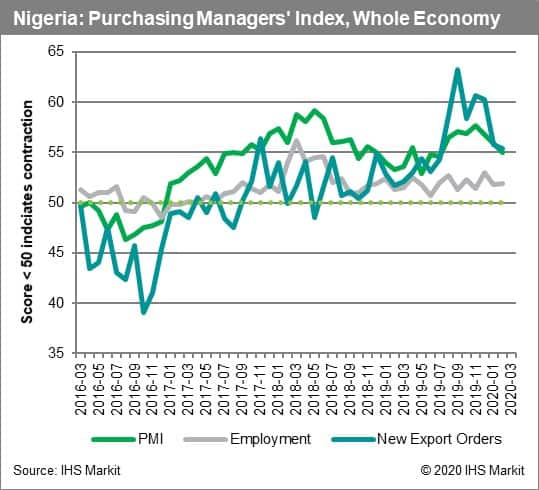 Saudi Arabia intends to lift a nationwide curfew on 13 April that is being imposed for 21 days to reduce the infection rate of COVID-19. The curfew followed additional preventative measures, including grounding flights to the European Union and other Gulf states. The economic impact is likely to be significant, particularly as the measures are being enforced while the Saudi energy ministry has announced that it will increase oil production from April, contributing to a significant drop in global prices.

India's 21-day lockdown to mitigate the spread of the COVID-19 virus is scheduled to end on 15 April, but an extension is very likely. In March, India has seen a spike in the number of cases of people testing positive for the COVID-19 virus, and the lockdown is designed to prevent any exponential growth given India's very high population density of 455 people per square kilometre and poor healthcare infrastructure, with only 80 doctors per 100,000 people. The lockdown effectively halts all business activity in most sectors, with exceptions for essential services.

The United Nations' secretary-general on 24 March told the 'G20' countries that the IMF's financial resources were insufficient and that its Catastrophe Containment and Relief Trust (CCRT) should be expanded. This followed the UN Economic Commission for Africa's secretary-general calling for an IMF USD100-billion emergency assistance package for the effects of the COVID-19 pandemic, and for the IMF to waive all interest payments due on public debt and sovereign bonds, estimated at around USD44 billion for 2020. 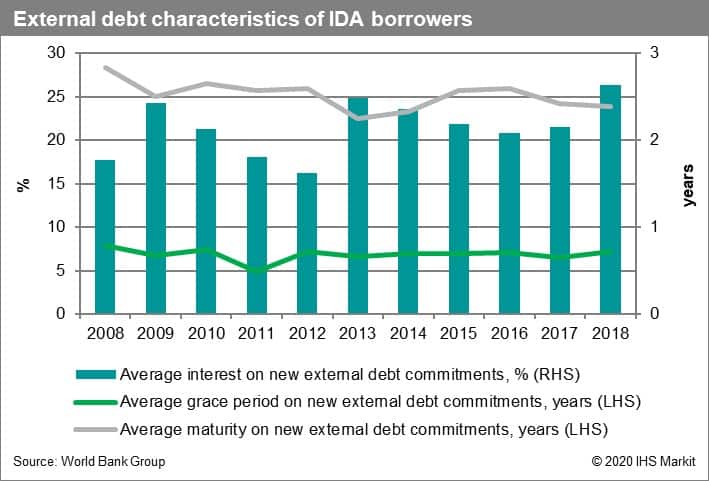 The IMF is very likely before its spring meetings on 17-19 April to deny a USD1-billion loan request from the administration of President Nicolas Maduro to strengthen his government's capacity to deal with the COVID-19 pandemic, despite this being supported by the European Union on 23 March. The request follows a previous IMF refusal on 17 March to consider a proposal by Maduro for a USD5-billion loan on the grounds that there was "no clarity" on the international recognition of his government following fraud allegations over the May 2018 presidential election.