Could Mlima be a turning point for exploration in East Africa?

Eni has stepped up exploration activities in the Lamu Basin in Kenya with the Mlima-1 well, which is targeting a four-way dip closure believed to host well-developed Cretaceous-aged turbidite sandstone reservoirs. The Saipem 1200 drillship has been on location within Block 11B since late December 2021 and is expected to complete drilling operations in February.

Although the well is located along the East African Passive Margin which is gas dominated as it shares similarities with the Rovuma Basin, the chances of an oil discovery are assumed to be higher as Mlima-1 is located only 175 km east of the first and only oil discovery in the region (Sunbird-1). Mlima-1 has the potential to be the first commercial oil discovery in a region where exploration activities to date have almost exclusively resulted in gas discoveries.

The Block 11B PSC was awarded in 2009 and contains profit sharing linked to average daily production and additional profit tax linked to oil price. The impact of these fiscal tools can be seen in the NPV sensitivity chart below (Figure 1) where the price linked additional profits tax constrains the NPV above $75 when compared to the gain between the $55 and $75 $/bbl scenarios. While production rate linked profit sharing has administrative benefits and returns more to the government early in the lifecycle, it is less progressive than profit rate linked profit sharing so doesn't protect the interests of companies when times are hard. This can be seen in the chart where there is minimal deflection of the NPV curves approaching $0 NPV. Perhaps this is in part why, with the government wanting to attract inward investment, the more progressive profit ratio linked profit sharing mechanism was later introduced in the 2015 model contract. 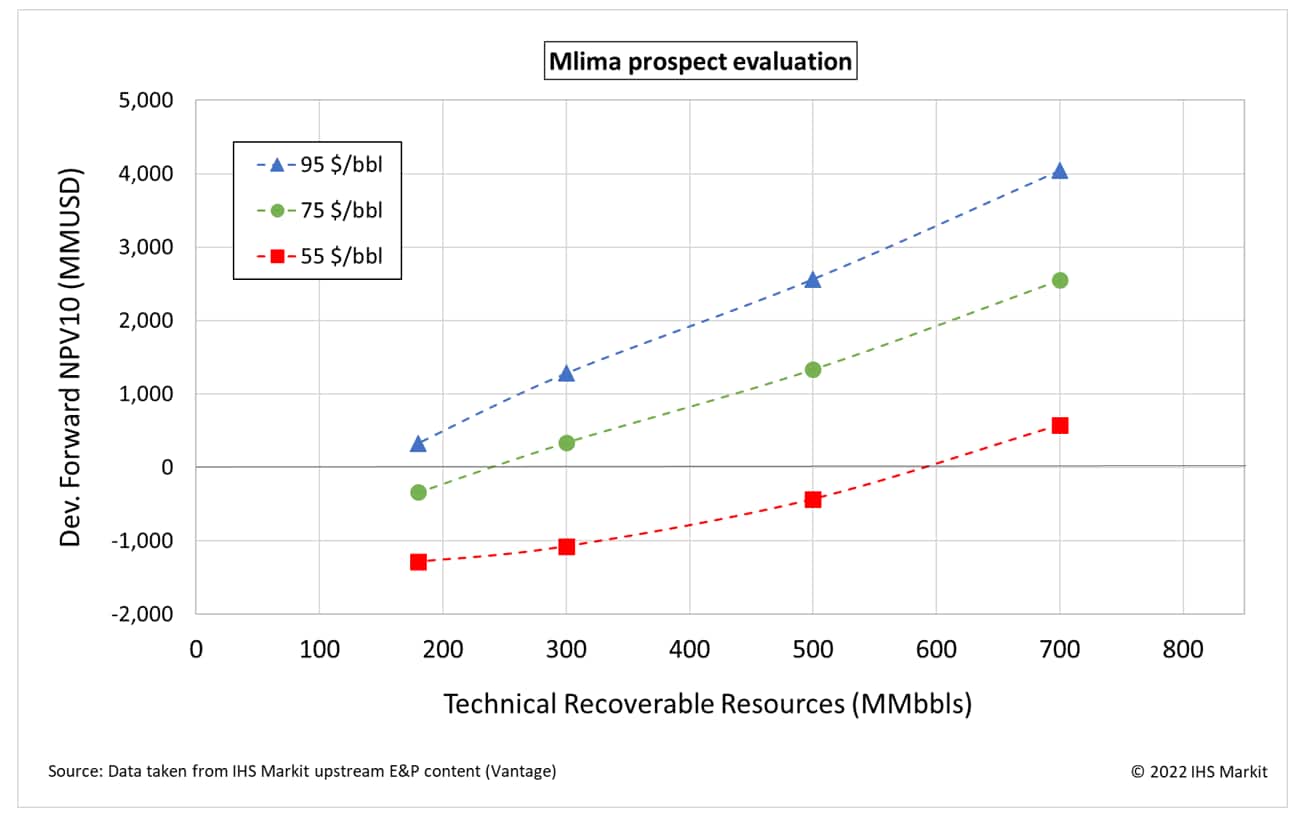 According to local sources, best case recoverable resources of the prospect are estimated to be in the 700 million barrels of oil range. Analysis of the Mlima prospect suggests a minimum economic field size of around 250 MMbbls at $75/bbl and a potential NPV of around $2.5 billion for a discovery at the upper end of the estimate. The fiscal regime in the region suggests that with a break-even price below 50$/bbl Eni is likely targeting a discovery equal to at least 600 MMbbls. If successful, Mlima-1 wildcat will disclose a new East African basin for oil production. The Kenyan Ministry of Petroleum is expecting to announce the results of drilling in the Lamu Basin in the next 1-2 months.