COSCO Shipping & OFAC Sanctions - The Nightmare in the Haystack

The latest edition to the US Department of the Treasury’s Executive Order 13846 on re-imposing sanctions with respect to Iran has led to several major shipping companies being added to the Specially Designated Nationals (SDN) blocked entity list.

The confusion and panic in the tanker markets on the announcement of sanctions against COSCO Shipping Tanker (Dalian) led to a surge in oil shipping rates. The Office of Foreign Asset Control (OFAC) released a short FAQ clarifying the relationships between parent and subsidiary companies within the COSCO tanker family, stating that the COSCO parent is not a sanctioned entity and only entities related to the blocked party that exceed the 50% ownership rule are affected.

Whilst this FAQ cleared up some confusion surrounding sanctions it remains the case that this latest notice is extremely complex and has far-reaching consequences for banks, financial institutions, insurers, charterers and bunker suppliers.

Why has COSCO been singled out?

The vessel in question, named Pacific Bravo, shared the same IMO (9206035) with the vessel Latin Venture. As IMO numbers are unique this was an obvious case of the ‘two’ vessels being the same and a major indication of illicit shipment activity taking place.

The timeline below outlines the changes and activity throughout 2019 for the Pacific Bravo/Latin Venture and changes to its ownership structure. 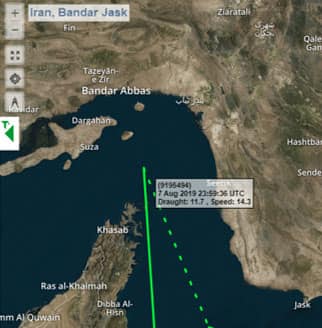 In addition, Kunlun Shipping’s Sea Dolphin (IMO:9195494) whose technical owner and DOC company is COSCO Shipping Seaman Management, appears to have been involved in a suspected port call in the Persian Gulf when its AIS was switched off.

In the map visualisation, Sea Dolphin switched off its AIS for 48 hours in early August when its draught was low and switched it back on with an increased draught when it was out at sea. A suspected loading of cargo in this time period, at an Iranian port, was highly likely.

The evidence against COSCO, its various ‘dark’ AIS outages are one example, led to the OFAC sanctions notice.

Additions to OFAC’s SDN list are a common occurrence but with COSCO there is a high degree of complexity due to the mosaic ownership structure of the company. COSCO Shipping Tanker (Dalian) has at least 26 vessels associated with it and 29 related companies listed as subsidiaries. Its P&I associations are also wide-ranging;

The COSCO parent company, which is not under sanction, manages in excess of 1,000 vessels within a myriad of subsidiary companies. Identifying a sanctioned COSCO vessel and the relevant subsidiary it is attached to in an effort to avoid breaching OFAC sanctions has become extremely difficult and time-consuming.

This is further compounded by OFAC’s 50 percent rule, stating that entities majority owned by the sanctioned company are automatically blocked. For banks, insurers, ship operators and bunker suppliers that do business with a COSCO entity, an in-depth degree of research and investigation is required to ensure compliant activity.

The Iran advisory on petroleum shipping issued by OFAC in September 2019 outlines the risks when working with an organisation such as COSCO. The advisory states that ‘…persons [who] knowingly own, operate, control or insure a vessel transporting crude oil from Iran … could be subject to secondary sanctions.’ Furthermore, the same advisory also states ‘…persons providing bunkering services to vessels transporting petroleum from Iran risk being subject to sanctions…’

The risks are evident when looking at an example vessel such as the Gas Orpheus (IMO: 9046784), which is managed by the company United Amity Ltd. 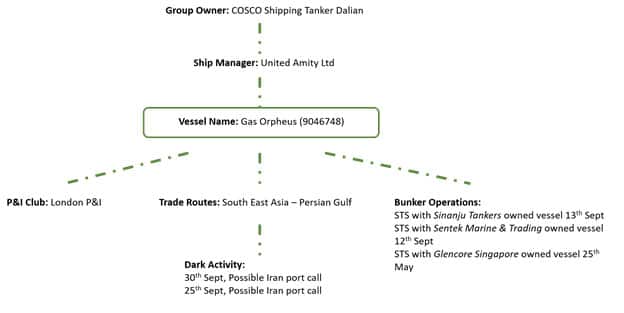 The operations and activity of the Gas Orpheus can have consequences for various parties in the maritime sector; bunker suppliers, insurance providers and banks and financial houses financing cargoes. The need for diligence within these industries and the ability to take a ‘helicopter’ view of the bigger picture is a basic requirement when conducting day-to-day business.

Furthermore, as the chart highlights, Iranian crude oil is still making its way through to China, albeit at a much lower rate prior to the reintroduction of sanctions in May 2019. This current volume of Iranian crude on the sea means that even for an unwitting party the risks remain very real and very high. It will be interesting to evaluate in the coming months if the intended application of sanctions on COSCO entities provide further restrictions on the volume of trade in Iran-China oil shipments.

How to Break Through the Confusion

One of the key takeaways from this new sanction resolution is the enormity of the situation. This is to date the largest set of actions applied to the oil sector and to Iranian trade. The tools needed to understand and unpick which entities are restricted trade parties and which are not have become vitally important.

As this article illustrates:

There is a fine line in managing these tasks in a manner that does not impact core business activity. Certain solutions exist today to be able to uncover the ownership structure of vessel operators and managers, vessel compliance and voyage screening. The key to making this work is a series of algorithmic modules that can be relied upon, at the very least, to identify who owns what, where they trade and what activity they been engaged in.

Without the employment of such technology, businesses operating in global maritime trade are at a disadvantage and open themselves up to OFAC investigation and potential enforcement action.