<span/>For some time, the year 2020 had been circled in the calendars of refiners and other oil industry types because of a global specification change that was due to take place for marine bunker fuels. Specifically, the maximum allowable sulfur content of such fuels dropped from 3.5% by weight to 0.5% on 1 January. Refiners and shippers alike regarded the transition with unease since nearly all of the world's 3.2 million b/d of international bunker fuel consumption was accounted for by higher-sulfur (>0.5%) blends. Would refiners be able to produce enough very-low sulfur fuel oil (VLSFO) to meet demand? If so, at what cost and how would that affect shipping rates? And how would the incremental demand for low-sulfur hydrocarbons affect prices and differentials for the oil industry?

<span/>Obviously, the "big story" of 2020 is no longer a bunker fuel specification change. Coronavirus' (COVID-19) impact on bunker fuel demand has been limited compared to the toll it has taken on road and aviation fuels. In fact, consumption by some shipping sector sub-segments has actually increased this year. Overall, though, marine bunker fuel consumption is down around 5% since the beginning of March, primarily driven by lower container shipping activity and a decimated cruise industry. 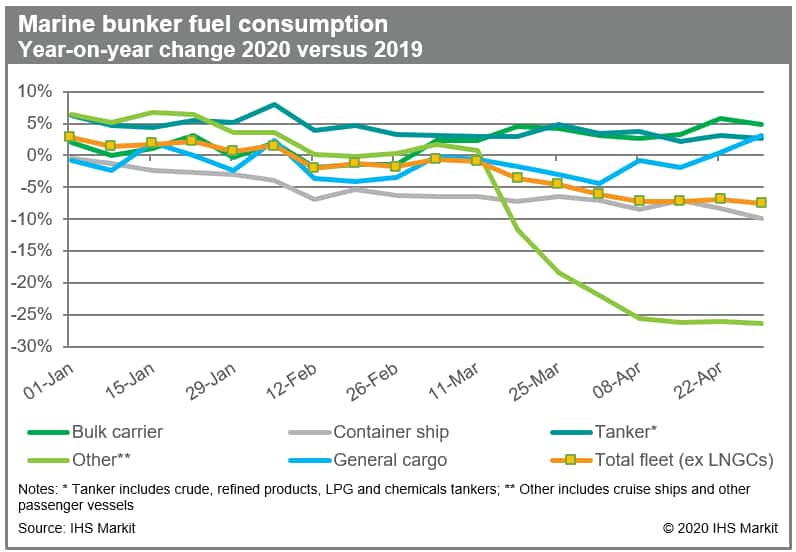 However, the pandemic has had a far bigger impact on the shipping industry by helping to blunt the impact of the specification change. Decreased global demand for gasoline and middle distillates (i.e. diesel and jet fuel) due to COVID-19 has also meant greater availability of low-sulfur feedstocks for blending to create bunker fuels. In fact, there may be too much middle distillate being blended into the VLSFO pool. The average viscosity of the VLSFO pool has declined dramatically in recent months, which could lead to problems because ship engines are generally designed to run higher-viscosity fuels. For now, the shipping industry seems to have no issue with VLSFO, as this fuel is accounting for well over 60% of current bunker demand. Marine gasoil (another low-sulfur fuel) represents around 20% of the bunker market and high-sulfur fuel oil (HSFO, still utilized by vessels that have installed special exhaust scrubbers) just 15%.

Thus, predicted VLSFO supply crunch did not materialize, nor did an anticipated surge in the relative price of VLSFO and marine gasoil. Before COVID-19 rendered all other concerns immaterial, IHS Markit was expecting the differential between low- and high-sulfur bunker fuels would average from $40/b to more than $60/b during 2020, with only slightly narrower differentials during 2021. While VLSFO-HSFO differentials did spike in December 2019, they have narrowed ever since and averaged less than $10/b in Singapore during April.

The previously predicted HSFO surplus amid carriage ban introduction and high refining runs will not materialize either this quarter. Again, the sharp drop in topline refinery throughput due to COVID-19 has meant a sharp decrease in sour residue supply and therefore absolute HSFO production. But the refining industry has done a better than expected job minimizing its HSFO fraction - and increasing its VLSFO yield.

Regardless, the narrower VLSFO-HSFO differential, and overall lack of a supply crunch for low-sulfur bunker fuel, is not likely to change anytime soon. Refinery throughput and global demand will be negatively affected by COVID-19 for at least another year, effectively giving the refining and shipping industries time to "ease into" the new specification.

The narrower differential outlook has changed the economic incentive for shippers to install the specialized sulfur exhaust scrubbing systems that would enable them to burn HSFO. Obviously, the wider the assumed differential, the more it makes sense to invest in a ship's ability to run the cheaper fuel. The narrower differential also means that the previously projected margin boost for high-conversion refineries (i.e. those that can handle high-sulfur crudes) will not materialize. Though, of course, the shipping and refining industries - and, indeed, the world - now have bigger problems to deal with than a new bunker fuel mandate.

The challenge of simultaneously meeting growing global energy demand and reducing greenhouse gas (GHG) emissions has created the platform for a radical energy transition. The transportation sector, where oil demand has become increasingly concentrated, is at the heart of this transition. Read the case study.

Rob Smith is a Director of Global Fuel Retail at IHS Markit.