IHS Markit's PMI surveys indicate that demand is switching from goods to services, but regional divergences in consumer spending remained marked in June - resulting in steep variations in inflation trends.

The global economy expanded rapidly again in June, according to the JPMorgan Global PMI™ (compiled by IHS Markit). Although the rate of expansion slowed slightly, the June gain rounded off the strongest calendar quarter for 15 years and took the recent run of growth into its twelfth consecutive month.

Drilling down, the fastest rate of growth was recorded in the tourism & recreation sector. While this sector had suffered the steepest drop in output during 2020 as many related activities were shut down amid the pandemic, it is now enjoying the strongest rebound of all sectors as these activities are opened up again.

The resurgence of business activity in the tourism & recreation sector has in turn helped drive a 12-year PMI survey record increase in global activity among the broader consumer services industries during June.

With output of consumer goods growing at a slower rate globally in June thanks to weaker new orders growth, the survey therefore hints at demand switching from consumer goods to consumer services. 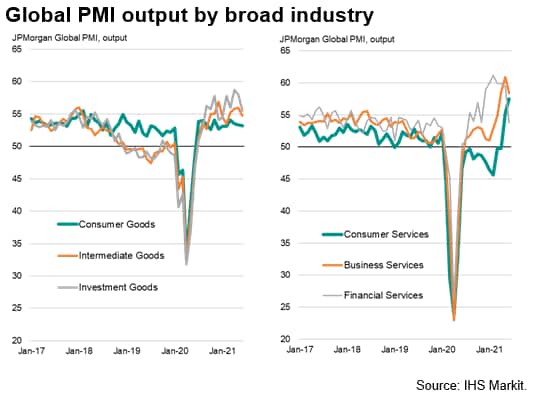 However, there are clearly very different trends in consumer activity by region, with the starkest differential evident between the US and Asia. 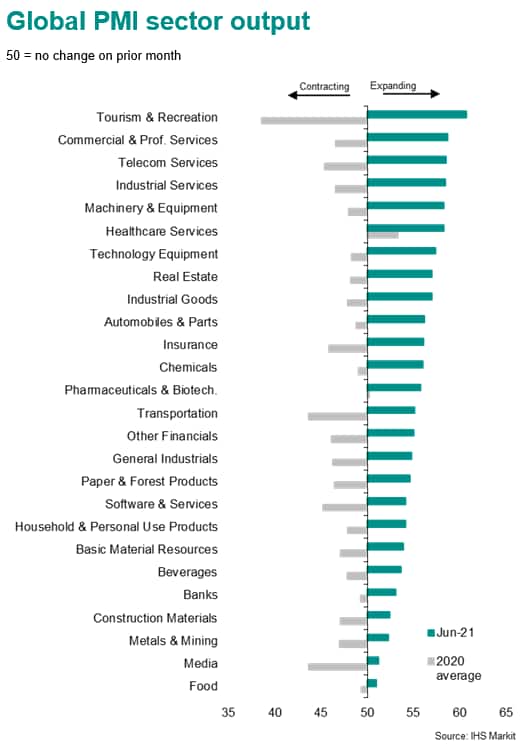 Of the 26 sub-sectors covered by the IHS Markit Global PMI, the fastest expansion was seen for tourism & recreation, reflecting the opening up of these activities which had suffered the biggest output loss in 2020 due to the pandemic. The upturn helped drive a 12-year survey record expansion of overall consumer services output. Especially strong growth was also recorded for commercial & professional services, telecom services and other industrial services.

The fastest manufacturing expansion was recorded for machinery & equipment, followed by tech equipment, in an encouraging sign of rising global business investment expenditure.

The outperformance of the service sector throughout the second quarter has coincided with COVID-related restrictions easing globally on average to the lowest since the pandemic began, albeit with marked variations by region.

While the PMI survey index measuring new orders for consumer services in the US recorded 64.9 in June, signalling the second-strongest expansion in demand since comparable data were first available in 2009 (and beaten only by the surge seen in May), the equivalent index for Asia fell to 44.6, over 20 points below that of the US and indicating a severe decline of a magnitude not seen since May of last year.

These order book variations were matched by similar disparities in output growth, with US consumer service providers ratcheting up business activity levels at a record pace over the second quarter to meet demand, while output fell across Asia.

Similarly, the PMIs gauge of new orders for consumer goods registered a buoyant 62.4 in the US during June but fell to 50.6 - indicating near-stagnation - across Asia. This near-stalling of demand led to the first fall in Asian consumer goods production since June 2020, contrasting with a further surge in US production. 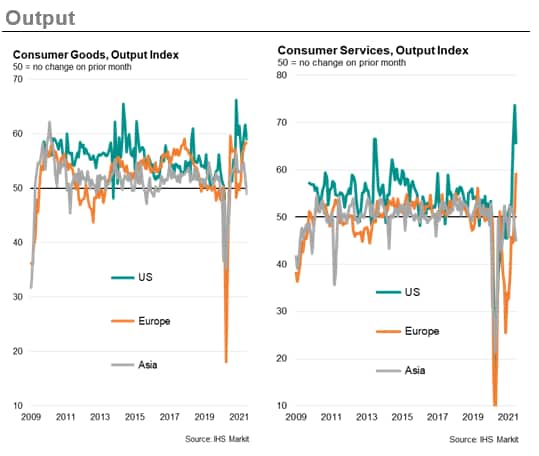 Europe plays catch-up with US

US orders for consumer services started picking up back in February, with growth the surging between March and June. In Europe, it wasn't until May that demand for these services started to recover, but since April the New Orders Index differential with the US has narrowed from 23.6 to 4.1.

Similarly for consumer goods, the PMI New Orders Index for Europe now lags that of the US by just 3.1 points compared to an 11.7 spread at the start of the year. Output growth has narrowed even further. 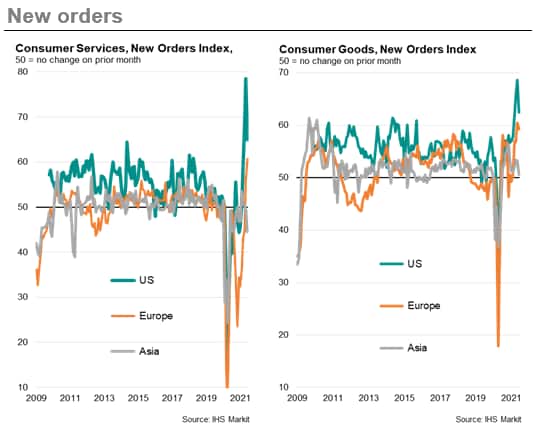 A corollary of the variations in demand has been a wide discrepancy in price trends. Prices charged for consumer goods and services in the US have been rising during the second quarter at a rate unprecedented over the 12-year survey history, with service sector prices in particular surpassing prior peaks by a wide margin. In Asia, in contrast, prices charged for consumer services were unchanged in June, and rose only modestly for goods.

However, European prices are now also spiking higher. Prices charted for consumer services in Europe rose for a second month in June, growing at the sharpest rate since October 2018 as recovering demand generated increased pricing power. Prices charged for goods rose at an even steeper pace, with the rate of inflation hitting an all-time high as demand exceeded supply for many products. 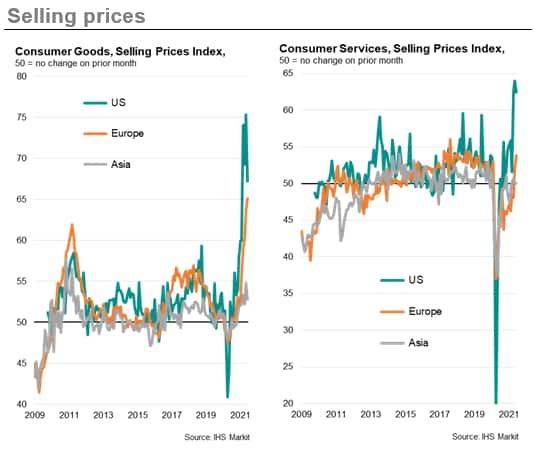 One encouraging sign from the US is that growth of demand for consumer goods and services cooled in June from May's record peaks, resulting in an easing of price pressures. It is too early to say whether this represents the start of a downward trend in price pressures as the rebound in demand from lockdowns fades. There is also much uncertainty with respect to the impact of new supply disruptions emanating from Asia, as well as questions over the role that post-pandemic labour market participation rates will play in shaping second-round inflation effects. But for now, the easing in US price pressures is a welcome development.