Consumer, not industrial, will be easiest point of entry for transformative technologies

If six of today's most powerful transformative technologies were tracked to gauge both their readiness for adoption and their potential impact across six important industries, what would the findings reveal?

This was the specific mission underlying Digital Orbit. The six technologies are Artificial Intelligence (AI), Blockchain, IoT, Video Everywhere, the Cloud and Virtualization, and 5G. The six industries include automotive, manufacturing, healthcare, telecommunications, energy, and consumer.

The extensive results from Digital Orbit indicate that the consumer market presents the most accessible path of entry for most transformative technologies, as shown by the graphic below, followed by the telecommunications and the automotive sectors. This is true when factors such as the culture, readiness, and investment trends of a specific market are considered. 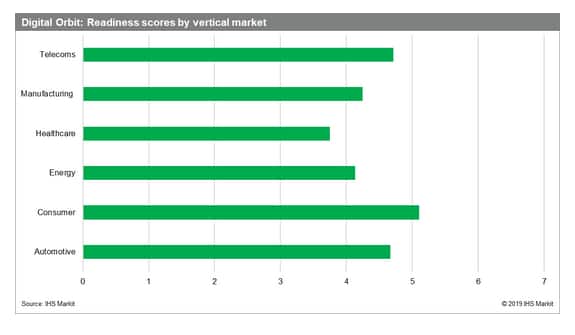 It was the consumer market, for instance, that warmed immediately to IoT as shoppers fervidly embraced IoT devices. In fact, the consumer segment represents more than 50% of the current IoT installed base, counting smartphones in the group. In Video Everywhere, the consumer segment accounted for more than $500 billion in revenue in 2018, far more than any other sector. In AI, smart speakers make up one of the highest-volume applications to date, with 39 million units shipped in 2018. The consumer industry will likewise be at the forefront of adopting 5G, as initial deployments align most tightly with consumer needs.

Several reasons explain why consumer is the most porous layer among all sectors for transformative technologies to penetrate. Product development is quicker and replacement cycles are shorter in the consumer segment, compared to the much longer times involved in the industrial sector because of its relatively conservative nature. Moreover, concerns related to privacy and liability are far less burdensome in the consumer arena than in the industrial space. In automotive and healthcare, for instance, the premature adoption of a technology that subsequently fails can have devastating public health and safety repercussions.

The beginning of the slowdown

While the consumer segment has been quicker than the industrial sector in adopting transformative technologies, the tide will start to change soon for some technologies. In IoT, for instance, the consumer markets will begin to saturate by 2020 to 2030, with the compound annual growth rate (CAGR) for consumer-related devices during this period topping at approximately 17%.

During this time, however, IoT and other transformative technologies will start to be adopted in earnest by segments like energy and manufacturing. The CAGR for industrial-related devices during the same 10-year period is projected to reach 25%.