Compact MPVs gain in popularity in Japan during H1

The multi-purpose vehicle segment gained market share in Japan during the first six months of 2017 as demand picked up with the launch of new models.

The share of the multi-purpose vehicle (MPV) segment, traditionally one of the key categories in the Japanese new vehicle market, reached 39.2% during 2016. This marked a decline from 41.8% in 2014 and 40.4% in 2015. The Japanese government raised consumption tax from 5% to 8% in April 2014, the first increase in 17 years, and this was followed by another dampener in the form of a 50% increase in minivehicle ownership tax in April 2015. The overall new vehicle market subsequently suffered, posting a 9.5% year-on-year (y/y) contraction in 2015 followed by a slight recovery of 3.0% in 2016. Furthermore, as minivehicles became costlier after the ownership tax rise, consumers began to favour other car types, including sport utility vehicles (SUVs). The change in consumer preference is reflected in the continuous rise in market share of the SUV segment, which grew for a fourth consecutive year in 2016 to 12.5% of total sales of nearly 4.85 million units. The SUV segment began to gain particular momentum during 2014, when its share nearly doubled from 5.4% in 2013 to 10.1%, according to IHS Markit light-vehicle data. This also represented the biggest gain in market share (0.8 percentage point) during the year of all the segments.

Within the MPV segment in Japan, the A-MPV category accounted for the lion's share with 50% of the segment's sales of 1.89 million units in 2016. This sub-segment fared very well thanks to its low price points and the range of model offerings. The relatively compact size of vehicles in this segment is attractive for those living in crowded cities. Although the A-MPV segment held the largest share during 2016, its share declined from 54.2% in 2015 amid an increase in the number of model offerings in the B-MPV segment. The B-MPV segment's share grew from 16.3% in 2015 to 20.7% in 2016. Other key MPV segments include the D-MPV segment, which held a 26.9% share of MPV sales during 2016, almost unchanged from 2015.

Looking ahead, we forecast that the share of the MPV segment in Japan will rise for the first time in four years during 2017. According to IHS Markit light-vehicle data, the segment's share will increase from 39.2% to 42.7%. The segment will gain traction during the year mainly from new model launches, particularly in the B-MPV category. Commenting on the key models, Yoshiaki Kawano, a Tokyo-based senior analyst with IHS Markit, said that Toyota's Roomy/Tank, Daihatsu's Thor, Subaru's Justy, and the refreshed Honda Freed are likely to remain popular during 2017. All of these models were launched in the country during late 2016. Sales of Toyota's Roomy and Tank are expected to total 72,854 and 66,092 units, respectively, this year and the Daihatsu Thor, Subaru Justy, and Honda Freed are projected to sell 12,350, 5,414, and 118,803 units, respectively, according to IHS Markit data. Overall, the B-MPV segment is expected to record combined sales volumes of nearly 592,550 units (up 51.0% y/y) during 2017. Its share of total MPV sales will grow from 20.7% in 2016 to 27.4% in 2017, surpassing the D-MPV category's share of 22.8% for the first time. 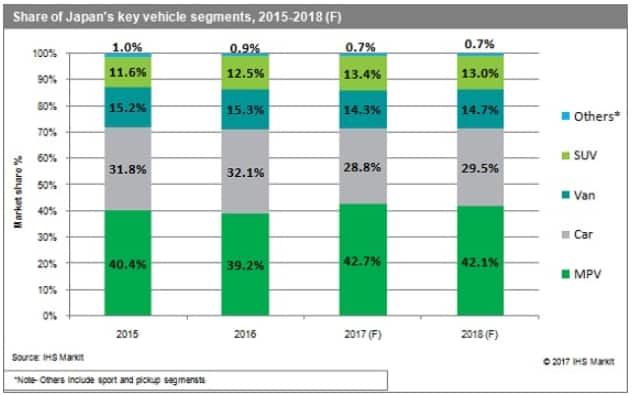 As for SUVs, we forecast that this segment will continue to record growth in 2017 and will account for a total share of 13.4% with sales of 679,910 units, up nearly 12.4% y/y. Affordability, ease of handling, and better fuel economy, coupled with the traditional requirement for compact vehicles in Japan's crowded urban areas, are some of the key drivers behind this growth. Among the recently launched B-segment SUV models expected to post encouraging sales during 2017 is Toyota's new C-HR SUV series, which also includes a hybrid variant. We expect the model to perform well with volumes of 115,381 units, helping to boost the market share of this sub-segment to 37.9% of total SUV sales during 2017 from 26.0% in 2016. The market shares of all the other SUV segments are expected to decline this year, with the A segment accounting for 19.3% of total SUV sales (down from 26.4% in 2016), the C segment 24.4% (down from 26.6%), the D segment 6.4% (down from 7.4%), and the E segment 12.0% (down from 13.4%).

IHS Markit currently forecasts that light-vehicle sales in Japan will total more than 5.057 million units during 2017, up 4.3% y/y. This growth can be attributed to factors such as a gradual recovery in minicar sales and the continuation of "eco-car" tax benefits. In a bid to promote and support eco-car sales, the government extended the current eco-car tax breaks for another two years from April 2017 to April 2019, accompanied by more stringent fuel-economy standards.