This month marked the launch of our Price & Supply Monitor, a new report designed to track global commodity price pressures and supply shortages. Our monthly research features a suite of key indicators for the metals, chemicals and energy categories.

The price indices have been derived from IHS Markit's Pricing & Purchasing datasets. Commodity supply pressures are monitored in the monthly Purchasing Managers' Index (PMI) surveys, which are highly-regarded for providing accurate and timely data on worldwide economic trends.

The most recent data reveal a broad-based rise in commodity prices over the course of September, led by a spike in chemicals following supply disruptions in Texas related to Hurricanes Irma and Harvey.

However, there are signs that global supply worries have been somewhat overdone, with speculation playing a strong role in recent commodity price rises.

Survey data from IHS Markit's worldwide PMI surveys signalled that incidences of supply shortages are below their respective long-run trends for 10 out of the 12 monitored commodities.

Reports of energy and oil-related supply shortages were particularly muted, as were those for metals. Chemicals were of course the main exception, reflecting US supply disruption and a continuing rebound in demand across European markets.

Copper and zinc prices both hit multi-year highs during September, with zinc reaching $3154 /MT, the highest price since the global financial crisis.

Despite cuts to zinc production capacity in recent years, there was only a nominal level of supply shortages registered by the latest Price & Supply monitor. A slight uptick in supply pressures was recorded in September, but the extent of zinc shortages worldwide remained well below historical averages.

Copper supply fears have been sparked by industrial action at mines in Chile and Indonesia earlier this year. This saw a spike in reports of copper supply shortages to a six-year peak in the first half of 2017, but pressures now appear to have eased.

The latest data indicate a divergence between the copper price and supply factors monitored by IHS Markit. A stronger price trend in recent months against a backdrop of moderating copper shortages therefore suggests a degree of speculative pricing. 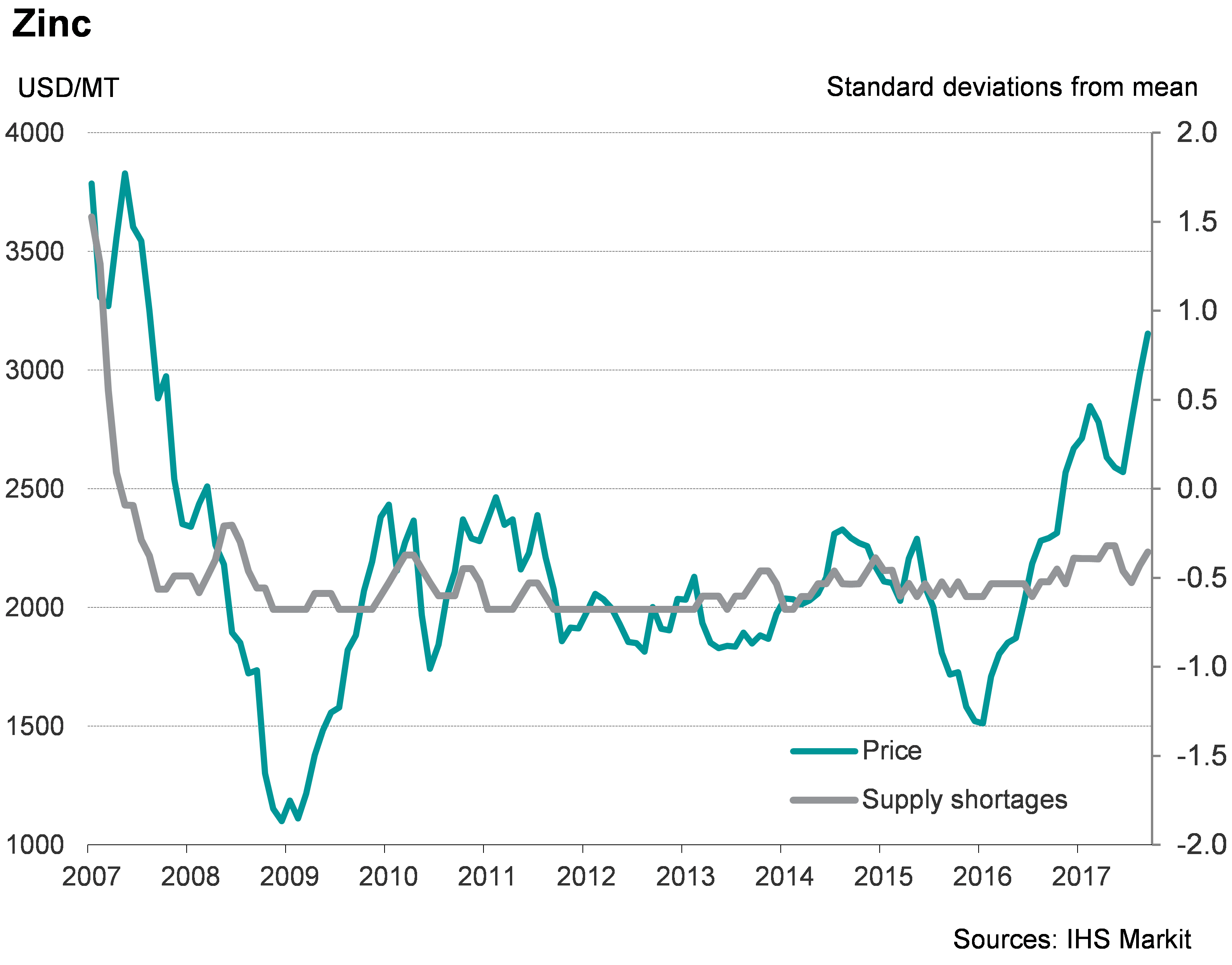 Impact of Hurricanes Irma and Harvey on chemicals supply

The composite chemicals indicator monitored in the Price & Supply Monitor signalled only a slight uptick in global supply shortages, albeit from an already elevated level. Incidences of chemicals supply shortages have been running at decade-highs in 2017, partly driven by a recovery in European demand earlier in the year.

The price of chemicals rose sharply (+16.7% in September) due to speculation around supply. Furthermore, survey respondents to the PMI surveys noted that chemical suppliers had raised charges whilst overwhelmingly citing the hurricane impact as a reason for the spike in prices.

The global polyethylene data registered a moderate uptick in the number of supply shortage incidences since the previous month and a 25% rise in prices, driven by reports of supply issues by manufacturers in the US and Canada. That said, on a worldwide basis, PMI reports citing polyethylene supply shortage were broadly similar to historical averages, which suggests a degree of speculative pricing in September. 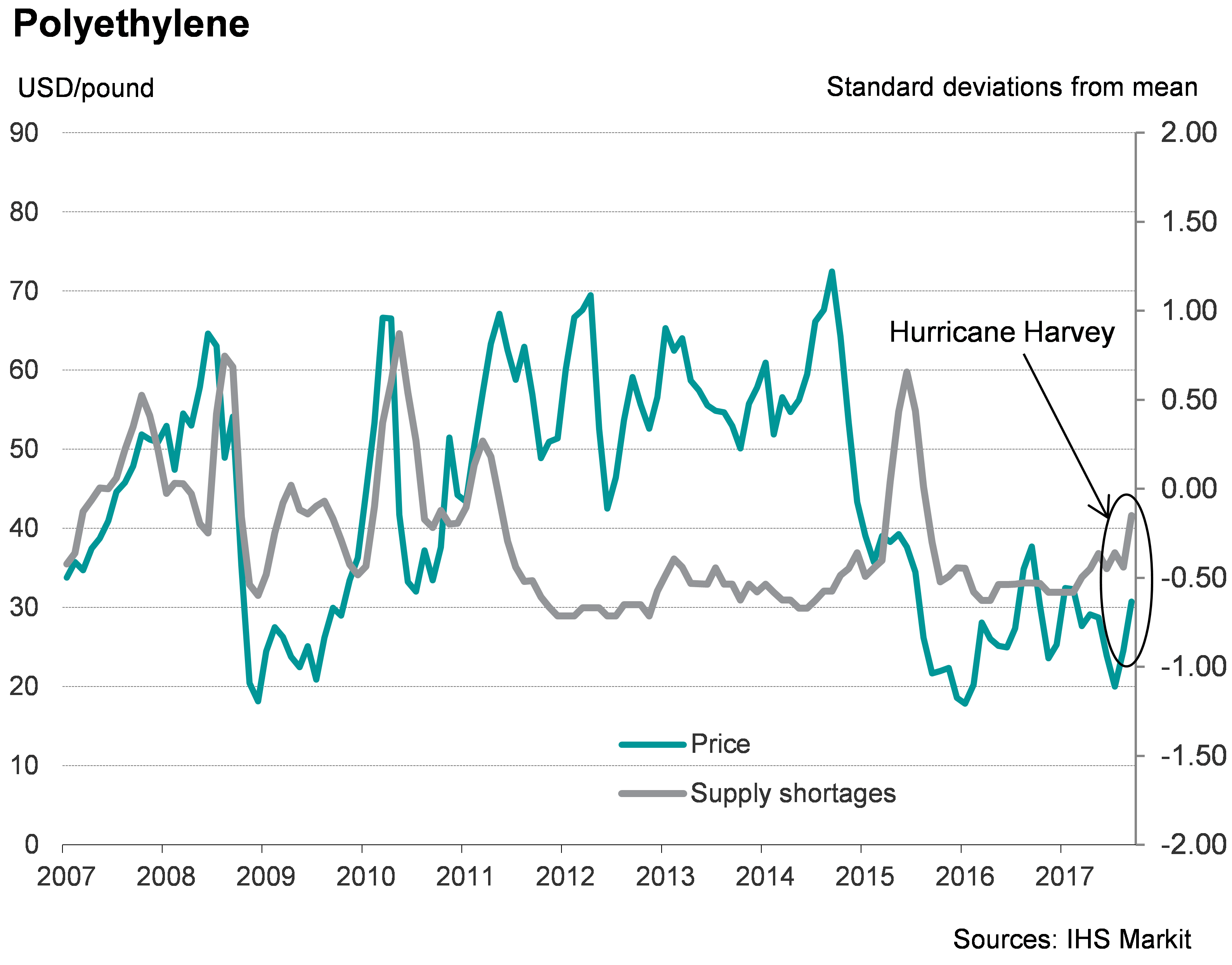 At 55.5 USD/Barrel, crude oil prices rose to a 7-month high during September. Supply shortage data suggested that the availability of oil compared favourably with the historical average.

Anecdotal evidence from manufacturing firms noted that a recovery in euro area demand and speculation were key factors behind oil price rises. Furthermore, speculative pricing based on supply worries continued to be fuelled by political uncertainty in the Middle East.

The Price & Supply Monitor is available each month to IHS Markit's global Pricing & Purchasing Subscribers and PMI panel members. The next report will be released on 13th November 2017.

If you have questions about the Price & Supply Monitor, please contact us at ECR@ihsmarkit.com.

The slow rollout of the COVID-19 vaccine program in the sub-Saharan African (SSA) region will continue to pose a ri… https://t.co/tGfbn1AEWk

Are we finally seeing some weak signals that #commodityprices may be stabilizing? Our experts share what they are s… https://t.co/eS8LdYN9d2