Positive stories about the CDS market are few and far between in contemporary mainstream media. This is not surprising - an article about nefarious hedge funds no doubt generates more hits than a conventional account of market activity.

But that doesn't mean the mundane aspects of finance should be overlooked. A prime example is ISDA's study of the global CDS market published last month. It's main finding - single name activity has been stable since 2016 - was never likely to make the Six O'Clock news. Yet it deserves some comment as it runs counter to the negative tone prevalent around CDS.

ISDA's analysis of the CDS market looked at market risk transfer activity - genuine risk forming trades - from 2014 to 2019. It found that after a precipitous decline in 2015, single name volumes started to stabilise from 2016. 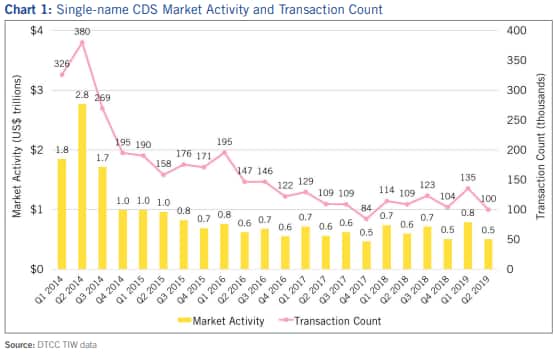 Activity in CDS indices, such as the Markit iTraxx and CDX families, has increased markedly and is now back to 2014 levels. 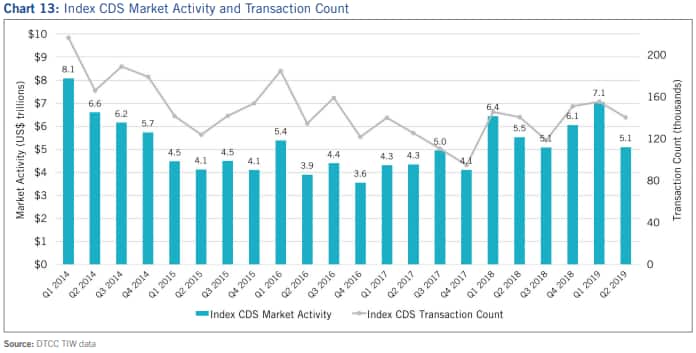 What's driving these underreported trends? If we take single names first, it's worth reiterating why institutions use single names:

Given these incentives, it's evident why single names are still highly relevant. Since 2016, several key events - Brexit, Trump election - have rattled the markets, exacerbating underlying problems with a lack of demand and ongoing imbalance in the global economy (secular stagnation anyone?). Central banks have expanded their balance sheets enormously and kept rates unprecedentedly low, which has kept bond yields at very low levels.

But monetary policy is losing its efficacy and prudent investors need to position for a likely turn in the credit cycle and rise in default rates. This is where CDS single names come into their own - there is no better instrument for hedging idiosyncratic risk.

They are also ideally suited for hedging counterparty credit risk. Perhaps it is not widely understood, but bank CVA desks constitute a large portion of demand for single name CDS and have done for some time. The use of CDS in this process is enshrined in Basel CVA regulations and all major regulators mandate its use as a measure of default probabilities.

As well as hedging, investors use CDS to implement strategies that are technically difficult in the cash market. An alternative UCITs fund, for example, may want to employ a long-short strategy in European credit. Theoretically this can be done in the bond market but often investors will encounter liquidity hurdles that cannot be overcome except by using a synthetic instrument such as CDS. There are some CDS index constituents that have only one or two bonds outstanding, making the practical implementation of relative value plays through cash unamenable.

So, the hedging capacity and applicability for certain trading strategies, combined with the volatile macroeconomic picture, has created conditions that stabilised single name activity. These factors also apply to CDS indices. And yet one may ask why volumes have risen faster in indices than single names? The factors highlighted for single names are all pertinent to indices. But the latter attract a far broader range of investors, who find their macro-hedging suitability and strong liquidity appealing. They are not the only instrument that can hedge macro credit risk; TRS and ETFs have gained ground in recent years. Yet the recent rise in CDS index volumes shows that they are still the instrument of choice for many investors.

ISDA's CDS Study was hardly a glowing reflection of CDS and we shouldn't sugar coat the state of the market. The increasing concentration of activity in certain single names is a concern and a trend that could be exacerbated by FRTB risk factor modellability rules (making it even more important that banks have access to as much high quality transaction data as possible through a robust solution). Nonetheless, it's worth stating that the vast majority of CDS end users don't have iniquitous designs and continue to use the product as it was intended. Sometimes there is beauty in the mundane.

Energy markets are in transition, and investors are retreating. Read our global study on investor attitudes towards… https://t.co/M6R56c7u8j

Register today for our London breakfast roundtable on January 29th where we will discuss the emerging trends, risks… https://t.co/GKwIVrOry0

With the #initialmargin phase five deadline coming up in September, our UMR expert Hiroshi Tanase, has shared some… https://t.co/YjSFPoxCF5