Results published by the Registraduría Nacional del Estado Civil indicate that Iván Duque secured 54% of the vote versus 41.8% for Gustavo Petro. Duque will take office on 7 August. The Democratic Centre (Centro Democrático) party, which secured 35 of 171 Lower House and 19 of 107 Upper House seats respectively is short of a majority and will need to form a coalition government to avoid the limitations of legislating by decree. Following the first round of the presidential election, Duque received endorsements from the Liberal Party (Partido Liberal: PL) and the Radical Change (Cambio Radical: CR) party (although a small minority of their representatives are rebelling and will go into opposition), alongside existing support from the Conservative Party (Conservador Colombiano: CC) and the Independent Movement of Absolute Renovation (Movimiento Independiente de Renovación Absoluta: MIRA) party, and his party is now negotiating with these parties to form a grand coalition. If Duque is successful in building a majority coalition, it is likely to take a very similar shape to the outgoing National Unity coalition, except for outgoing President Juan Manuel Santos's Partido de la U.

Economic policy
Duque's economic policy priorities include a reduction in public expenditure, a drive to tackle tax evasion, a corporation tax cut from 33% to 28%, conditional support for extractive industries, and an acceleration of infrastructure development. These policies are unlikely to prove controversial to the CD's likely coalition partners, although there are likely to be disagreements over the extent to which a budget deficit reduction target to 1% of GDP by 2023 should be compromised in order to pay for tax cuts if the government is unable to balance the budget through anti-evasion initiatives and austerity measures.

Corruption
Duque has made tackling corruption a central theme of his election campaign. He supports a referendum scheduled for 26 August that, if approved, would create harsher sentences for those guilty of corruption. He has pledged to audit existing infrastructure projects to ensure existing contracts are being fulfilled. The centrist and left-of-center opposition have also been vocal on tackling corruption, and are likely to support any efforts to tackle it. However, his ability to make a significant effect on levels of corruption in Colombia is likely to be curtailed by the composition of his coalition given that most of the parties that will make it up are also in the outgoing government. One exception is the Partido de la U, which, as a result, is likely to attract greater scrutiny.

Legal and judicial reform
Duque is proposing several legal and judicial policies to amend the peace agreement reached between the outgoing government and the Fuerzas Armadas Revolucionarias de Colombia (FARC) in November 2016. These include amending the agreement so that drug trafficking is treated as an ordinary crime and limiting the right to political participation to those convicted of serious war crimes. He also wants to block implementing legislation relating to transitional justice mechanism, the Special Jurisdiction for Peace (Jurisdicción Especial para la Paz: JEP) and an increase to forced coca eradication. His ability to implement these policies is likely to be moderate. The CR, PL, and CC all supported the agreement originally and have pledged ongoing support to the peace process and are likely to frustrate any initiatives that put the process at risk, particularly if there is evidence of large numbers of FARC abandoning the process. 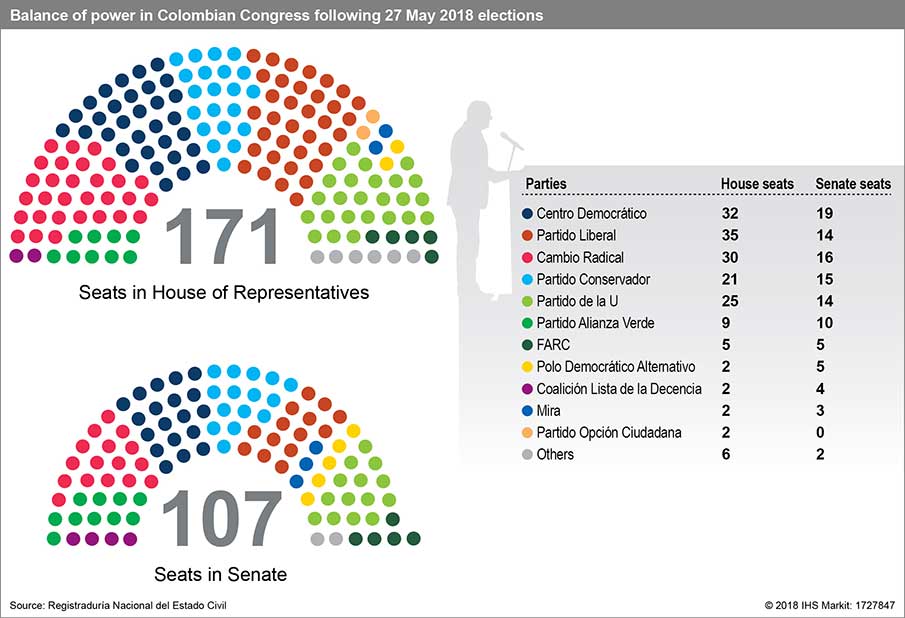 Outlook and implications
With the likely support of a multi-party coalition, Duque's government is likely to be stable. During his victory speech, he talked of the importance of building consensus; several of his more controversial backers, including former president Álvaro Uribe and Andrés Pastrana, were notably absent when he delivered the speech. If a consensus government is formed, it is likely to broadly support his economic plans but is likely to be more guarded around amending the FARC peace agreement. Although some anti-corruption initiatives are likely (not least because of the scheduled referendum, if approved will force the government to adopt tougher measures) they are likely to be frustrated if they threaten coalition allies. Over the coming weeks Duque will announce his cabinet while Congress will nominate its House and Senate presidents. The composition of these will be a strong indicator of the government's future policy priorities and stability. Main figures to watch are Uribe, whose inclusion in the cabinet would be highly divisive and undermine the government's stability; and Germán Vargas Lleras, a defeated presidential candidate who retains considerable influence through his CR party, the third-largest in Congress - if he receives an important portfolio, such as defense, or ministry of the interior, it will likely improve the government's stability and his CR party is more likely to stick with the coalition. The appointment of justice minister, who will be crucial in implementing any amendment to the FARC peace agreement, will indicate to what extent the incoming government is serious about amending the agreement.