As per IHS Markit Commodities at Sea, Colombian coal and coke shipments during March 2021 stood at 5.5mt (5.3mt on the 30-Day basis) versus 6.8mt (30-Day basis) a year ago. Among the major miners, actual shipments from Drummond, Puerto Bolivar, and Puerto Nuevo stood at 2.9mt, 2mt, and nil, respectively.

In terms of import regions (during March 2021), Colombian coal and coke shipments declined to the Mediterranean (1.1mt, down 17 percent y/y on a 30-Day basis), WC South America (0.5mt, down 25 percent), Black Sea (0.2mt, down 45 percent). Shipments to the Indian subcontinent and East China were at 197kt and nil, respectively in March 2021 versus 1.2mt and 0.4mt, respectively a year ago. During the reported month, Colombian shipments increased to NW Europe (0.6mt, up 128 percent y/y on a 30-Day basis), JKT (1.1mt, up 26 percent), EC South America (0.9mt, up 40 percent), EC Central America (0.6mt, up 40 percent). The strength in Colombian thermal coal flows to NW Europe could be linked to low stockpiles at the ARA terminals. As per IHS Markit CMM, combined coal stockpiles at Amsterdam-Rotterdam-Antwerp (ARA) terminals had fallen to a 4-1/2-year low of 3.8mt in early March 2021.

As per IHS Markit Coal, Metal and Mining database delivered 6000 NAR thermal coal prices to Mainland China from Colombia was quite competitive versus Australia, South Africa, and Indonesia with delivered price at the end of week-13,2021 calculated at $91.3/t (up 4 percent m/m), $108.6/t (up 10 percent), $112.6/t (up 9 percent) and $100.7/t (up 5 percent), respectively. In February 2021 also Colombian thermal coal was quite competitive over Australian, South African, and Indonesian coal. Despite Colombian coal being quite competitive to Mainland China over other major origins still, there was an annual decline due to the tight supply of Colombian coal in the spot market.

During the first four days of April 2021, there were no vessel sailings from Puerto Drummond. As of 5 April, MV PAN IRIS (175,010 dwt) is currently moored at the Puerto Drummond. Halt in loadings during the early four days of the running month could be an attempt by Drummond to build up its port stockpiles which have moved down from 1,176kt (as of 22 March) to 739kt (29 March 2021). As per CAS port stocks database, thermal coal stockpiles at Puerto Bolivar were also low and stood at 284kt (as of 22 March 2021) from 68kt (as of 18 March 2021). 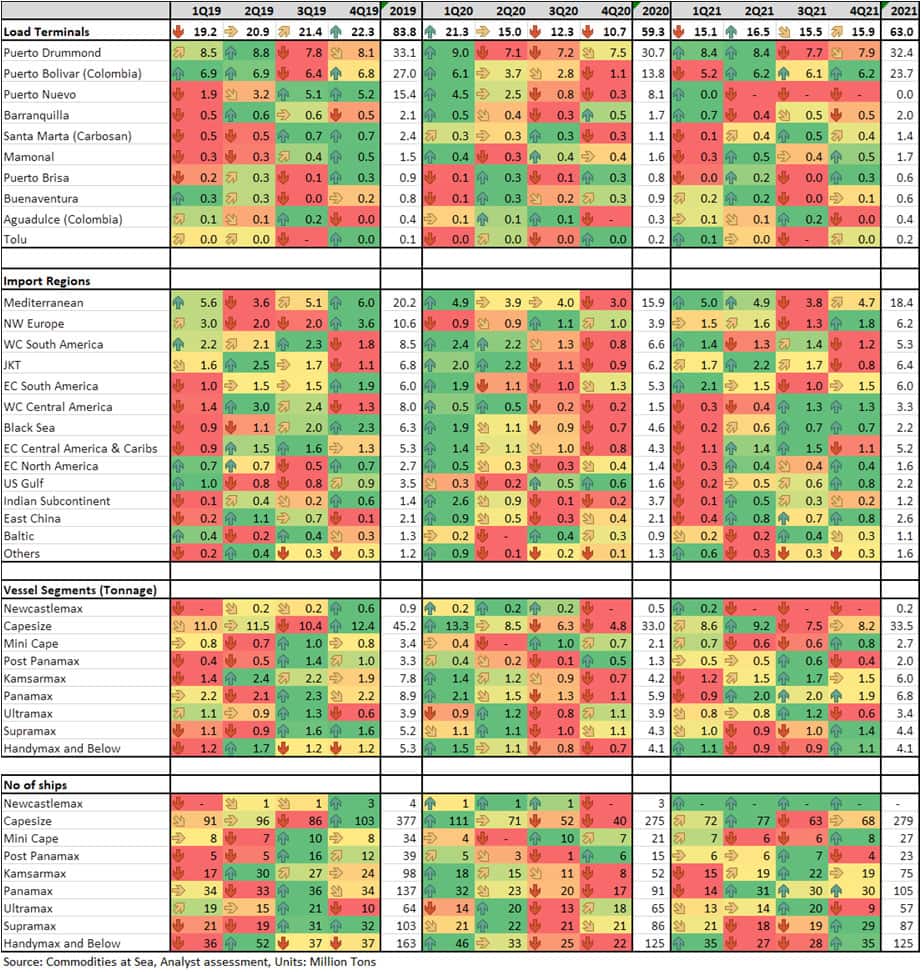 About 3 months ago, a mainstream news outlet reported on an expected U.S. import shipment of corn from Turkey, due… https://t.co/sGUA0E248y