Southeast Asian markets have been perceived as the next frontier for coal-fired power plant development. Coal has been valued for its ability to provide low-cost base-load power, which is essential in Southeast Asia. Up to 2030, there are many new projects under construction and others in different stages of development that will double the coal-fired power capacity in the region.

However, declining costs and increased deployment of solar photovoltaic (PV) projects, combined with dwindling options for developers to permit, finance, and construct new coal plants, are resulting in many countries in the region reducing the contribution of coal in their future fuel mix.

IHS Markit expects construction of new coal plants to slow down. After 2030, new coal-fired power projects will be sporadic and limited to places where no other viable options exist. Challenging business conditions contributing to this slowdown in new coal build projects as more banks balk at financing new coal projects, joined by governments choosing to pursue greener pathways. Original equipment manufacturers (OEMs) and engineering, procurement, and construction (EPC) firms are also scaling back their capability to manufacture and build coal plants owing to declining business prospects.

For projects already in the development pipeline, therefore, it is a race against time to materialize the current project pipeline, given the increasingly hostile environment against new coal plant development.

Despite this, major retirement waves of coal plants will unlikely occur in Southeast Asia, as coal offers diversity and acts as a natural hedge against higher gas prices and the variability of renewables. Furthermore, as coal supply is expected to tighten after 2030, those newer, more efficient coal plants will operate at higher utilization to maximize electricity output. 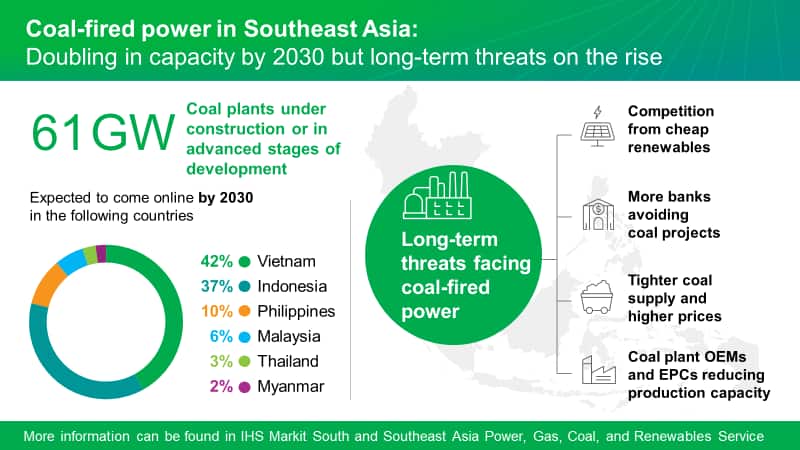 Clients can find the full report by logging into Connect.