Digital Orbit is an executive briefing from IHS Markit that tracks the readiness and impact of six transformative technologies across key industries. In the seventh and final installment of this series, we find out why Cloud & Virtualization ranks as the technology deemed most ready for industry adoption.

Artificial Intelligence may be more exciting and 5G more eagerly awaited, but it is Cloud & Virtualization that both IHS Markit analysts and key business leaders deem readiest for industry adoption out of six of the most powerful transformative technologies today.

That conclusion is among the many significant findings that can be found in Digital Orbit, the IHS Markit executive briefing that tracks the readiness of industries in adopting the technologies and their projected impact on industry. In addition to the three technologies above, the group of six includes Blockchain, Video Everywhere, and IoT. Together, the six significant forces of change are converging in unexpected ways to unlock new possibilities while also dismantling barriers among once-separate technologies. In doing so, the technologies promise to completely rewrite the playbook on how people live their lives and conduct business.

Among the six technologies, Cloud & Virtualization obtained the highest readiness score given its relative technical maturity, proven usability, and wide range of established use cases.

Available for more than a decade, Cloud & Virtualization has an established presence in the enterprise, and companies have had time to become comfortable in adopting the technology. And along with IoT, the Cloud & Virtualization technology has the highest percentage of projects moving beyond the proof-of-concept stage into full deployment. Last year, the value of the off-premises cloud services market amounted to $270 billion.

The high standing of Cloud & Virtualization reflects the increasing tendency of enterprises to migrate applications to the cloud as a service, rather than maintaining the applications in-house or developing in-house skills. For many firms, the migration is made to improve agility, reap cost savings, and gain access to the latest technology.

Moreover, the often-heavy capital expenditure required upfront—to purchase servers, develop in-house expertise, and maintain services within the premises—can be avoided. Instead, cloud services can be treated as an operating expenditure, allowing a shift from investing in equipment and staff to leveraging the automated datacenter (DC) infrastructure of a cloud service provider (CSP), supported by highly skilled DC experts.

Meanwhile, virtualization and a computer networking approach known as software-defined networking (SDN) can leverage a shared pool of resources, such as those for compute—including specialized co-processors—as well as for storage and networking, paving the way for large-scale operational efficiencies.

Consumer and manufacturing lead the way

Given the large quantities of data it generates, the consumer industry is a robust adopter of Cloud & Virtualization technology. Cloud service providers have responded to this demand with specialized artificial intelligence and machine learning offerings designed to make adoption easy. The consumer market's high score in the "ease of implementation" measure is a result of these efforts. 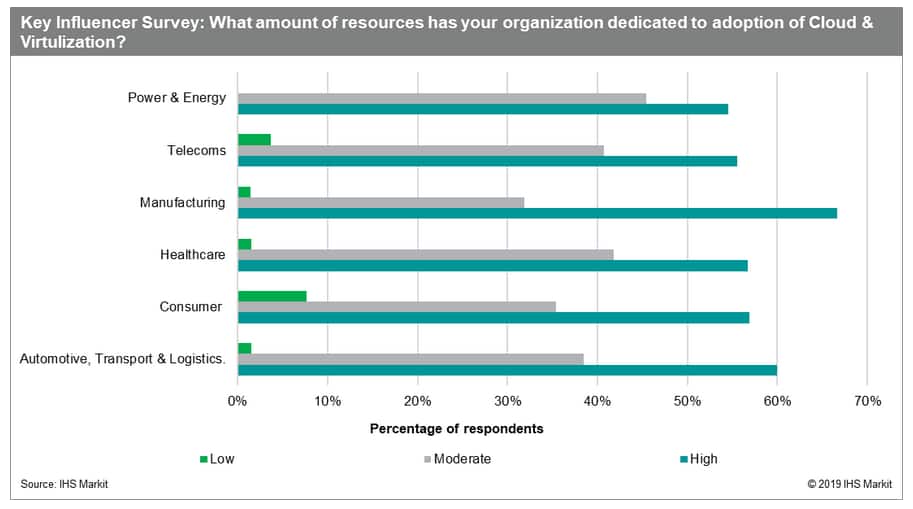 Healthcare and power/energy industries have challenges

Unsurprisingly, the Cloud & Virtualization readiness score in Digital Orbit was low also in the energy and power industry. Energy and power organizations are skilled at operating in-house data centers and have teams of data scientists using traditional models for managing upstream, midstream, and downstream operations. Energy and power entities are also very protective of their data, and only recently have the players in the space started to consider the digital transformation of their businesses. The change of heart can be attributed in part to the soft market conditions for energy, with the price of oil expected to remain flat over the next several years.

Overall, the Cloud is maturing as a technology, and adoption by mainstream buyers is becoming a regular occurrence. Driving the shift is the need within the enterprise space for increased IT performance, cost reduction, and agility.