Closing door or window of opportunity? The prospects for frontier oil and gas producers

The recent spike in prices for crude and natural gas, caused in part by recovery from the pandemic and the repercussions of the Russian invasion of Ukraine, has given frontier and early-stage producers what may be a final opportunity to realize the value of their hydrocarbon resources before the energy transition increases the barriers for entry to all but the most cost-effective or geopolitically advantaged barrels. 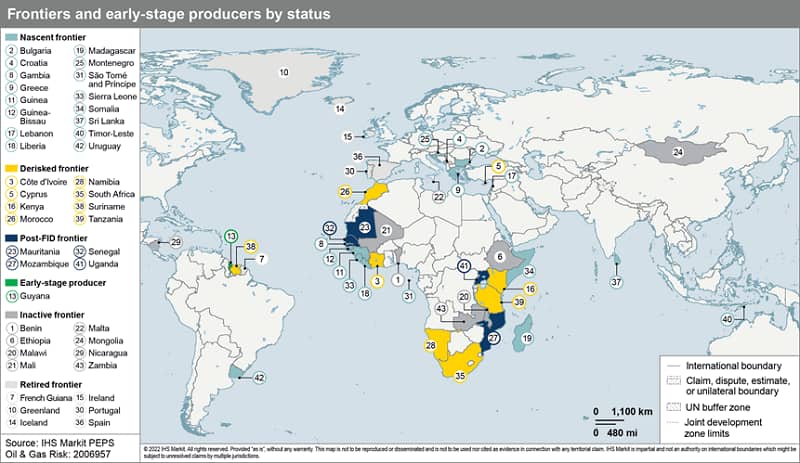 Unsurprisingly, the universe of frontier and early-stage producers has changed dramatically since we last addressed the topic in a major report in 2017. For this analysis, we used an above-ground definition of frontiers, focused on countries or host governments with limited or no production that have been assessed at some point to have important unrealized hydrocarbon upside due to geological prospectivity, technologies that have unlocked new resources, or changes in government policies to encourage investment. The map above highlights the frontiers reviewed, and those that have dropped out of the running since our last update. One country - Guyana - has moved on to become an established producer, and several others have reached FID. Others have failed to launch, either due to political and economic instability, geological failures and/or investor withdrawals, or climate agendas that have closed the E&P sector.

While the ability of frontiers to move from exploration to production has never been straightforward, increasing but still-low exploration investment and a contraction in the number of companies and lending institutions engaged in exploration have dramatically raised the pressure on host governments to attract investors and expedite final investment decisions. Competition between frontier and early-stage producers has become more intense as exploration companies focus on fewer basins in response to budget discipline and a need for rapid and successful results to bring hydrocarbons to market in advance of energy transition.

Understanding the potential facilitators and blockers for what is likely to be the last generation of frontier and early-stage producers - together with an assessment of recent market developments and prospects for energy transition - provides a reasonable indication of the factors that will be critical for frontiers to progress towards production. It is already clear that not all frontier governments will be able to recognize and capitalize on the current situation and the closing window of opportunity to put their hydrocarbons near the top of any list of prospective targets. While favorable above-ground risk cannot compensate for deficiencies in geology, a limited number of frontier and early-stage producers have recognized that the industry is changing and have taken or are taking steps to maximize the attractiveness of and thus their ability to exploit their hydrocarbon resources. 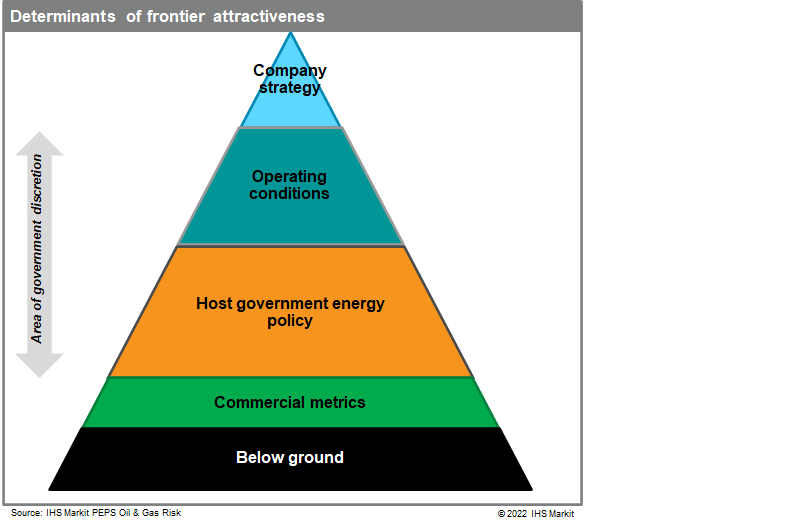 Although access opportunities, fiscal terms, and other factors bearing on entry remain critically important to attracting investment into geologically promising frontier and early-stage producers, the prospect of energy transition has heightened the importance of other factors that can accelerate or frustrate development, including government policy and contract stability, civil society risks, exposure to climate litigation, and prospects for monetization. While many frontier and early-stage producers are decidedly lacking in terms of the infrastructure and policies needed to export or otherwise monetize oil and/or gas, those that have or could add such facilities and policy arrangements both quickly and economically are likely to be especially attractive to today's investors - so too, those with the ability to limit the carbon intensity of development to meet transitional agendas.

Frontiers looking to make the cut in an increasingly constrained market environment will need to offer excellent terms for both Hydrocarbon Sector Entry, to drive initial activity, and Hydrocarbon Sector Development, to provide a clear route to market, whether the focus is export markets or local buyers. To assess the relative attractiveness of our the 28 frontier and early stage producers which are either nascent, de-risked, post-FID or early-stage producers, we used the PEPS Oil & Gas Risk scores for Hydrocarbon Sector Entry (an aggregate of scores for International Openness, Government Take, Expeditiousness of Contract, and State/NOC Role) as well as a new aggregate, Hydrocarbon Sector Development (capturing State Capacity, Regulatory Burden, Civil Society Risk, Export Risk, and Ministerial/Policy Volatility). 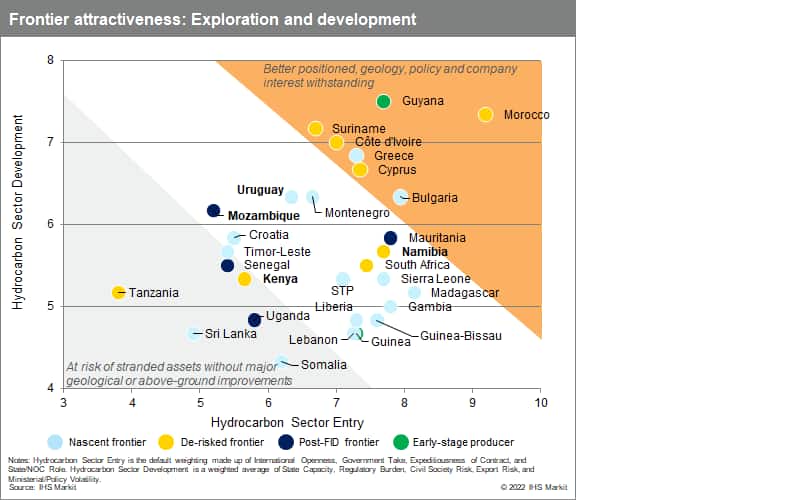 Combining these two critical indicators in the chart above, countries in the orange zone are assessed as offering the most attractive combination of conditions for success as frontier destinations, assuming that factors beyond government control - including company strategies, transition dynamics, and geology - are also conducive. Frontiers in the white middle area still have a chance of moving to production, for example Namibia with its especially promising resources and reasonably good scores, while those that are well into the gray area, like Tanzania and Sri Lanka, may never achieve producer status without significant near-term changes to government policies.

To read the report, Oil & Gas Risk Quarterly: Closing door or window of opportunity? The prospects for frontier oil and gas producers, sign up for complimentary access to the Upstream Demo Hub.