The bid/ask spread is a core indicator of liquidity for assets, but arriving at an accurate and consistent level for a collateralized loan obligation (CLO) can be particularly challenging. Fortunately, two-way dealer markets are relatively common for bonds in this sector, and occasionally multiple dealers quote the same bonds on a given day.

We reviewed over 65,000 dealer two-way markets for pre-2018 vintage USD CLOs originally rated BBB from January 2018 through January 2019, measuring the changes in bid/ask spreads. BBB rated bonds were chosen for the analysis, since mezzanine bonds provide the optimal mix of sensitivity to small changes in CLO market conditions, and also they have an abundance of quotes. The data indicates that only four of the 203 bonds within two-way dealer markets were quoted more than 100 days during the analysis period, none of which were quoted more than 135 trading days. Figure 1 shows the daily count of quoted two-way markets that had bid/ask spreads ranging from 0-20 bps (tightest), 21-50 bps, and over 50 bps (widest) compared to the 2.0 CLO BBB spreads from IHS Markit. The chart shows a simultaneous decline in bonds quoted along with a tighter bid/ask spread, and a sharp increase in the number of bonds in tandem with wider bid/ask spreads in early-February, a period of increased market volatility as well as a significant sell-off in the global equity markets. That trend rapidly reversed later that same month, resulting in a surge of bonds quoted with tighter bid/ask spreads. The surge peaked on March 28 with 22 bonds quoted with a 0-20bp bid/ask spread. Slightly smaller peaks occurred again in late-April and late-June.

The count of bonds with the tightest bid/ask spreads have failed to return back to June's level so far, with only modest frequencies in late-September and mid-October. There was a consistent uptick in bonds with bid/ask spreads greater than 50ps in October, which potentially indicates an increased appetite to trade distressed issues prior to a sharp decline in global equity and credit markets, which began that month. The number of bonds quoted in the tightest cohort of bid/ask spread evaporated from November 27 (around the time when 3.0 BBB spreads began widening) through January 15, when there was at most one two-way market quoted daily within that spread range.

In 2019, the 21-50 bps bid/ask cohort has dominated while there were very few-to-no markets daily in the tightest range. Figure 2 compares the bid side spread of two-way markets versus bid/ask spreads for January through November 2018 and December through January 2019. Intuitively, the higher spread levels from December through the new year should have led to wider two-way markets, but the chart shows that there were a fair number of bonds with equally as wide bid spreads before the November widening that had bid/ask spreads in the tightest cohort. We note that the last few trading days in January did show a slight uptick in bonds quoted at the tightest bid/ask spread cohort, which should be positive for the sector's liquidity if the trend persists.

Measuring the frequency of two-way dealer markets is just one of many potential barometers for measuring CLO liquidity and market sentiment. As with any dealer quote, there is no way to determine which are tradable levels without talking to the market maker, but two-way markets at least have the benefit of a defined spread range versus an open-ended bid or offer. 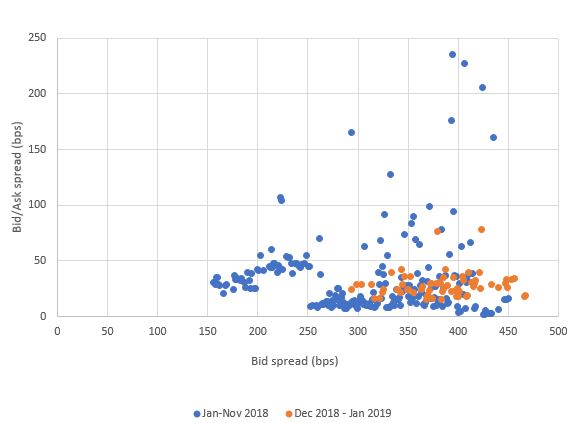