Climate change regulations: coming soon to an industry near you?

Just over 25 years ago, governments around the world began using different policies and regulatory measures to slow the growth of greenhouse gas (GHG) emissions linked to global warming and climate change. Over that period, the focus of climate change policy expanded to include more sectors of the economy and additional forms of energy production and consumption. In 2015, 195 countries signed the Paris Agreement, the most wide-ranging and ambitious deal on climate action yet. As the first deadline of that accord draws near, climate policy programs are expanding to include sectors of the economy previously not targeted for GHG emission reductions.

There are two key trends at work here. First, more governments have made unprecedented commitments by signing the Paris Agreement. Before 2015, approximately 70 countries had climate policies of one sort or another in place. Now, there are more than 160 national policy programs, called intended nationally determined contributions (INDCs), in support of the Paris Agreement (see Figure 1). 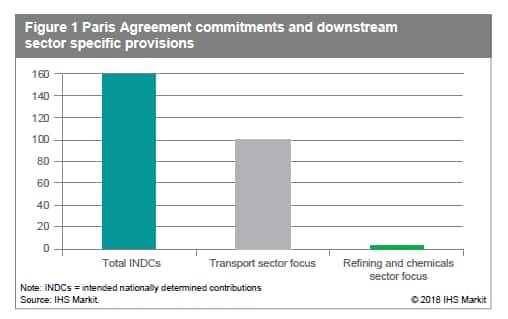 Second, this latest phase of climate policy development is driven by higher levels of ambition. The GHG emissions reduction targets in the Paris Agreement are challenging, to say the least. To realize the goal of only a 2-degree Celsius increase in the global average temperature this century, emissions of carbon dioxide, methane, and other GHG would need to peak by 2020. Then they must decline in absolute terms from close to 50 billion metric tons of carbon dioxide equivalent (CO2e) today to around 30 billion tons of CO2e by 2030. This is a drop of about 40%, depending on the exact pathway assumed. To deliver those outcomes, IHS Markit estimates the global economy would need to improve its emissions intensity by more than 4% each year. Historically, the most effective climate change policy has delivered an average annual emissions intensity improvement of less than 2%.

Setting aside the U.S. for a moment, all major nations that signed onto the Paris Agreement are developing policies to deliver GHG reduction targets. Will all nations meet these targets? Probably not. But, as nations take steps to fulfil their pledges, major shifts in energy markets are expected. Refining and chemicals operators should brace themselves for new types of regulations across their value chains, with plant-level emissions set to become a higher priority.

To date, climate policy has had a more direct impact on the downstream energy industries through on-road fuel efficiency standards, which are directly related to carbon emissions regulation. Some governments, such as those of the European Union, India, and the United States, formulated additional CO2e- or GHG-specific targets for tailpipe emissions of light-duty vehicles. These fuel efficiency standards are the primary policy mechanism that governments use to reduce carbon in their transportation sectors.

Consider the world's two biggest economies, the U.S. and China. In the U.S., the Corporate Average Fuel Economy (CAFE) program was enacted in 1975. The original miles-per-gallon (mpg) target on auto manufacturers became a dual standard that now includes an Environmental Protection Agency (EPA) regulation for CO2e emissions. The 2016 target for light-duty vehicle sales - 250 grams of CO2 per mile (gCO2/mi), equivalent to 34.1 mpg - was changed by the Obama administration to 163 gCO2/mi, an equivalent of 54.5 mpg, in 2025. However, the actual 2017 emissions were estimated to be 275 gCO2/mi - 10% above the 2016 target. The current U.S. administration has proposed relaxing the targets, although the outcome is uncertain at this writing. IHS Markit's base case view is for only a slight reduction in the standard, given automotive manufacturers' model development plans and the lawsuit and discussions regarding California's continued participation in a national standard.

While the U.S. is relaxing emissions standards, China is tightening them further. By adding a new energy vehicle (NEV) standard, China is essentially mandating that an increasing portion of new auto sales will be electric vehicles (EVs). In fact, about half of global 2017 EV sales were in China. The NEV is a dual standard applied alongside an already stringent corporate average fuel consumption (CAFC) standard. China's CAFC improves fuel economy from about 34 mpg in 2015 to 47 mpg in 2020 and over 58 mpg (proposed) in 2025.

How do regulations affect other sectors beyond light-duty cars?

Japan was the first to adopt a heavy-duty vehicle fuel efficiency standard, followed by the U.S., China, and the European Union. More nations are expected to follow their lead, given the increasing road transport demand and benefits of technology advances in truck powertrains and transport supply chains.

Policymakers are also looking to the sea-borne shipping and aviation sectors to contribute to emissions reduction efforts, but these changes may affect the refining and chemicals businesses. In response, those industries have taken it upon themselves to organize collective responses befitting their international character. Most of these responses emphasize the need to give operators the chance to contribute to lower emissions outcomes in a flexible manner that keeps costs down.

So, what is the future of refining in a world of flat or declining demand?

Virtually all projections that measure progress toward the objectives of the Paris Agreement include an eventual contraction of oil demand. Even an energy transition that does not completely align with a 2-degree emissions pathway will mark a departure for many downstream businesses, whose strategies have been predicated upon growth. Lower demand growth will certainly mean a weaker business environment for refineries. But, the reality might not be as dire as it first appears. It is true that fewer refining projects will be needed to process crude oil into product. And, yes, once peak demand is reached, total crude runs will decrease and asset rationalization will take place.

However, rationalization in the refining industry has been occurring for a long time. The industry has shuttered nearly 1 million barrels per day (B/D) per year of refining capacity in mature markets over the past decade. During this time, the industry has also added about 2 million B/D of new capacity, mostly in growing markets. IHS Markit expects this same expansion in growing markets and decline in contracting markets will continue for many years, even as the global total demand begins to shrink.

What will change at the plant level?

Plant-level process emissions have been less important to the achievement of environmental goals, at least to date. Asset owners have been required to make moderate adjustments and trade-offs in plant designs to stay compliant on new projects. However, in the few countries where policies have been put in place to reduce refinery plant-level emissions, like the European Union Emissions Trading System, markets are not yet being impacted significantly in either margin or price.

Nor are petrochemical producers being strongly influenced by plant-level or supply chain emission requirements. In fact, conversations about environmental outcomes in the petrochemical industries have focused on the sustainability of plastics and the opportunities to recycle petrochemical products (see prior article). As petrochemical operations expand to meet growing end-use demand, and as the oil product slate shifts further towards petrochemical feedstocks, social and regulatory scrutiny of industry GHG emissions from both products and plants is likely to increase.

Most governments focused somewhat on the transport sector in the initial policy outlines created to deliver on their Paris pledges. But petrochemical and refining has not been called out by many administrations. IHS Markit expects this situation to change as governments increasingly grasp the need for GHG cuts across all large emitting sectors. Striking the right balance between such national environmental goals and the competitiveness of global refining and chemicals businesses will be important.

Climate policy is expected to target additional emissions reductions from refining and chemicals operations. The focus to date has been on products and fuels, and that is likely to intensify. At the same time, plant-level emissions will come under greater pressure as governments seek to hit ever-more-ambitious targets. As companies make critical investment and business decisions - which often have multi-decade payouts and are based on international trade - it is important that they have an integrated view of the climate policy, energy, and petrochemical landscape.