Low carbon power accounted for 30% of the $1.5 trillion capex spending in the energy sector supply-side [1] in 2021, up from 22% in 2015. Transmission and distribution accounted for the largest individual share at 23%, spending in upstream and non-hydro renewables was roughly equivalent at 22% each. Utility-scale solar PV and smaller, distributed PV systems made up together a third of low carbon power spending. Onshore- and offshore wind accounted to 20% and 14%, respectively, the latter benefitting from an unprecedented installation rush in Mainland China.

Cumulative spending in low carbon power during the rest of the decade is expected to exceed $4.4 trillion [2] and reach $530 billion per year in 2030. Spending increases are most spectacular for hydrogen generation, increasing from a very low base to nearly US$70bn per year towards the end of the decade. Battery spending also continues to grow fast, at around 10% per year.

Spending increases are greater in the Africa and Middle East region, starting from a low base. Low carbon spending in North America stagnates after a burst in the next few years, as the anticipated phase-out of local tax incentives takes a toll on renewable capacity additions. The share of low carbon in total energy spending increases everywhere except in Asia Pacific where it remains roughly constant at 35%, and the Americas where it drops slightly from 23% to 19%.

Because of falling cost, the amount of capacity installed for each dollar spent in low carbon technology increases faster than for any other segment. Overall capital investment efficiency for low carbon power technologies improves by 30% by 2030. Capital expenditure per unit of capacity of green hydrogen production drop the fastest as benefits from scaling up electrolyzer unit capacity materialize, making a dollar spent at the end of the decade 2.7 times more efficient than in 2021. Generation efficiency for renewable power will also improve by 23% while efficiency gains will be much lower for conventional energy sources as costs could even increase due to more stringent environmental constraints.

There is a significant upside to these numbers, due to several recent developments. First and foremost, Russia's invasion of Ukraine has brought the geopolitical dimension of energy into sharp focus, with energy independence becoming a key topic, particularly in Europe. This is likely to boost spending in all segments of the energy sector as the region tries to reduce its energy-related imports. Doubling renewables additions in Europe from our current outlook could add between $390-$580 billion in spending, depending on timing and the technology mix. Higher-than-anticipated government driven capacity increases from Europe as well as Asia could put additional pressure on already tight supply chains, contributing to upwards pressures on higher prices and consequently higher per MW spending in the near-term.

Annual spending levels in low carbon would need to be twice as high in 2030 as they are in our current projections to meet more ambitious climate objectives. Current spending projections are not sufficient to fund a capacity build-out that would put the energy sector onto a path to reach net zero. Annual spending in low carbon power technologies would need to increase sharply, and reach around $1tr in 2030, with renewables accounting for $770-930 billion annually depending on the scenario [3]. 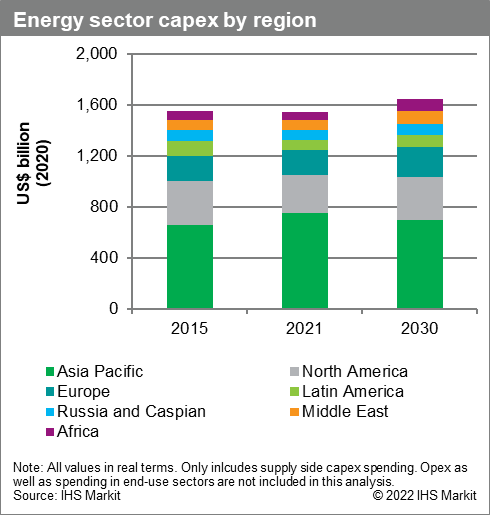 [1] Including upstream oil and gas, mid- and downstream, coal mining, fossil fuel power generation and transmission and distribution infrastructure, and low carbon power. Low carbon power includes non-hydro renewables, batteries, green hydrogen production, hydropower and nuclear, and carbon capture utilization and storage (CCUS). This analysis does not include investment spending on the demand side of the energy system, such as on transport vehicles and networks, the buildings sector, or nonenergy industry.

[3] Based on the IHS Markit MultiTech Mitigation (MMM) and Accelerated Carbon Capture and Storage (ACCS) scenarios.

For more detail on the trends dominating the clean energy technology segments in 2022, download the 10 Cleantech Trends in 2022 whitepaper.