Civil war in Ethiopia: latest news and implications for the upstream sector

In early November 2021, it was reported that troops from the Tigrayan People's Liberation Front (TPLF), in alliance with other forces and rebel groups, were rapidly advancing south to seize Addis Ababa, the Ethiopian capital. Prime Minister Abiy Ahmed immediately declared a six-month state of emergency across the whole country and asked citizens to prepare for the fight. Worried about an imminent attack, the U.S. (and other countries) requested its residents to leave the capital and urged TPLF to stop their advance. The U.S. also announced a freeze of the duty-free access for Ethiopian goods agreed in the African Growth and Opportunity Act.

As of 9 November, rebels aligned with the TPLF, such as the Oromo Liberation Army (OLA), were reportedly advancing towards the capital, but news about when the troops could arrive is confusing due to communications having been cut off. On 5 November, nine anti-government groups, including TPLF and OLA, signed for the United Front of Ethiopian Federalist and Confederalist Forces alliance "to command and coordinate military and political efforts to solve the conflict".

The conflict started one year ago when in November 2020, PM Ahmed launched a military operation against the TPLF, following a federal army base attack. The TPLF had before organized regional elections in September 2020 without the national office's consent, which led to the re-emergence of previous tensions between the two parties. The military operation consisted of capturing the Tigray region, northern Ethiopia, and its capital Mekele, with the assistance of Eritrean and Ethiopian paramilitary troops.

Implications for the upstream sector

In a video published at the Africa Oil Week (AOW) 2021 webpage, the State Minister for Mines and Petroleum, Dr Koang Tutlam Dung, presented a promotional campaign for Ethiopian E&P opportunities and the upcoming update of the Petroleum Code to attract investors. An overview of the potential of the blocks was given, with a focus on areas close to the 8 Tscf of gas discoveries to be developed by the Chinese Poly CGL group in the Ogaden sub-basin. However, he did not mention the current above-ground risk of investing in Ethiopia, with the ongoing civil war and the security issues it might carry. While confirmed to be present at the Dubai AOW in early November, the Ethiopian delegation eventually could not travel due to the conflict.

Current companies with assets in Ethiopia are not making significant progress in their respective projects. The British company New Age (African Global Energy) Ltd has postponed its planned seismic studies to 2022 and is selling up to 50% interest to develop the El Kuran oil field in the Somali Basin. It is unlikely that New Age will find a partner in a short period, considering the civil war.

The GPB Global Resources B.V. company has not even listed the Afar asset among its planned projects on its website. This is a deeply unexplored area, with no wells drilled and far from the gas prolific Ogaden discoveries.

The Chinese Poly CGL has been the most active company in recent years, with large volumes of gas pending to be developed at the Calub, Hilala and Dohar fields in the Ogaden sub-basin. The holding planned to build a pipeline and LNG complex in Djibouti to export the gas (3 MMtons/year) to China. In November 2020, Poly CGL reported that an external evaluation of the project was in progress, but no announcement has been released on the state of operations since then. Surprisingly, in the video mentioned above, Dr Solomon Kassa, Director of Petroleum Exploration and Development Operations Licensing Directorate, said that the Ministry is looking for companies to construct the pipeline and the LNG complex. It is unknown if the Chinese group has withdrawn from the project or is also looking for constructors, but given the civil war, it is improbable that this massive infrastructure will become a reality in the upcoming years. 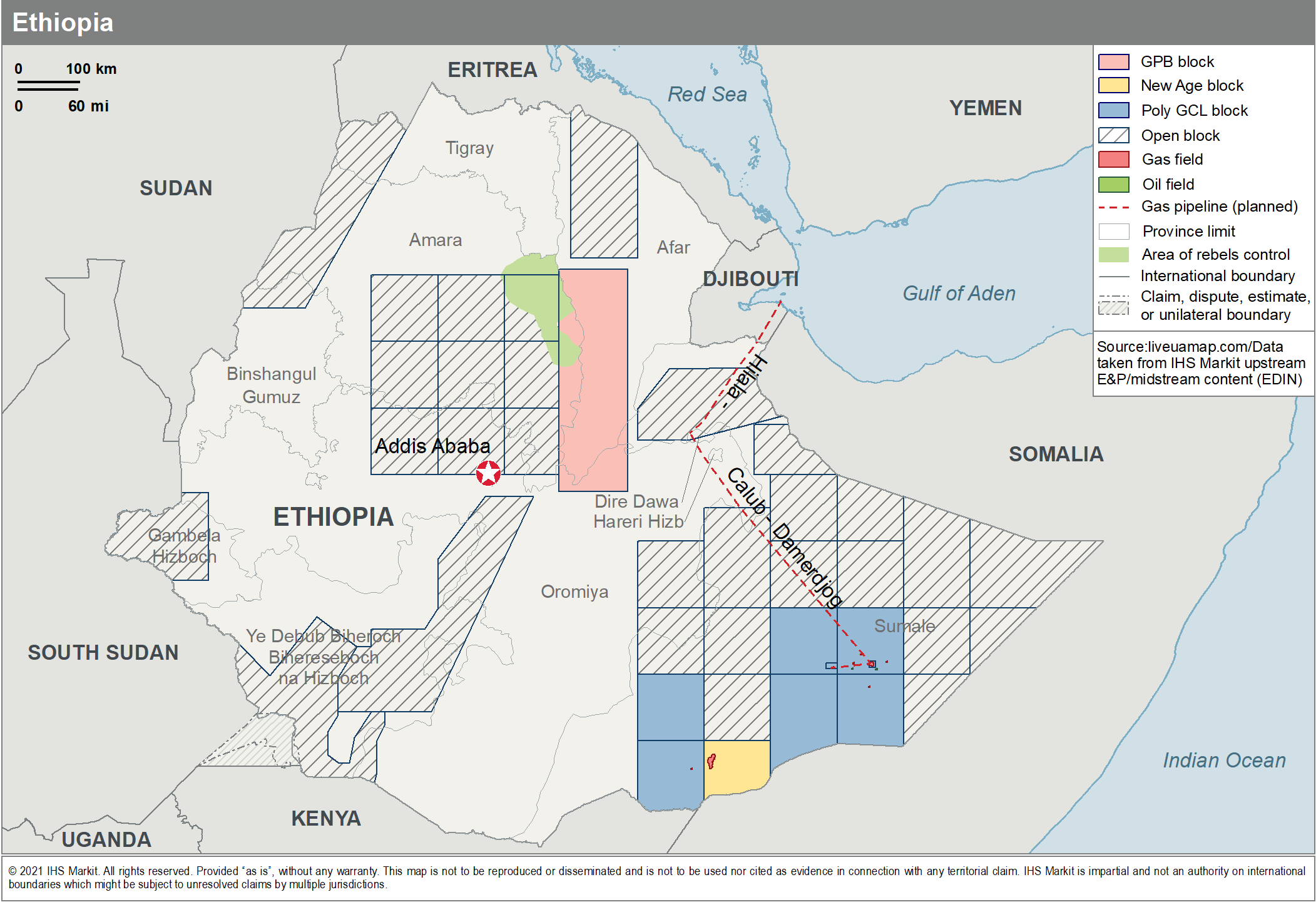 Learn more about detailed E&P activity coverage and context by country/territory.
View more about our detailed data and summaries on wells, fields and basins.
Learn about our asset evaluation, portfolio view, and production forecasts.

Cristina Tomé Martinez is an associate director of technical research for IHS Markit.