A recent study by the University of Cambridge stated 2019 saw the "highest level of democratic discontent on record". Dissatisfaction with democracy in developed countries had increased from a third to half of all citizens over the last 25 years. The last two years have also seen several large-scale and disruptive protests - including in the special administrative region of Hong Kong; Santiago, Chile; political violence in the US, Thailand, Belarus, India, and now in Myanmar; anti-corruption protests in Lebanon; anti-racism protests around the world; anti-lockdown protests in several countries. Broad trends in political sentiment, it seems, are linked to concrete threats to personnel and assets.

Here we look at correlations between measures of political dissatisfaction and our country-level protests & riots scores. Our protest & riots score is well-correlated with several widely respected survey measures on social themes that have a bearing on long-term, strategic security concerns. Frustrations with political institutions and dissatisfaction with the depth of democratic governance, for example, are correlated with high risks of civil unrest. Such high-level correlations are unsurprising and of course cannot capture the complexity of local dynamics that drive civil unrest. But five country-level examples below show how these correlations can indicate which assets and personnel are at risk during periods of unrest - extrapolating from strategic to tactical.

Our Economics & Country Risk scores measure the risk of protests and riots over a 12-month time horizon. The scores are based on granular local dynamics assessed by our country risk experts. We combined these risk scores with survey data from the World Value Survey (WVS) about satisfaction with the political system and other indicators that measure civil liberties (Freedom House) and the rule of law (World Justice Project). The WVS is based on 72,879 representative respondents from 50 countries interviewed between 2017 and 2020. To evaluate respondents' assessment of democratic governance in their country we use the following WVS question: "How democratically is this country being governed today?" (answered on a scale from 1 to 10). Interestingly, this subjective assessment of respondents is not correlated with objective measures of democracy from the PolityProject or Freedom House. WVS respondents in Tajikistan, China and Vietnam, for example, provide high average ratings for democratic governance in their countries but the Polity V rating on institutionalized democracy for those countries is extremely low. There are several plausible reasons for this, including respondents interpretation of key terms like 'democratically', relative improvement in governance in the years preceding the survey, and in some cases tacit coercion when answering. Overall, we assume respondents' answers are an acceptable proxy for overall 'satisfaction' with the political system under which they live.

We find that the protests and riots risk rating is highly correlated with the rule of law index (-0.7), the respondents' perception of democratic governance in their country (-0.5) and the respondents' satisfaction with the political system performance (-0.4). 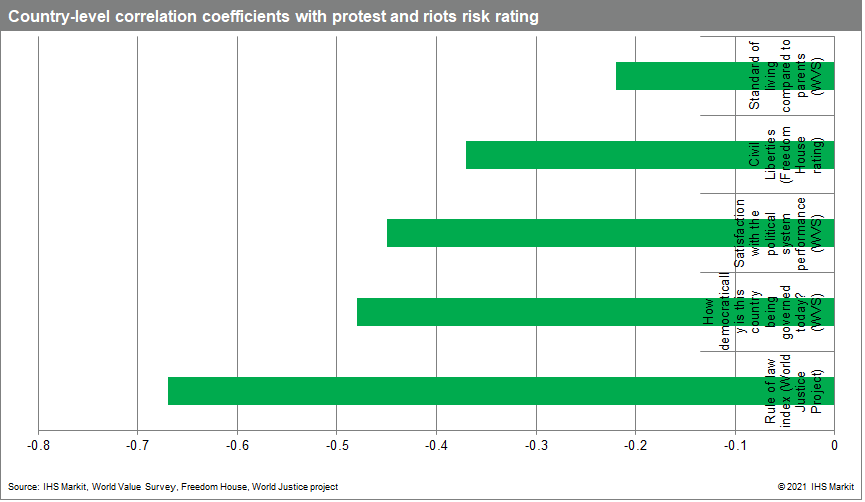 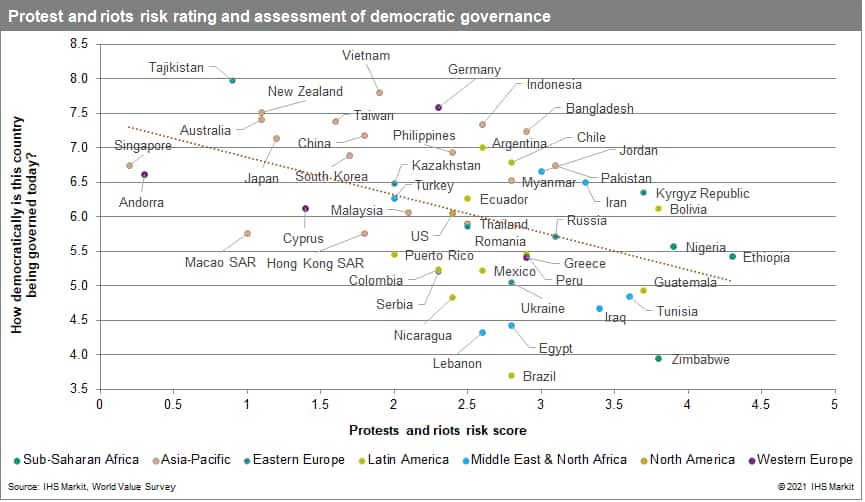 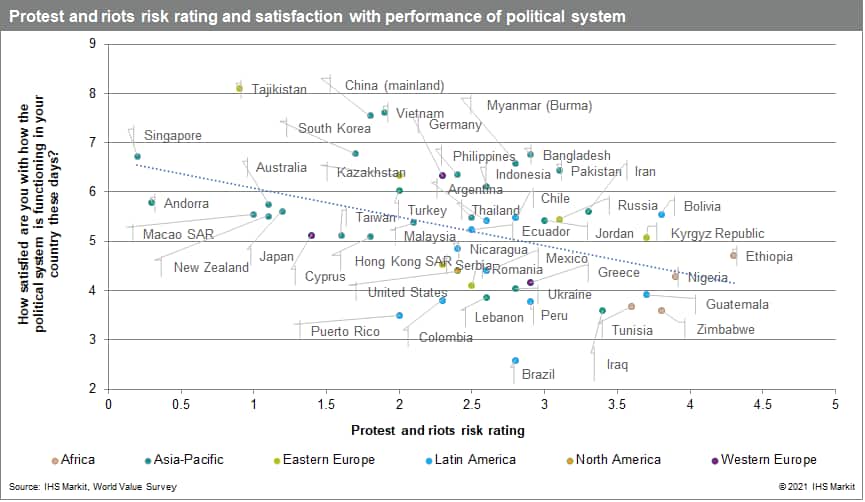 In countries where respondents are highly satisfied with the performance of their political system the protests and riots risk rating is lowest. High levels of dissatifcation as for example in Brazil, Iraq or Zimbabwe are correlated with a high risk or protests and riots over the next 12 months. Satisfaction with the political system is highest in Asia and Europe while respondens in Latin America, the Middle East and Africa are more critical.

The correlations above are often - but not always - reflected at a country-level and survey data can indicate in concrete terms the assets and personnel at risk during periods of civil unrest. Five examples from around the world show this:

Civil unrest in the coming years will be driven by a range of issues, including livelihood grievances if governments struggle to steer their economies towards post-pandemic recovery. Understanding the nuances of those drivers will indicate which assets and personnel will be at risk.