Chinese Premier’s 2021 State of Nation Report: Emphasis on getting to peak carbon emissions before 2030

On 5 March 2020, Chinese Premier Li Keqiang delivered his annual "State of the Nation" address, formally known as the Government Work Report ("the Report") to the National People's Congress, which commenced its annual legislative sessions last week.

The Report released key policy targets for 2021 and disclosed policy directions for the 14th Five-Year Plan (FYP) that spans the 2021-25 period. IHS Markit believes that the latest pronouncements underlined policymakers' intention to balance the need of supporting economic growth during a global pandemic and China's recently announced climate ambitions.

The Report announced that China's energy intensity (energy consumption per unit of GDP) and carbon intensity (carbon emissions per unit of GDP) will decline by 13.5% and 18%, respectively, during 2021-25. These two targets were considered "binding targets" during the last FYP and we expect them to remain so in the new one.

The new energy intensity and carbon intensity targets are generally aligned with those in the 13th FYP, which were 15% and 18% reductions, respectively. This reflected the government's continued focus on delivering economic restructuring, energy efficiency, and clean energy results. 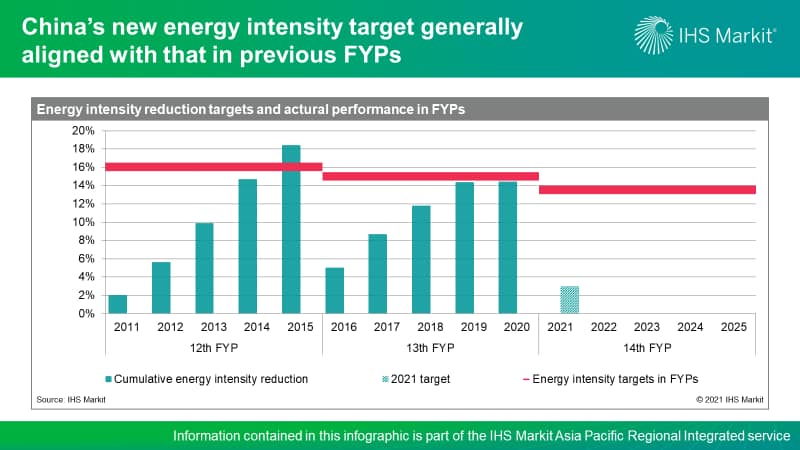 China has had a peak carbon target for 2030 since it is officially included in its Nationally Determined Commitment in the Paris climate agreement. This target was highlighted again in President Xi Jiping's address to the United Nations last September, during which he committed China to carbon neutrality by 2060. Furthermore, President Xi strengthened the 2030 target by setting the peak carbon emissions before 2030 instead of by 2030.

It is therefore not a surprise that this year's Work Report by the premier called for the formulation of specific plans to achieve peak carbon emissions before 2030. We expect this to become an immediate key task for all levels of government agencies and state-owned enterprises across the country, with major implications for sector- and company-specific FYPs, which are to be released in the months ahead.

The Report also stipulated plans for "clean and efficient use of coal" during 2021-25, which indicates that the government is still willing to see coal consumption increase in the next five years—a potentially controversial point given that coal accounts for nearly 80% of total energy-related carbon emissions in China.

But it is unlikely that the government will put a binding target on peak coal consumption by 2025, as coal remains a key contributor for the supply security and reliability against a backdrop of continued energy demand growth.

Aside from continued focus on clean energy development, what was notable in the Report was its emphasis on steady growth of nuclear power. In both areas, China is currently the largest market in the world, with the government intending for it to be a technology leader in low-carbon energy in the long term.

China's power sector currently has two parallel pricing mechanisms, i.e. traded price in a quasi-competitive wholesale market as well as the regulated on-grid tariff and retail tariff that control price levels. The Report demonstrates the policymakers' intentions to push for lower energy costs as the economy recovers from a global recession.

Specifically, the Premier emphasized the need to deliver further power tariff reductions for commercial and industrial power users, which is a continued trend from the previous three years. Those efforts have overall led power prices to drop more than 20% by end-2020, for example.

Meanwhile, the Report pushed for continued energy market reforms, which the government believes would lead to lower energy prices for the economy, although that may not be a guaranteed outcome from deregulation.

The 14th FYP priority: Setting the stage for peak carbon emissions before 2030

In our view, the Premier's Work Report largely reaffirmed China's current policy directions, but with an added emphasis on climate change. As is the case in recent FYPs, both economic growth and green commitment will be key considerations for national plans. To meet the peak carbon emissions and carbon neutrality targets, China must accelerate its economic and energy transformation.

We believe that the priorities for the 14th FYP will be anchored on the target of peak carbon emissions before 2030.