Chinese enterprises reported further growth in economic activity in May, according to the latest Caixin PMI™ surveys, although the rate of expansion slowed to a three-month low on the back of softer domestic demand. Business expectations for the year ahead meanwhile sank to the lowest in the series history, broadly reflecting rising concerns over the impact of US-China trade tensions.

With survey data also indicating a lack of accumulation in backlogs of work midway through the second quarter, owing to only a marginal gain in new work, the coming months will likely see business activity remain relatively subdued. There is also an increasing risk that an intensifying trade war will weigh further on client demand. 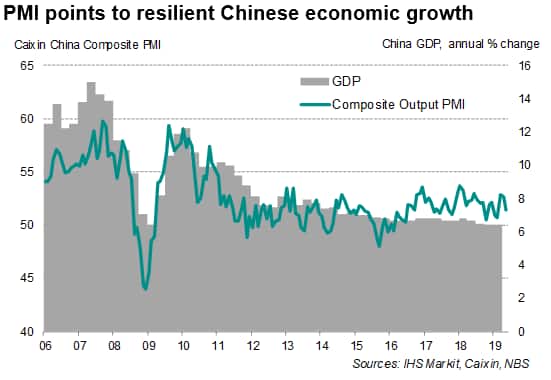 The Caixin PMI survey's composite output index slipped to a three-month low, from 52.7 in April to 51.5 in May. Growth was led by an increase in services business activity, albeit with the rate of expansion easing, while manufacturing output was largely unchanged. Even though the average PMI (52.1) so far in the second quarter is above that of the previous two quarters, other PMI sub-indices failed to provide evidence that this pace of growth could be sustained in the months ahead, especially when exposed to a possible deterioration in global trade conditions.

Order book growth moderated to the slowest for three months, which contributed to a stagnant level of work-in-hand, suggesting that any future expansions of output could be subdued. 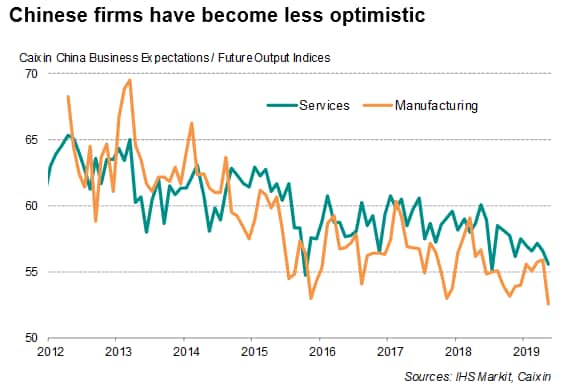 The dip in business expectations surrounding output in the year ahead represented a particular cause for concern. While still indicating positive sentiment, as optimists exceeded pessimists, the Future Output Index fell to its lowest since data on this indicator were first available just over seven years ago. According to anecdotal evidence, an expectation that US-China trade frictions could reduce output and sales was an especially common concern.

While Caixin manufacturing PMI data continued to indicate signs of stabilisation in China's manufacturing economy, with the headline index remaining above the neutral 50.0 level for a third month running in May, manufacturing conditions remain vulnerable to a rapid escalation of trade tensions. This was highlighted by subdued growth in new orders and the lowest level of business confidence recorded among Chinese manufacturers in the series history.

Detailed data by types of manufactured product add to concerns about the health of the manufacturing sector. While orders for consumer goods continued to hold up reasonably well, sales of investment products (such as equipment and machinery) fell further in May. Demand for intermediate goods (semi-finished goods used as inputs in the production of other goods) was meanwhile stagnant.

The fear is whether the headwinds facing the manufacturing sector will spread over to services. May saw softer growth in services activity, and at a pace below the series average, in part due to many service providers being reliant on a healthy goods-producing sector (transportation being the most obvious service sector whose performance is highly correlated with manufacturing). Backlogs in the service sector also continued to decline in May.

The general expectation is that any further deterioration in growth prospects will push the Chinese authorities towards considering more fiscal measures to support growth.