Under the Paris agreement, countries are expected to make their climate commitments more aggressive overtime during subsequent years. For China, most of the updated 2030 targets represent an incremental tightening from those stated five years ago in Paris, especially compared with Xi's 2060 carbon neutrality pledge made in September.

China started to include carbon emissions per unit of GDP, or carbon emission intensity targets, in five-year plans (FYPs) from 2011, after joining the Copenhagen Climate Change Agreement at the end of 2009. During the past decade, China has reduced carbon intensity by more than 35% and met its 2020 target of 40-45% reduction from the 2005 level ahead of time.

The new 2030 commitment is nearly a reiteration from the target set in 2015, except that the previous upper bound of 65% becomes a minimum requirement in the new target. Going forward, we believe the economic restructuring—from heavy industry to light industry and services—as well as energy efficiency gains and energy mix change towards low carbon technologies will continue underpinning the carbon intensity reduction.

In addition, carbon price could potentially become a powerful policy tool during the next decade to support climate efforts. The Ministry of Ecology and Environment recently issued policies on the regulatory framework for national emission trading scheme (ETS), indicating good progress in the national carbon market buildup after nearly 3 years of stagnation.

In contrary to the carbon intensity goal, the new 2030 target of non-fossil share in primary energy consumption exhibited a bigger change, from the previous target of 20% to now 25%.

During the past decade, non-fossil fuel share increased by 3-4% every five years, now standing at roughly 15%. This means that China needs to increase non-fossil share by about 10% over the next decade.

This represents a faster pace than in the previous decade, but not drastically different. As a matter of fact, if China maintains this same pace until 2060, non-fossil fuel share will only reach 55%, far from what carbon neutrality requires.

One element that stood out is the fact that for the first time specific renewables installed capacity target is included in the climate goals. But the wind and the solar target is not overly aggressive, either. In the latest IHS Markit outlook (issued before 2060 carbon neutrality pledge was announced), China is expected to add more than 70 GW wind and solar capacity each year during the next decade and build up a renewables fleet of over 1,200 GW by 2030, in line with the new NDC.

The increasing penetration of renewables will be accompanied by a reduction of coal-fired power capacity, as well as the growth of hydro, nuclear and battery storage to maintain the capacity adequacy and reliability of power supply.

Overall, the new 2030 NDCs reaffirmed China's commitment to the Paris climate agreement. In fact, they go beyond the goal of peaking carbon emission before 2030 and signal a progressively accelerated transformation pace urged by 2060 carbon-neutral goal. Short-to-medium term policies will remain focused on aligning efforts and gathering momentum before China accelerates the energy transition more aggressively towards a net-zero carbon future in the long run. 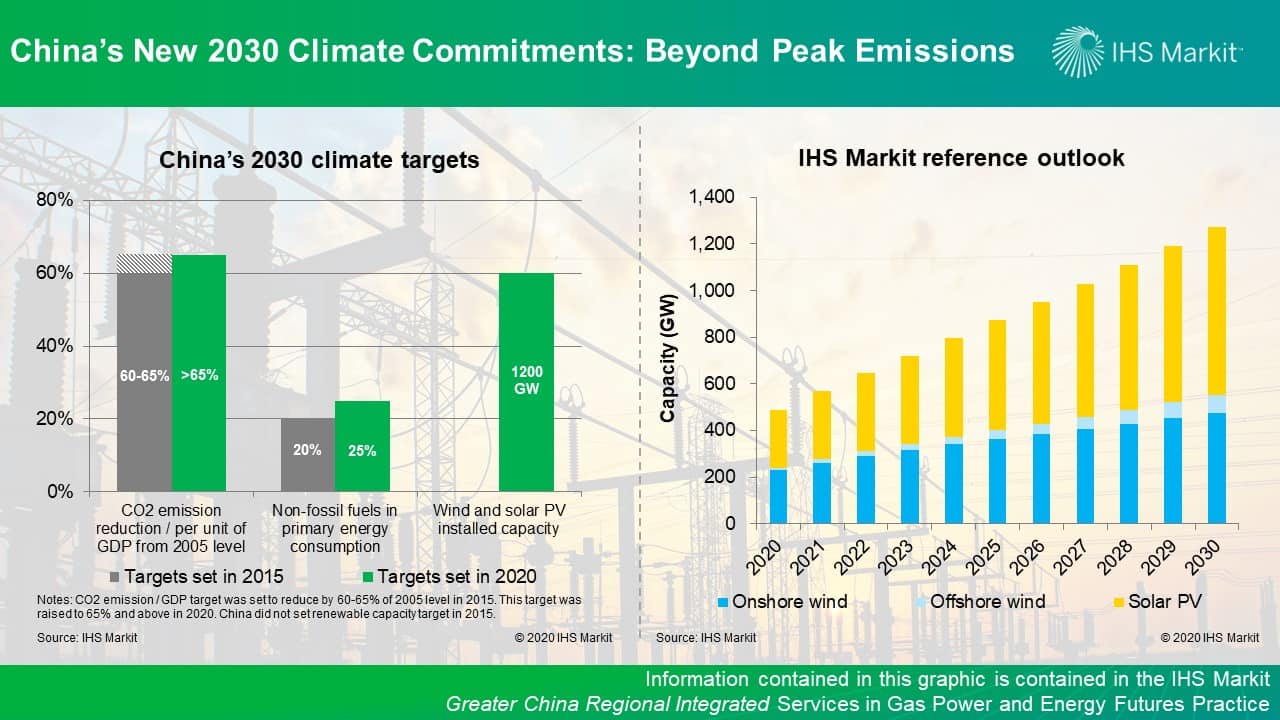 Learn more about our coverage of the Greater China energy market through our Asia Pacific Regional Integrated service.

Bing Han is a senior research analyst on the Gas, Power and Energy Futures team at IHS Markit.

Lara Dong is a senior director on the Gas, Power, and Energy Futures team at IHS Markit.

Sea Cargo Charter's 1st annual report is out - what does this mean for #shipping? Read more in our #netzero article… https://t.co/qjBmWLE3po