Regarding demand, Northeast Asia is also a large styrene consumer and represents 55% of the global consumption. This can be attributed to the booming Chinese market over the last several decades. In 2019, China is expected to account for 34% of styrene consumption in Northeast Asia, compared to South Korea, Taiwan, Japan and Southeast Asia which consume far smaller volumes. 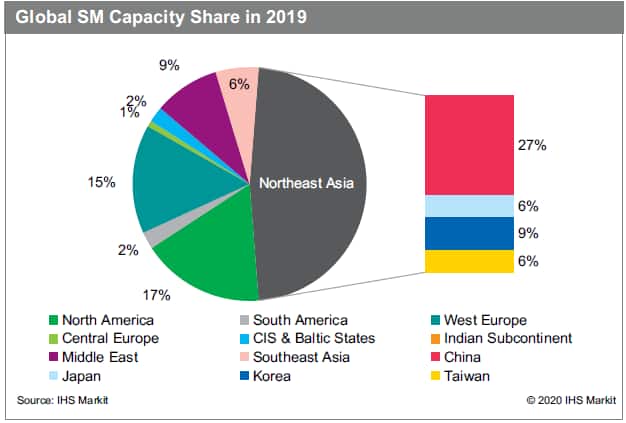 Chinese styrene imports were 3.2 million metric tons in 2019, accounting for about 40% of total global styrene imports. With new capacities being commissioned in China, the self-sufficiency rate has consistently increased. By the end of 2019, net imports of SM slipped by 13% compared to five years ago. Meanwhile, the nameplate capacity in China has increased by 28% in the last five years, rising to 9.3 million metric tons. On the other hand, Chinese styrene self- sufficiency has persistently increased and was pegged at 71% by 2019, up from merely 58% five years ago. Looking forward, in line with ongoing capacity additions in China, self-sufficiency is forecast to continuously grow and reach 80% by 2020. Thus, Chinese domestic production will become an ever more critical factor for global styrene market dynamics. 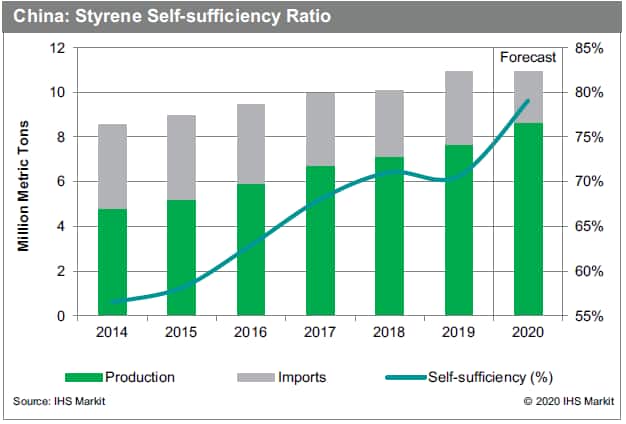 A large proportion of China's capacity is non-integrated. 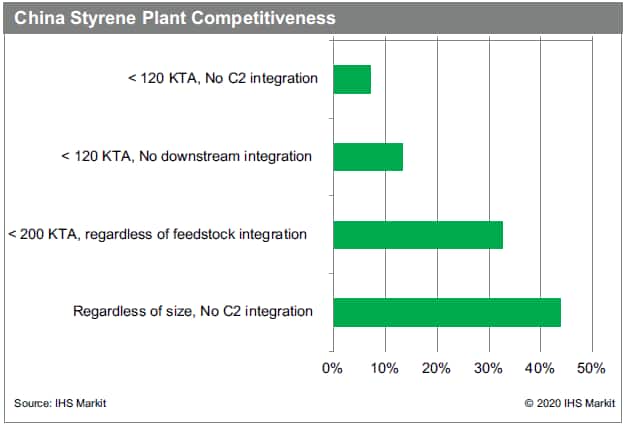 Meanwhile, the percentage of non-integrated producers is much higher than in other regions. They need to purchase benzene and ethylene from merchant markets, which has been one of the main factors restricting the Chinese styrene operating rate historically.

Among Asian styrene producers, some Chinese facilities can be more competitive on a cash cost basis as they benefit from lower costs, including labor rates and logistics. Non-integrated styrene producers operated at a higher rate than in other regions, supported by competitive domestic feedstock prices and higher domestic prompt styrene prices in 2019. However, given the fact that many new large-scale styrene plants will soon start up, as described below, styrene margins are expected to get dramatically squeezed.

Intensive start-up of new, large capacities will impact market dynamics.
During the last five years, the majority of Asia's styrene capacity additions occurred only in China. For the next five years, of the officially confirmed projects, most are still located in China, despite the possibility of expansions as well in other countries.

It will take time for the new large-scale styrene plants to realize their production. Significant volatility in the styrene margin is expected to take place before the operation of these new capacities stabilizes. Meanwhile, a new wave of styrene derivatives capacity is expected to gradually come on-stream beyond 2021. Before that happens, the margin of styrene derivatives may be favorable, which should support domestic consumption. 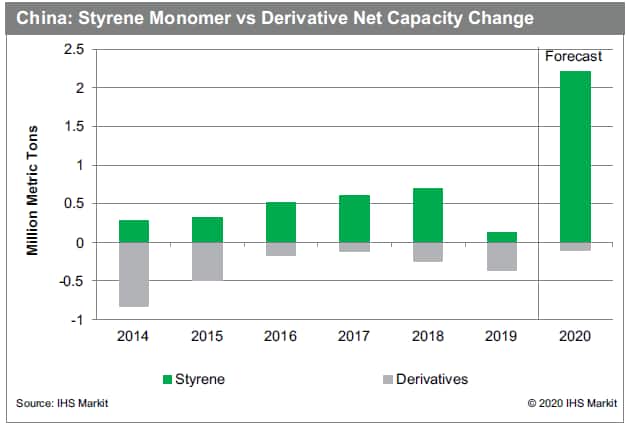 Regional trade flows have changed.
The impact of China's antidumping duty (ADD) on styrene against producers in Taiwan, South Korea, and the United States, starting from 23 June in 2018, has clearly resulted in a re-routing of trade flows. The investigation claimed that from 2013 through 2016, producers from these named markets exported styrene to China at prices below that of their domestic markets, and consequently harmed Chinese domestic producers. The investigation was completed in June 2018, with specific duties imposed on producers in these three named markets. US producers were hit the most while the ADD duties on Taiwan and South Korea producers were lower, though still punitive, at 3.8-4.2% for Taiwanese producers and 6.2-7.5% for South Korean producers. The claim was largely requested by non-integrated, less economically efficient Chinese producers, who were concerned with the extremely competitive outlook of the styrene industry.

China will become more self-sufficient with the ongoing new capacity expansions. However, the country is expected to retain a large quantity of styrene imports in the forecast period. Trade flows have begun to change with more volume coming from the Middle East into China. US producers began to increase exports to Western Europe, Turkey, the Indian Subcontinent, South Korea and Taiwan. With new world-scale projects coming onstream in 2020, China's non-integrated producers could face a much more challenging environment competing for a foothold.