By end-2020, wind, solar PV and biomass installed capacity reached 281 GW, 253 GW and 29.5 GW, growing by 25.3%, 19.0% and 22.6%, respectively. Wind and solar PV new additions reached 71 GW and 48 GW in 2020, despite the negative impact of COVID-19. In 2021, IHS Markit expects total renewables and non-hydro additions to be above 110 GW and 90 GW, respectively. The incremental pace in RPS target setting is also maintained in 2021. Therefore, we expect that the provinces will continue to achieve RPS targets in 2021 without encountering insurmountable challenges. 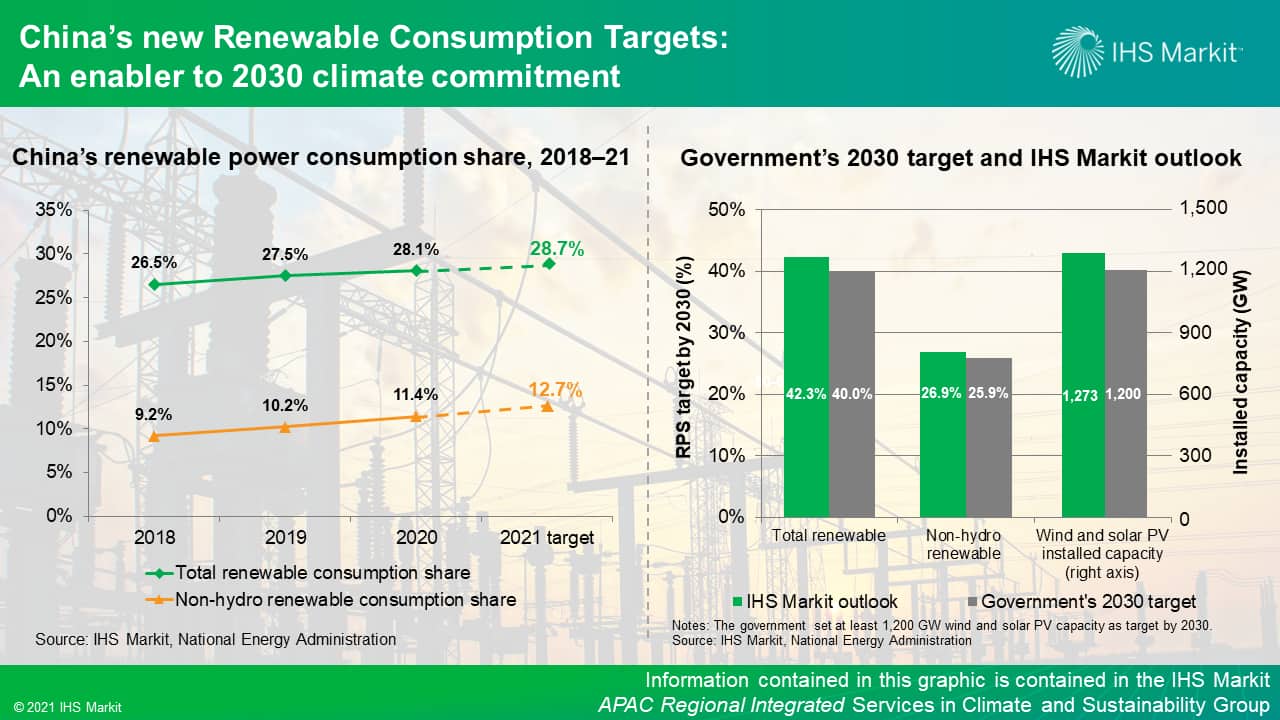 2030 RPS targets are also within reach

In the latest IHS Markit outlook (issued before 2060 carbon neutrality pledge was announced), China will add above 90 GW of wind and solar PV capacity each year during the next decade. Installed capacity of wind and solar will exceeds 1,200 GW by 2030, well aligned with China's 2030 NDC, which is also the basis for the 2030 RPS target setting.

Increasing penetration of wind and solar PV will be accompanied by peaking coal-fired power generation at 2026-27, as well as the growth of hydro, nuclear and battery capacity. By 2030, IHS Markit expects the renewable and non-hydro renewable power consumption to take shares of 42.3% and 26.9%, respectively, compared with RPS targets of 40% and 25.9%.

China's renewable policy has gone through a number of phases starting with a decade of direct subsidy to renewable auction from 2019, then grid parity from 2021. Shifting away from subsidy mechanism that focuses on capacity buildout, China relies on RPS to mandate renewable consumption, which is pivotal for China's energy transition strategy and climate commitment.

RPS mechanism will entail the optimization of renewable capacity additions and penetration process. The entities who are obliged to meet the RPS targets­—including local governments, power generators, grid companies and power users—will have to work closely to fulfill the local targets. Along the collaboration process, we expect to see simplified project approval procedures, improved access to low-interest financing, more diversified tax benefits, and accelerated grid connection.

Moreover, RPS mechanism will facilitate the market-oriented power sector reform. In addition to direct trading of renewable consumption volume, Green Certificate (GC) purchasing is also recognized as an alternative solution for target fulfillment. The RPS-plus-GC mechanism will give rise to sustained demand for GC market and materially improve the liquidity.