My last trip back to China gave me a startling realization that the economy has improved beyond recognition. According to our estimate, China's real GDP will surge to above 55 trillion RMB by 2020 from 30 trillion RMB in 2010. Contrary to the prediction of a "hard-landing" by some forecasters, the economy is bouncing back, driven in part by a recovering US economy, which grew 2.5% in the 2nd quarter this year. 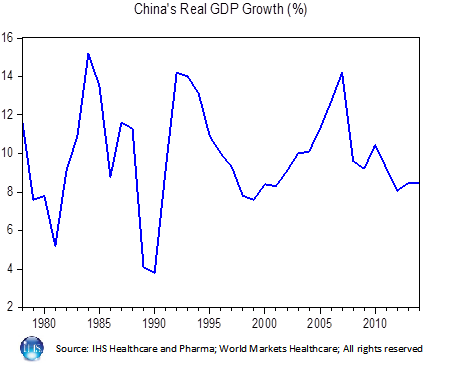 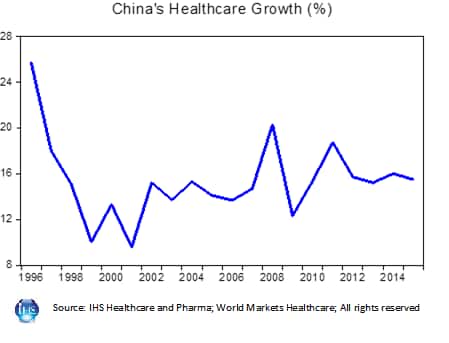 Since the start of reforms in late 70s, China's economy has enjoyed tremendous growth, surpassing Japan as the 2nd largest economy in 2010. That is the result of growth strategy focusing on investment and exports. However, such a strategy has proved unsustainable. With Europe and the US experiencing income and import growth declines during the global economic downturn, China has suffered a huge decline in net export growth during the period. Now it appears, China's new leadership has finally made up its mind to change its growth strategy.

Reflecting its re-balancing growth structure, the new growth strategy will give more priorities to consumption and service sector. Benefiting from the new strategy will be the healthcare sector. We project a steadily-growing health sector, driven by income, aging society and policy factors.

The income factor
My last trip to China saw fast-paced growth in cities along the east coast. Amid growth, we expect to see a continuously expanding middle class in China. By 2022, McKinsey research suggests, more than 75 percent of China's urban consumers will earn 60,000 to 229,000 renminbi ($9,000 to $34,000) a year-in purchasing-power-parity terms, somewhere between the average income of Brazil and Italy. The continued strong growth of the middle class will boost health spend, providing new market opportunities for both domestic and international companies.

The aging population
My last trip also saw the elderly queuing up in long lines at the hospitals, revealing the unmatched demand for healthcare service. As a percentage to total population, the aging population in China has surpassed that in the US. China's rapid socioeconomic and demographic transitions associated with the reforms have led to a major shift in the burden of illness, that is currently dominated by an epidemic of chronic, non-communicable diseases (NCDs) particularly among the elderly. The huge demand for NCDs treatment creates opportunities for big pharmas.

The policy factor
The government has recently increased health insurance coverage towards 95% of the population. In addition, Beijing has boosted health coverage for the farmers in the rural areas. A pilot scheme introducing evidence-based clinical pathways and new payment models in rural county hospitals is being considered by the government for implementation on a national scale. Meanwhile, the government has released the newly revised Essential Drug List (EDL). EDL aims at ensuring that rural and low-income patients can gain access to the most basic medicines at an affordable price. Such policy moves will benefit local low- and-middle income patients and hospitals, but end up a mixed bag-greater markets but lower drug prices-for big pharmas. Nonetheless, we expect the negative pricing impact to be outweighed by the growth momentum unleashed by the massive health insurance expansion, the emergence of a middle class, and the new leadership's commitment to re-balanced growth. Against such backdrop, we expect total health spend to grow 15.2% this year and 16.0% next.