China's defense industry is the fastest growing in Asia, according to analysis on the new Market Potential Index from Jane's.

"Multiple factors are driving rapid industrial development across Asia," said Paul Burton, research director at Jane's. "In addition to economic growth and a desire for military self-sufficiency, a complex security environment characterized by North Korea's ongoing nuclear program, and overlapping territorial claims in the East and South China Seas are leading to rapid growth in indigenous defense production throughout Asia.

"China's defense industry has made substantial progress over the past decade towards achieving the advanced capabilities targeted by Beijing," Burton said. "Further industrial reforms are required for China to address remaining capability gaps and attain its goal of at least parity with the world's most advanced industrialized states. Beijing continues to transform its defense industrial base from one that imitates into one that innovates." 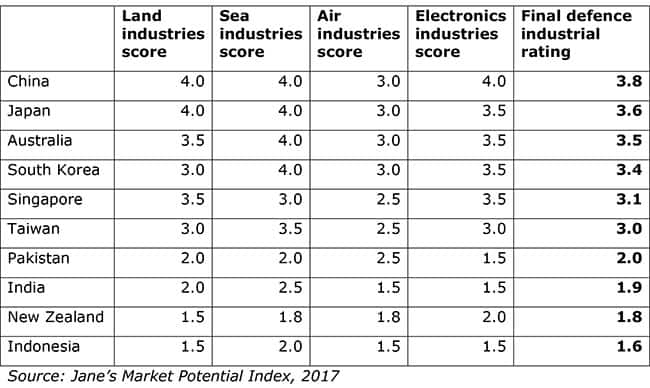 "What the countries at the top of this list have in common is strong government-backed research and development investment, a long-term approach to the growth of their national defense industries, and an emphasis on the involvement of domestic companies in national defense equipment programs," said Guy Anderson, associate director at Jane's.

"Greater government-backed research and development investment in defense sectors has been a feature of the Asia Pacific as a whole, with regional investment having climbed 32 percent to $16.7 billion over the last five years," Anderson said. "Over the next decade, we expect defense industrial self-reliance to increase in this part of the world, and for the defense industries of the Asia Pacific region to make a larger dent in world export markets."

The Jane's Market Potential Index assesses the status and appeal of 93 world defense markets based on factors that include defense investment, defense industrial capabilities, procurement procedures and protocols, trade mechanisms, embargo status and political, economic and security considerations. Each market is ranked against 36 ratings, with scores of 0 (low) to 5 (high) a positive or negative appeal.

National defense industrial capabilities are scored 0 (low) to 5 (high) on the basis of the existence of manufacturing, design and maintenance capabilities in land, sea, air and C4 domains and the sophistications of the capabilities present, based on the assessments of Jane's analysts.

To request a demonstration or for more information, visit Jane's industry solutions.