The policy directions for China's 14th Five-Year Plan (FYP: 2021-25), approved in March 2021, indicate a partial reversal in the country's approach toward involvement in overseas initiatives, while encouraging Chinese companies to invest in regions and sectors that offer clear benefits to China's strategic goals.

China's renewed focus on its national objectives and the Asia Pacific region, along with a focus on environmental sustainability and climate change, could translate into a stricter selection process of target markets and initiatives. Consequently, a shift in priorities, including a revision of the scope of the Belt and Road Initiative (BRI), may affect the largest beneficiaries of Chinese support. The new BRI guidance for the 14th FYP highlights the importance of commercial viability of the target projects, indicating a leading role shift from the government to the enterprises with more commercial orientation for BRI projects and more diversified funding sources.

While most African and Middle Eastern countries have a preliminary agreement with China and are part of the BRI, only a handful of them were identified as "primary bilateral partners" by the Chinese government, which IHS Markit defines as having a higher diplomatic relationship than does a "strategic partnership" in China's diplomatic hierarchy. The level of diplomatic relationship has been a more important driver of China's involvement in the region, provided that projects served national interests, despite most of the initiatives carried out by Chinese players being branded under the BRI. 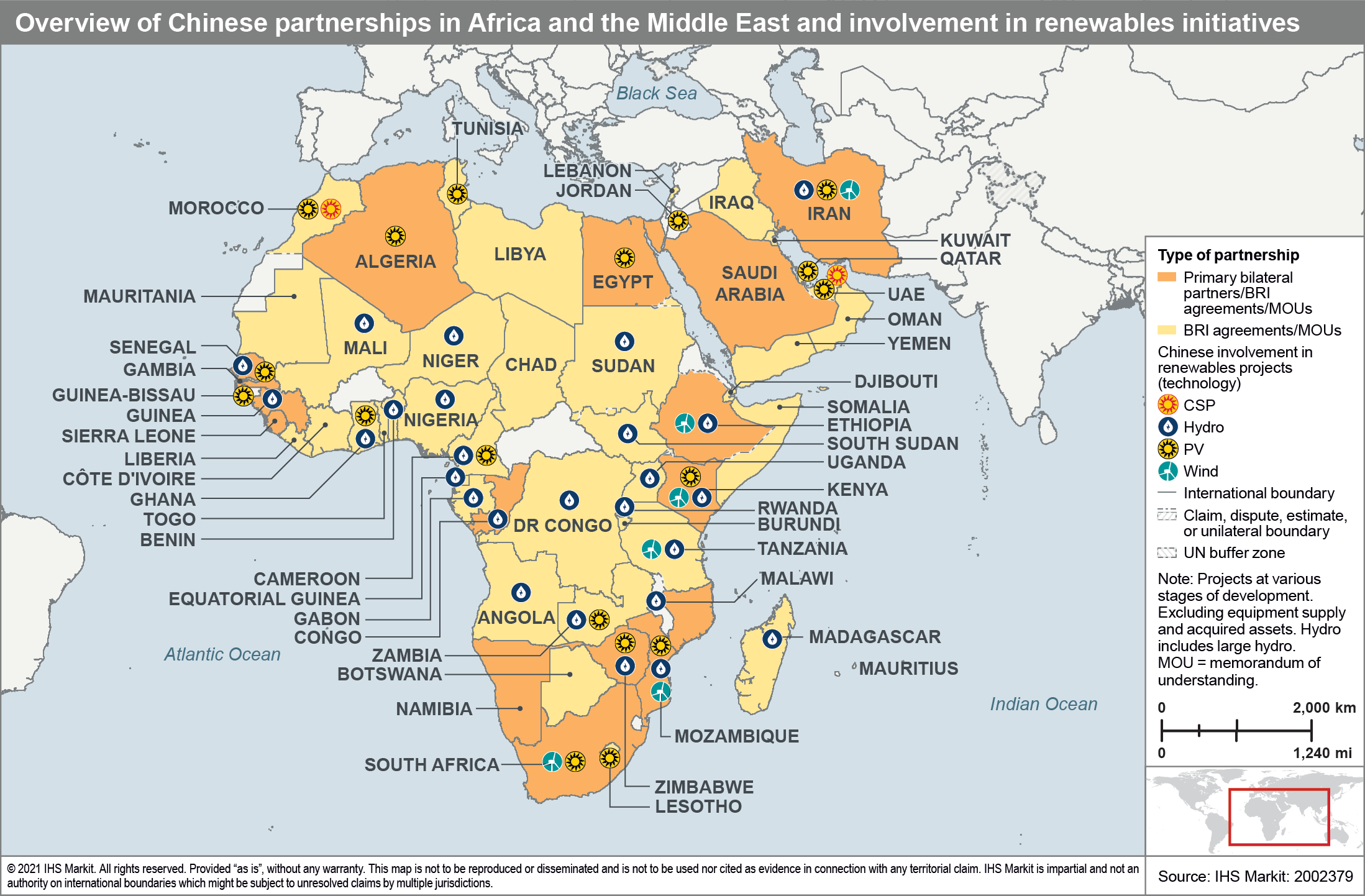 Chinese companies have been heavily involved in the construction of gas-fired and coal-fired plants across Africa and the Middle East, as well as transmission and distribution infrastructure. Along with the participation of China in most of the large hydro projects in Sub-Saharan Africa, Chinese companies' presence in power-related activities has facilitated a gradual expansion into other sources of generation such as wind and increasingly solar photovoltaics (PV). The availability of local resources has directed the focus of the investment as support was given to local governments to increase their power supply levels.

Chinese participation in the Middle East and North Africa's power and renewables sector is gradually expanding to the construction of power plants, and more recently, the strategic acquisition of key assets. But Chinese players are likely to play a much larger role in clean energy initiatives as the region has embarked on an energy transition path.

African and Middle Eastern countries need substantial funds to support long-term renewables buildout; they will have to raise more than $230 billion in project financing, according to IHS Markit estimates, to be able to achieve the expected level of renewables additions projected in the long term. Multilateral institutions and bilateral development support have been key and will likely continue to represent the region's main source of financing in the medium term. Yet, China has a big role to play in this context, as Western economies, which sponsored large renewables projects in countries like Egypt and Tunisia, are still dealing with the impact of the COVID-19 pandemic on domestic economies while China has largely recovered.

The positioning of Chinese companies along the value chain in some of the key countries in terms of market potential will likely lead to more participation in future projects. Their presence will allow the consolidation of existing partnerships with local players, thus facilitating an expansion of their role in future initiatives.