On 21 December 2021, China's National Energy Administration (NEA) published a draft update to the Measures for Administration of Ancillary Services (the "Measures") (电力辅助服务管理办法), the overarching document governing ancillary services in China. The update—the first since the "Measures" was originally published in 2006—was long due given the significant changes that have occurred in China's power system since. Not only have market reforms progress across the value chain, but also China's power generation mix and demand profile have evolved. Variable generation sources like wind and solar power swelled along with demand. From 2006 to 2021, wind and solar's share in generation grew more than tenfold, from less than 1% to 12%, while power demand nearly tripled.

What do these changes mean for key stakeholders? 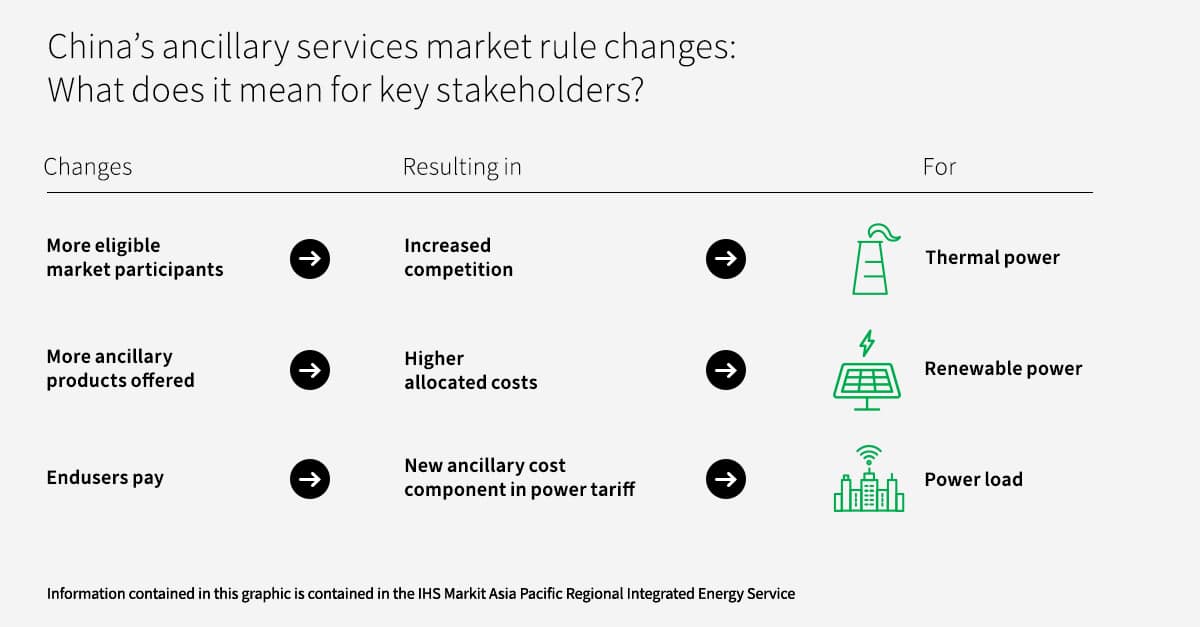 While ancillary services costs were previously cycled among generators, the update proposes passing through these costs to power consumers for the first time, codifying the long-discussed "who benefits, who pays" principle. In other words, power consumers are named as beneficiaries of ancillary services and will now help pay for them. While only marketized power users will be subject to these costs in the initial stages of implementation, this marks a fundamental change in power tariff setting, introducing a new ancillary cost component.

The rule changes will impact renewable and thermal generation differently depending on the ancillary product. Variable renewable sources like wind and solar are still named as the main beneficiaries of the downward ramping (peak shifting) ancillary product. As wind and solar power generation increases, demand for downward ramping ancillary services will also increase, resulting in higher allocation fees. These same fees, meanwhile, will likely decrease for thermal plants as more of the allocation expenses are passed on to power consumers. Thermal plants may enjoy higher net revenues given they are still the major providers of ancillary services in the Chinese power market. On the other hand, they will also face increasing competition as more participants enter the market.

The new rules bode well for load aggregators and battery storage projects. Previously, these users were largely barred from participating in ancillary services markets since they were not classified as power generators. The new rules specifically name non-generating assets as eligible market participants, removing the market-entry barrier and enabling new revenue streams for them.

The "Measures" is a high-level document so specific details on implementation are largely awaiting follow-up documents. While this leaves several questions unanswered, the overall direction set by the updated "Measures" document is clear. Removing the operational barriers in previous ancillary market rules will allow more players into the market. This has the potential to spur on development of novel business models like energy demand services or electric vehicle smart charging. Demand for ancillary services will only grow as China's rapidly deploys renewable power to achieve its carbon neutrality pledge. As ancillary services costs grow, the question of who pays will also become more crucial.