China's increased focus on energy security is driving a revitalization phase. This shift follows a long period of muted investment caused by lower oil and gas prices, coupled with unsuccessful efforts to replicate US success in unconventionals resource production. A government push to increase production is resulting in commitments from domestic national oil companies (NOCs) to ramp up domestic production and increase foreign participation. This is clearly welcome news for companies holding existing acreage, who will assess recent policy changes and signals to better position themselves in China. The implementation of the NOC plans, along with a government drive for more diversified participants in the exploration and production (E&P) sector, could signal an improved trajectory for investment and production.

As the largest oil and gas importer in the world, China appears ready to rejuvenate its E&P sector. Domestic oil production has been declining since 2016, caused by a highly mature resource base. The widespread use of enhanced oil recovery-related solutions for major producing fields was very expensive, making domestic resources less competitive. Although China has huge unconventional gas resources, the ability to translate them into real production volumes has been difficult, and it has not been possible to meet the government's nconventional gas targets. Complex subsurface conditions and above-ground risks contributed to the challenge.

China's dependency on imported oil reached a level of 70% in 2018. This increased dependency on imported oil and gas made energy security a top priority for the Chinese government. The China-US trade dispute has only accentuated China's energy security concern. The US shale revolution has made US a net exporter, and it will become the biggest contributor to crude production growth in the coming years. This combination of factors is further driving China to accelerate its energy security strategy and execution.

Yet energy security is not a new concern for China. Security drove Chinese NOCs to expand their international portfolios aggressively from 2009 to 2013, when the oil price was above $100 per barrel. During those years, China's economy was rapidly expanding, driving increasing oil demand. With oil prices forecasted to continue increasing - given the rising global demand from developing countries like China and India - aggressive international merger and acquisition activity (M&A) was considered the most viable strategy for Chinese NOCs. However, the oil price crash in 2014 put a brake on that approach. Assets acquired at high cost became burdens to the NOCs, and further expansion was no longer a viable route.

After some portfolio reassessment and consolidation, it was expected that international M&A activity would rebound as prices recovered. Instead, NOCs renewed their focus on domestic assets as a source of production growth (see Figure 1). 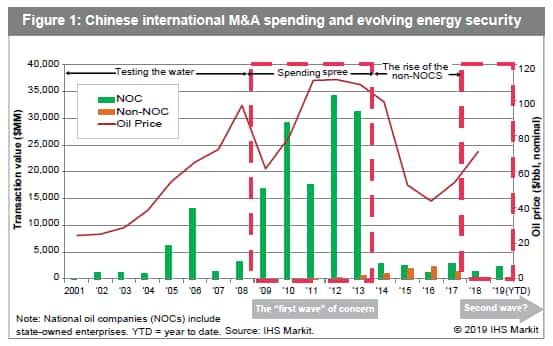 Echoing the government's call for domestic oil and gas production increases, the major NOCs committed to China's Seven-Year Action Plans. The plans, which focus on domestic upstream production from 2019 to 2025, are orchestrated by the National Energy Administration.

The emphasis on exploration, especially in frontier areas, reflects the challenges of production growth with maturing producing portfolios. Both CNPC and CNOOC plan to increase exploration spending. CNPC will spend 5 billion yuan (US$640 million) per year on frontier exploration, five times the current spending level. By 2025, CNOOC aims to double exploration activities and proven reserves compared with its 2017 level.

Unsurprisingly, shale and tight gas remain a key focus for the NOCs. CNPC aims to produce 24 billion cubic meters (bcm) of shale gas (from 4.2 bcm in 2018) and 35 bcm of tight gas in 2025. The organization will spend 54 billion yuan (US$7.8 billion) on shale gas in the Sichuan basin in the next seven years. CNPC also revealed its four-step strategy for shale gas in Sichuan earlier this year, aiming to produce 42 bcm in 2035.

The improved economics of shale gas - coupled with a more investor-friendly regulatory environment and clear commitments from the NOCs - provides a basis for achieving these targets. However, challenges around oilfield service capacity, as well as the anti-hydraulic fracturing sentiment in the earthquake-prone Sichuan region, add complexity.

Over the years, the Chinese government has been exploring reforms and incentive programs to vitalize the industry. The reforms focused on four areas:

Subsidies were the primary tools used to incentivize unconventionals when activity started. Even in May 2019, a new unconventional gas subsidy program includes tight gas for the first time. It offers extra weighting for coal bed methane and production growth in heating season.

Since 2017, policy focus gradually shifted from subsidies to structural reform. A May 2017 government document, "Several Opinions on Deepening Oil and Gas Reform," set the blueprint for reform. It aimed to create a new E&P competitive landscape in China, which is dominated by the NOCs, has diversified participants, and includes new acreage-awarding and exit mechanisms. Reform plans have been significantly accelerated since the China-US trade dispute escalated in 2018.

Several new policies have been released to attract foreign investors, including eliminating approval by the National Development and Reform Commission for the Overall Development Program and piloting different acreage-awarding methods. A more recent step is to allow foreign investors to invest in upstream projects independently, without partnering or forming a joint venture with the NOCs.

Through these policy updates the government also has sent clear signals to foreign investors, encouraging participation in China's E&P. Yet attracting new foreign players poses continued obstacles, such as the availability of attractive assets for foreign companies.

More incentives and reforms can be expected to further open the market, as China aims to secure its energy supply by producing more domestic oil and gas. Overall, these recent steps are positive. However, they also should be compared to the competition from other countries that are making positive changes to attract their own new investors.