China Unconventionals 2.0: “What Would it Take to Believe?”

There is a wide range of views regarding the world energy outlook, with several major points of uncertainty, including growth in renewables and adoption rates for electric vehicles. These uncertainties have major implications for future oil and gas demand. However, there is a consensus that rising global prosperity will drive continued growth in primary energy demand.

The rising share of renewables is led by China, India, the European Union and the United States. China's evolving energy mix toward lower-carbon fuels will enable carbon emissions to decline amidst growing energy demand. Nevertheless, in addition to renewables growth, China will still require tremendous growth in natural gas, in part, to offset a decline in coal. Even with extraordinary growth in renewables, hydrocarbon-based fuels still will be required to supply about two-thirds of China's energy needs in 2040.

China does have vast (i.e., estimated at roughly 40 billion bbls) resources of conventional and "tight conventional" oil in a few well-established basins.

Perhaps surprisingly, China's domestic gas resources are already reasonably cost-competitive in economic terms, in comparison to more expensive pipeline gas and LNG imports. And with greater focus on well-productivity (i.e., rather than well cost per se) the competitiveness of China's domestic gas (i.e., on a dollar per Mcf basis) might be made even more so. 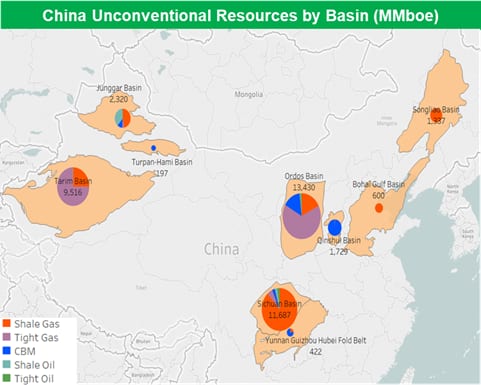 The Ordos Basin is China's largest producing gas basin, with an aerial extent of about 250,000km2. Since the year 2000, more than 200 exploratory wells and 21 discoveries - including the giant Sulige field (47 Tcf proven gas in place) - have been drilled in the Ordos Basin.

The Sichuan Basin is China's largest tight/shale gas basin (followed by the Tarim Basin), but its reserves remain largely unproved. In 2017, roughly 600 wells were drilled, reaching production of roughly 318 Bcf/year and with output planned to more than double (i.e., 776 Bcf) by the year 2020. By the end of 2017, Sinopec's shale gas production capacity in the Sichuan Basin's Fuling Field (aka Jiaoshiba) alone had reached 353 Bcf per year.

In 2018, PetroChina's shale gas field rig count rose from 38 to a record 125 in the Sichuan Basin, with new wells drilled in Weiyuan and Changning fields rising to 162 - a year-on-year increase of more than 400%. PetroChina announced accelerated shale gas development to meet a 2020 production target of 420 Bcf, with about 700 new wells planned (2018-2020) from three projects (estimated at about $5.5 billion).

Meanwhile, the US has become an energy-secure, net exporter of oil and gas in 2018. Note that one month of activity in the Permian Basin exceeds one year of activity in the Sichuan Basin. The US rig count is presently about 1051 rigs - the Permian Basin alone is 473 rigs, completing 400-450 wells per month, with new well production per rig of roughly 600 bbl./day and 1200 Mcf/day.

China's vast resources may offer the potential to eliminate its costly reliance on LNG imports, but this would require major changes.

What Would It Take?

What would it take for China to achieve sufficient domestic upstream E&P development to displace expensive, foreign LNG imports?

First, China's upstream activity would require much more capital (and workforce) to sustain a doubling or even quadrupling of the current activity and development plan. This also would likely require a much greater participation by international operators, and with more access to higher-quality acreage. This also would likely require a broadening of the existing foreign partnerships (i.e., Chevron, Husky, Shell, and Total) beyond their focus on technically challenging conventionals (e.g., deepwater, sour gas).

Furthermore, a scaling up of the activity to required levels would require more rigs for gas-directed drilling - rigs with top-drives to enable directional/horizontal drilling. This would also require more materials and equipment - more water, proppant, pumping equipment, trucks, etc. - to enable a more than doubling of the present activity levels and drilling campaigns. This also would likely require a much greater participation by, and access to, international services companies. It would also necessitate more, and more 3rd-party access to, gathering lines, take-away capacity, and gas processing capacity.

It is quite likely that this would require making China's State Council CBM and shale gas fiscal incentives equally applicable to tight gas.

Now, as previously mentioned, China well costs are surprisingly cost-competitive with US analogue play well costs. In many cases, gains in well-productivity will be the key to lower-cost gas. Much higher well-productivity - especially in shale gas wells - is necessary to improve effective cost-competitiveness. This is likely to require the development of world-class capabilities and the adoption of leading international advances in several areas, such as:

China's declining oil and modest gas production create an increasingly large oil (70%) and gas (40%) import dependency. Meanwhile, the US has become an energy-secure, net exporter of oil and gas in 2018. China's vast resources offer the potential to eliminate its costly reliance on LNG imports, but this will require major changes in order to fill the domestic production gap.

Kunfeng Zhu is a Principal Research Analyst at IHS Markit.