China to account for 34% global RGB OLED capacity in 2022

Among players, Samsung Display reigns supreme with 87% of global RGB OLED capacity, followed by fellow South Korean rival LG Display, and Tianma and Visionox from China. The Chinese are aggressive in expanding RGB OLED capacity, especially on flexible display technology, and China's share of market is projected to soar rapidly in the next couple of years.

Developments on the Chinese front include the following:

For their target, all the new RGB OLED fabs under construction in China aim to produce flexible substrates at full screen size, utilizing the 18.x:9, 19.5:9 super-wide aspect ratio as well as a curved-edge smartphone display form factor for the next couple of years. In the long term, the fabs will undertake production of bendable and foldable screens for mobile devices.

The charts below show Chinese fabs in development for Gen 5.5 and above as well as for Gen 8. 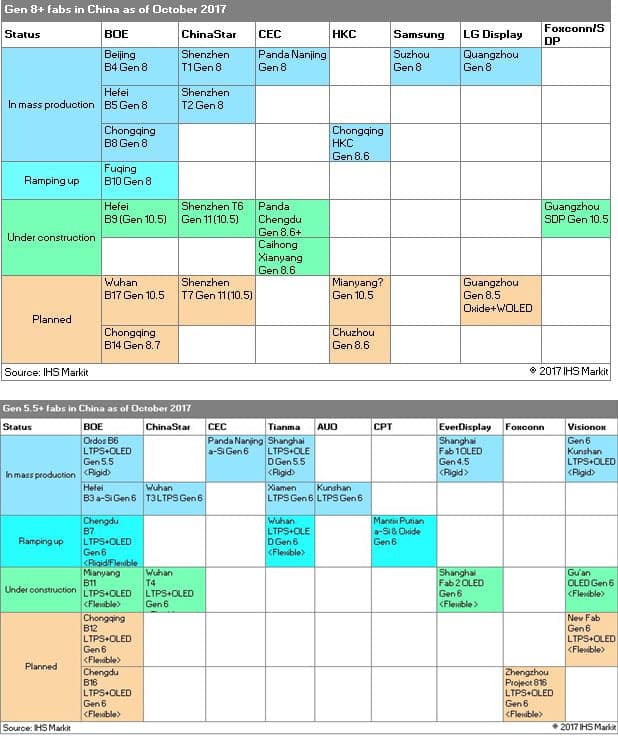 By 2022, Chinese makers will possess RGB OLED capacity of some 10.7 million square meters, equivalent to 34% share of the global total, Chinese capacity will mostly target the smartphone display market, reserving some volume for virtual reality and augmented reality applications as well as for the automotive space.

Despite the aggressive expansion of Chinese RGB OLED makers, concerns remain, especially because flexible OLED technology requires a long learning curve that impacts production variables such as yield rate, stability, and reliability. Another important issue is customer cooperation: Because of the long learning curve, smartphone makers and other similar customers will need patience to work with the just-emergent technology on issues like display panel design and mass production.

Chinese OLED makers also may face fierce onslaught from Samsung Display, a player of indisputable power and might with the commensurate capacity, technological acumen, and strength to block Chinese manufacturers in their attempt to grow.

Indeed, Samsung Display remains the dominant force in RGB OLED for smartphone displays. Its RGB OLED capacity will increase from 7.7 million sq m in 2017 to 16.6 million sq m in 2022, with capacity built on giant fabs like the A4 and A5 in South Korea.

Centralizing giant fabs in one site can be advantageous, offering the best economies of scale, optimum efficiency, and a streamlined supply chain. Massive OLED fabs can also serve as a bulwark of stable and sufficient supply for large purchase orders from key customers; in Samsung Display's case, these would be its internal customer of the same name, for the Samsung Galaxy line of smartphones; and from Apple, for its industry-leading iPhone. Last, giant fabs are well-placed to enjoy cost savings in operations given that these fabs often already boast smooth throughput-an advantage they can wield over their competitors.

The centralized, giant-fab approach of the Koreans contrasts with the smaller, distributed tactics employed by China's OLED makers. Because a giant fab at this point would provide little practical benefit, the Chinese are opting instead to build several dispersed and separate OLED fabs. Moreover, domestic players hoping to build infrastructure such as that required for RGB OLED will need the support of subsidies from local governments. As a result, it makes sense for the Chinese manufacturers to build around the country as they chase the available money from government coffers.

This type of investment, however, is not suitable for very-large-scale WOLED initiatives-simply because the risks for failure are too high. This is also one reason why there are numerous state-of-the-art Gen 10.5 fabs in China for TFT LCD, where both the technology and market are comparatively mature, but which isn't the case with Gen 8.5 WOLED.

The much smaller capacity of the Chinese, compared to that of Samsung Display, may also shape competition in the future. Samsung Display will use its colossal capacity to meet the needs of the South Korean maker's two critical customers-Samsung and Apple. Chinese makers, meanwhile, will be targeting the relatively smaller projects of smartphone makers in China, such as Huawei, Xiaomi, Vivo, Oppo, Meizu, Lenovo, and ZTE, along with many white-box makers.

With the smartphone war now expanding from brand allure to also include essential components and features such as the phone's display, the challenge facing China's makers will be most acute during a stagnant or oversupply market situation. Because Apple and Samsung on their own won't be able to digest all the excess RGB OLED panel output produced by Samsung Display in the event of market stasis, the South Korean titan will bring to bear all of its considerable heft and might to go after the local Chinese smartphone makers that currently make up the customer base of domestic OLED makers.

That is certain to put Chinese players in a bind, as they will inevitably have to compete with a powerful foreign-based player on the home front, on ground zero where they are supposedly most secure.

By 2022 and assuming that expansion is carried out by each key player accordingly, RGB OLED capacity for each player will stand at the levels shown below, based on IHS Markit forecasts in the Display Supply Demand & Equipment Tracker. The list includes only those companies deemed to have a greater than 30% possibility of investing in forthcoming RGB OLED capacity. 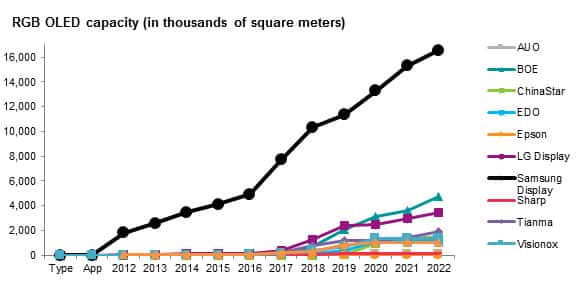