Business activity in China expanded at the slowest pace for over two years at the start of the fourth quarter, according to the latest Caixin PMI data. October saw the export-led slowdown spread beyond manufacturing to the service sector. Softer demand conditions hint at the risk of a further slowdown in coming months.

With trade wars dominating the media headlines, it was not surprising to see an increasing number of survey participants (particularly in manufacturing) expressing concerns over the negative impact of US-China trade dispute on future output. 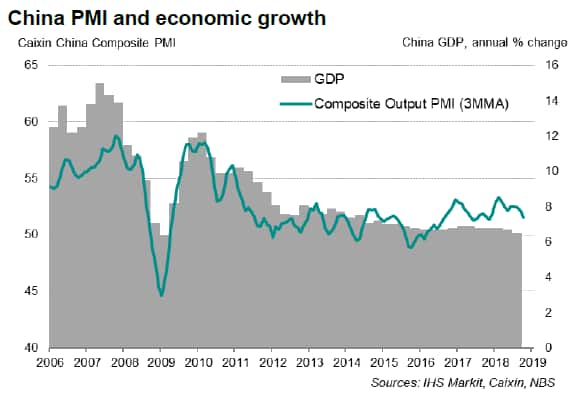 The Caixin China Composite PMI™ Output Index (which covers both manufacturing and services) fell from 52.1 in September to 50.5 in October, which was the biggest drop (in terms of index points) for five-and-a-half years.

The latest reading was the lowest since June 2016, signalling only a mild improvement in the health of the Chinese economy.

Manufacturing led the slowdown, with factory output broadly stagnant in October, compared to the prior two years of expansion. Manufacturing orders grew marginally, dragged down by a further decline in new export business. Foreign sales have now shrunk for seven straight months. The export downturn was linked by some firms to rising trade tensions.

The October surveys also brought news that the slowdown in manufacturing appeared to have broadened to the service sector, which reported the softest rise in business activity for just over a year. In addition, new business received by service providers barely grew. 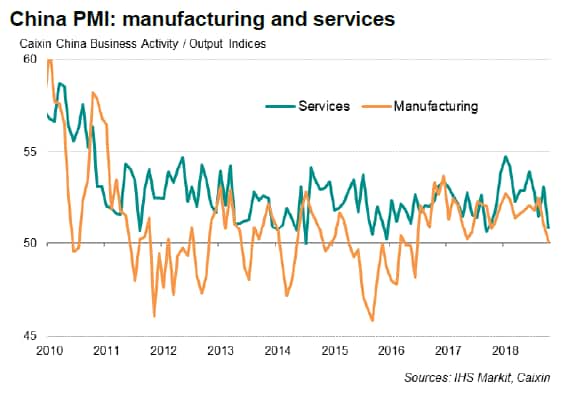 With forward-looking survey indicators pointing to weaker performance ahead, the latest PMI data set the stage for a softer end to the year, and therefore underscore the need for new supply-side policy measures designed to stimulate economic activity.

Combined new order growth across both manufacturing and services was the weakest in October since early 2016. Business expectations of future growth meanwhile slipped to a three-month low, easing to a near one-year low in manufacturing. Worries over rising trade frictions between the US and China were a key factor affecting business sentiment. The labour market consequently remained sluggish, with factory job numbers continuing to decline. 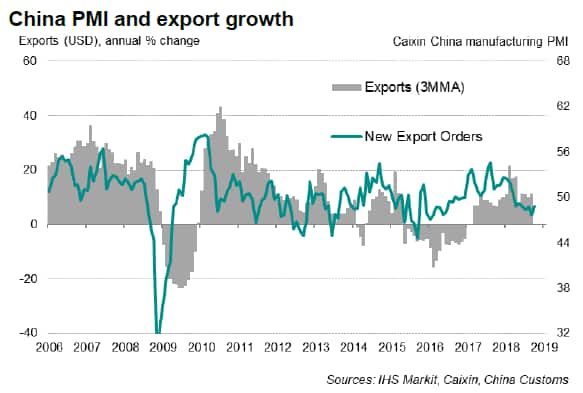 Chinese firms partially passed on greater cost burdens by increasing output charges. However, competitive pressures reportedly limited the extent to which many firms were able to raise prices. While manufacturers hiked average selling prices at a rate similar to recent months, service sector charges rose at the strongest for four months.