Tightened restrictions to fight the Omicron wave has led to a renewed decline in manufacturing production in mainland China, with demand also weakening - notably from export markets. With producers' order books becoming increasingly depleted, firms cut staffing levels to an extent not seen since April 2020. The scope for Chinese authorities to combat the slowdown were enhanced by price pressures remaining very subdued, certainly by international standards. However, perhaps of greater concern is the impact on global supply chains - and inflation - from this additional disruption to the Chinese manufacturing economy. 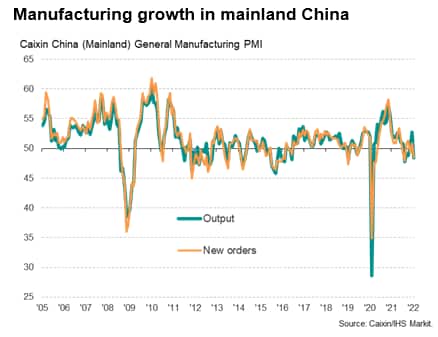 Manufacturing production in mainland China fell in January, according to PMI survey data produced for Caixin by IHS Markit, as the Omicron wave disrupted business activity.

The survey data had shown output growth accelerating in December ahead of the Omicron outbreak, rising at the fastest rate for two years, as business revived from the Delta wave, which had been linked to output falling between August and October. However, the re-imposition of restrictions to safeguard against the spread of COVID-19 in several regions during January were reported to have again curbed factory production and stymied demand.

The drop in production during January was the third largest recorded since the onset of the pandemic, albeit far weaker than the downturn recorded during the first lockdowns.

New orders likewise fell back into decline amid the January Omicron restrictions, fueled by the largest drop in export orders recorded by the survey for 20 months.

Ominously, the January survey also showed that the drop in new orders caused backlogs of uncompleted work to fall at a rate not exceeded since the height of the global financial crisis in 2008-9. This depletion of manufacturing order books hints at the build-up of excess capacity relative to demand, and in turn caused increasing numbers of firms to scale back workforce headcounts. The resulting decline in factory employment was the largest recorded since the early stages of the pandemic in April 2020. 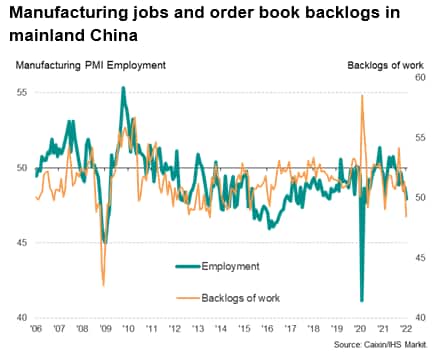 An additional impact of the Omicron wave was a further lengthening of supply chains, with average supplier delivery times lengthening to the greatest extent since October. This constriction of supply in turn drove up prices for purchased inputs at manufacturers, though importantly the rate of inflation remained far below the surging rates of increase seen in the months prior to last November. Average prices for goods leaving the factory gate also rose at a sharply reduced rate compared to that seen throughout much of last year, albeit picking up slightly in January. 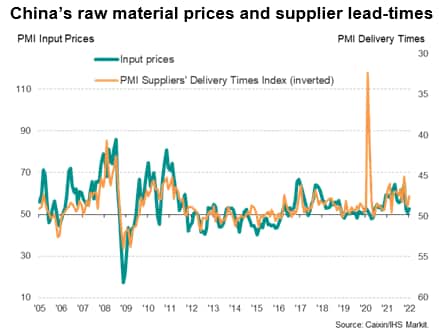 The marked easing of inflationary pressures signalled in the manufacturing sector in recent months adds to scope for policymakers to boost growth and employment in the coming months and thereby manage the impact of Omicron. However, it is the impact of reduced production in China which will be of concern for policymakers in other countries, with restricted trade likely to add to supply chain woes, and will add weight to suggestions that the inflationary pressures of the supply crunch could persist well into 2022.