Starting from the start-up of SP Chemicals' gas cracker (ethane and propane feedstock) in August 2019, another six newly designed flexible-feedstock steam crackers have been added in mainland China, with more to come online in the next few years. Meanwhile, more than 2 million metric tons per year of propane dehydrogenation (PDH) capacity has also been added since 2019, with another approximately 8.5 million metric tons expected to come online by 2024, driven by thriving markets for propylene and its downstream derivatives.

New steam crackers in China are now designed to be more adaptable to gas feedstocks (e.g., propane and butane) than older units, mainly driven by the rising global LPG availability (from the United States in particular) and the improved profitability of light feed crackers in recent years.

Before the start-up of SP Chemicals' plant, most of the steam crackers in mainland China were owned by national oil companies (e.g., Sinopec, China National Petroleum Corporation [CNPC], and China National Offshore Oil Corporation [CNOOC]), designed mainly based on liquid feedstock with limited flexibility. According to IHS Markit research, LPG-based ethylene production only represented about 9% of the total ethylene production in the region over 2015-20. Driven by the fast-growing LPG supply and improved economics, the proportion of LPG-based ethylene production in the region is forecast to reach 14-16% over the next three to four years.

In the meantime, owing to the attractive profitability of the PDH route, more and more new projects have been added in mainland China since 2019, which will bring considerable incremental on-purpose propane consumption for propylene in the coming years. 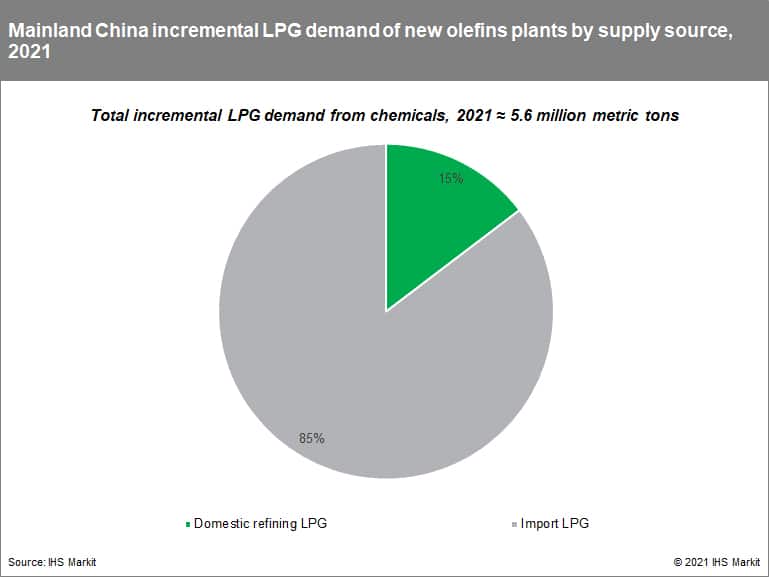 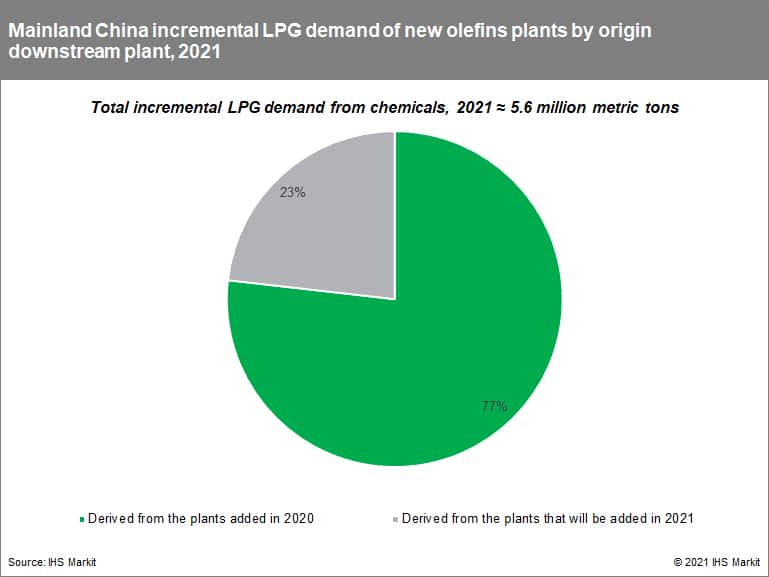 In mainland China in 2021, 85% of the new LPG demand from olefins plants (newly designed crackers and new PDH units) can be translated to about a 4.8 million metric tons import need, exerting great pressure on the global trade market and key suppliers such as the United States and Middle East region. This result will raise interesting questions amid uncertainties associated with these markets' upstream recovery, driven by the COVID-19 pandemic, oil prices, investor returns, and supply management policy.

Further complicating the outlook is the expectation that non-chemical demand for LPG will also recover in 2021 from declines in 2020 caused by the pandemic. Unlike the chemical sector, about 70% of the LPG fuel market in mainland China is supplied by local refineries. Incremental LPG demand for fuel in coming years should be relatively easily met by recovering LPG production from refineries, supplemented by import cargoes. Though non-chemical demand will be only a minor contributor to total import demand, it will not be the case that local supply can increase by enough to prevent the expected need for continued expansion of LPG imports to supply the new chemical plants.