China launches small-scale LNG exports to Cambodia: Is there room for growth?

On 14 January 2020 a shipment of five International Organization for Standardization (ISO) containers of LNG arrived in Cambodia. This event marks not one but two firsts: Cambodia's first gas imports and China's first gas exports to Southeast Asia.

Over nearly two decades, China has been using LNG containers to supply end users outside the pipeline system, provide emergency peak shaving, and most recently import small volumes from the international market. However, with moderating domestic demand growth, a new model has emerged: using ISO containers to divert surplus gas out of China.

China National Offshore Oil Corporation (CNOOC), who supplied the gas for this first shipment, sent the ISO tanks from its Fangchenggang transfer terminal in Guangxi province to Sihanoukville, Cambodia. The company is well-positioned to access the Southeast Asian market via its terminals along Southern Chinese coast and had previously planned for a "South-to-North" gas supply program in the domestic market. 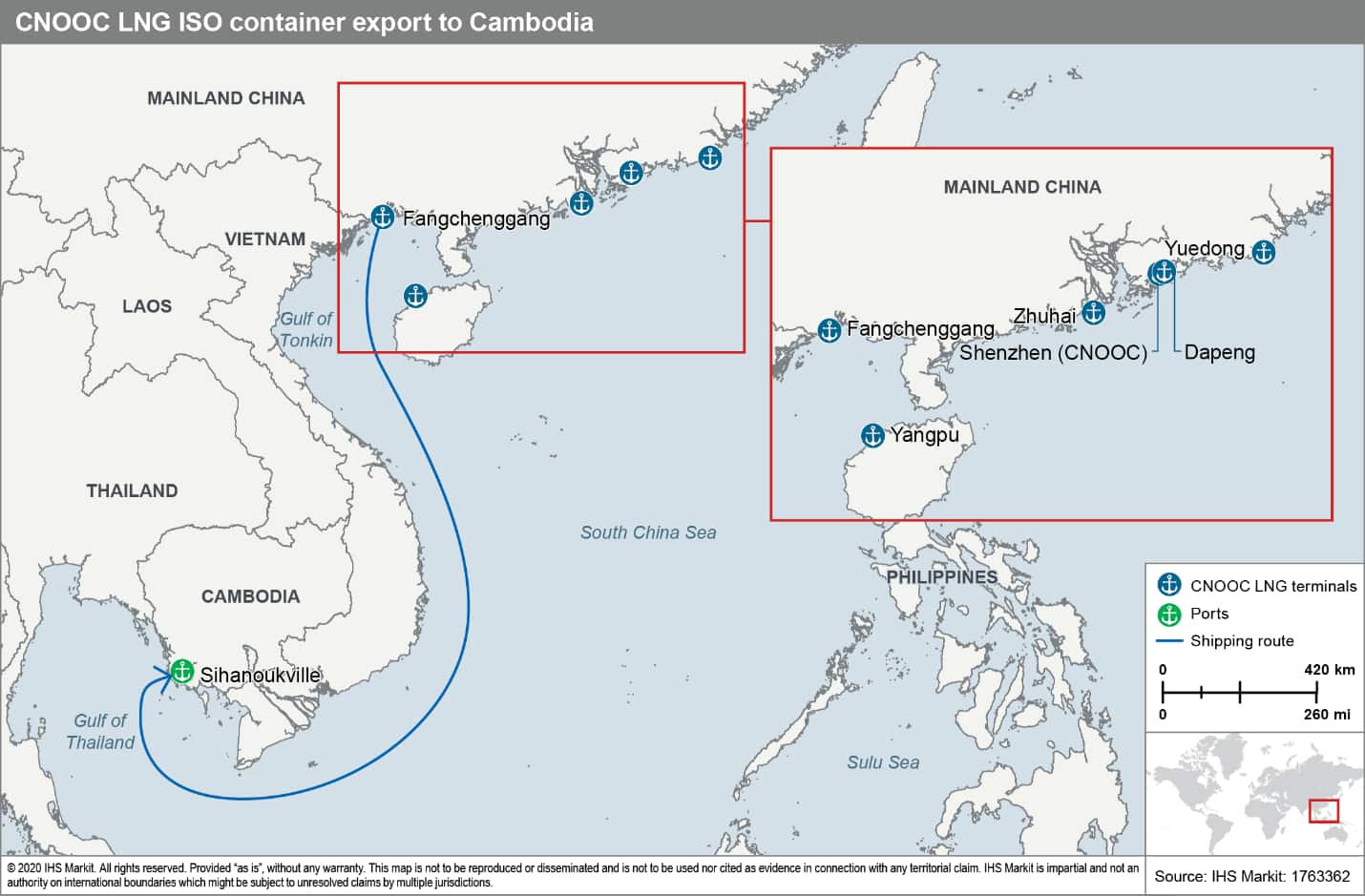 The shipment also marks Cambodian National Gas Corporation's (CNGC) first step in a plan to distribute gas to downstream users. CNGC plans to expand the use of ISO containers and LNG trucking to reach smaller energy consumers, which represent nearly 50% of total energy use in the country. As the only buyer with an LNG import license, CNGC intends to eventually bring the super-chilled fuel for power and transport through investment in LNG terminals and gas pipelines. Gas in both sectors benefits from cost competitiveness against oil products and power imports and appeals to the country's long-term goals of fuel diversity and clean energy development.

In the long term, with each ISO tank holding only around 17 metric tons of LNG, CNGC's larger plans cannot be sustained by ISO containers alone. The company currently plans to rent or purchase a floating storage and regasification unit by 2023. Until that happens, ISO tank imports will continue to be Cambodia's only short-term gas supply option.

CNGC's target to import 0.1 million metric tons (MMt) of LNG via ISO tanks in 2020 is equivalent to over 5,800 containers, which is quite a large number of tanks. Yet this barely amounts to one or two of regular size LNG cargoes. If we consider this in the context of China's over 300 Bcm of current market size, the amount is even smaller. Exports to Cambodia alone will not have a large effect on China's domestic market and exporters' business operations. In addition, ISO LNG shipping is a low-barrier entry industry, meaning China will face competition from other players in the Southeast Asian region.