China kicked off renewable mega base development for its climate ambition

100 GW of wind and solar predominantly in the desert area

At the Climate Ambition Summit last December, President Xi Jinping announced that China will bring its total installed capacity of wind and solar power to over 1200 GW by 2030. Together with the renewable energy build-out target, growing the share of non-fossil fuels in primary energy consumption to about 25 percent was also mentioned. Given the total wind and solar installed capacity by the time was only 535.6 GW, which means new build wind and solar over the next ten years will be more than 60GW annually in average, or the sum total of installations in the past two decades. Concerns were raised on resource adequacy to support such a scale of development.

On 13th March 2021, National People's Congress (NPC) approved the outlines of China's 14th Five-Year Plan (FYP), which is the centerpiece of industry planning and policy covering 2021-2025. Nine renewable energy mega bases were demarcated as the foremost pillar in structuring toward a modernized clean and low-carbon power system. According to IHS Markit's tracked provincial level 14th FYP targets, these nine renewable mega bases alone are likely to contribute about 300GW of wind and solar capacity by the end of 2025.

President Xi Jinping addressed the UN Biodiversity Conference (COP15) on 12 October 2021 via video link. During the speech, it was announced that China has kicked off the first batch of wind and solar mega bases development totaling about 100GW predominantly in the desert area, such as sandy desert, Gobi Desert and other types of barren land.

This first tranche of 100GW new build plan supports the nation's renewable energy capacity targets with a promising pipeline. Projects included in the first batch well spread across 16 provinces, all of which are expected to be commissioned by the end of 2023.

IHS Markit estimates that at least half of the proposed 100GW new build wind and solar will rely on transmission grid for export, with the other half refreshing regional consumption with greener attributes. Green hydrogen production, for example, was increasingly incorporated into renewable capacity additions planning. IHS Markit tracked over 14GW of wind and solar capacity announced in the name of green hydrogen production, out of which 9GW is tagged with this first bunch of renewable projects at mega bases.

Absolute land area required in supporting China's ambition in renewable energy deployment does not seem to be the key limiting factor. To meet the 1,200GW wind and solar installation target by 2030, total land area required is estimated at only about 7,028sq km, 0.07% of China's total land area. However, once intertwined with other functional land use and human activities, land acquisition and approval process become the most challenging steps for many renewable energy developers. Unleashing the desert area that accounts for 13.36% of China's total land area is likely to ease the tension of land use for renewable resources deployment amid the energy transition ambition.

State-owned enterprises (SOEs) will drive the new build of renewables at mega bases. Data tracked by IHS Markit shows that over 90% of the project resources released in renewable energy mega bases will be developed by central or local SOEs or their consortiums. This is in line with the expertise and competency within SOEs in managing gigawatt-level power project development as well as their grand renewable asset build target. With that said, competition among SOEs in securing project pipelines at the mega bases is expected to intensify, too. 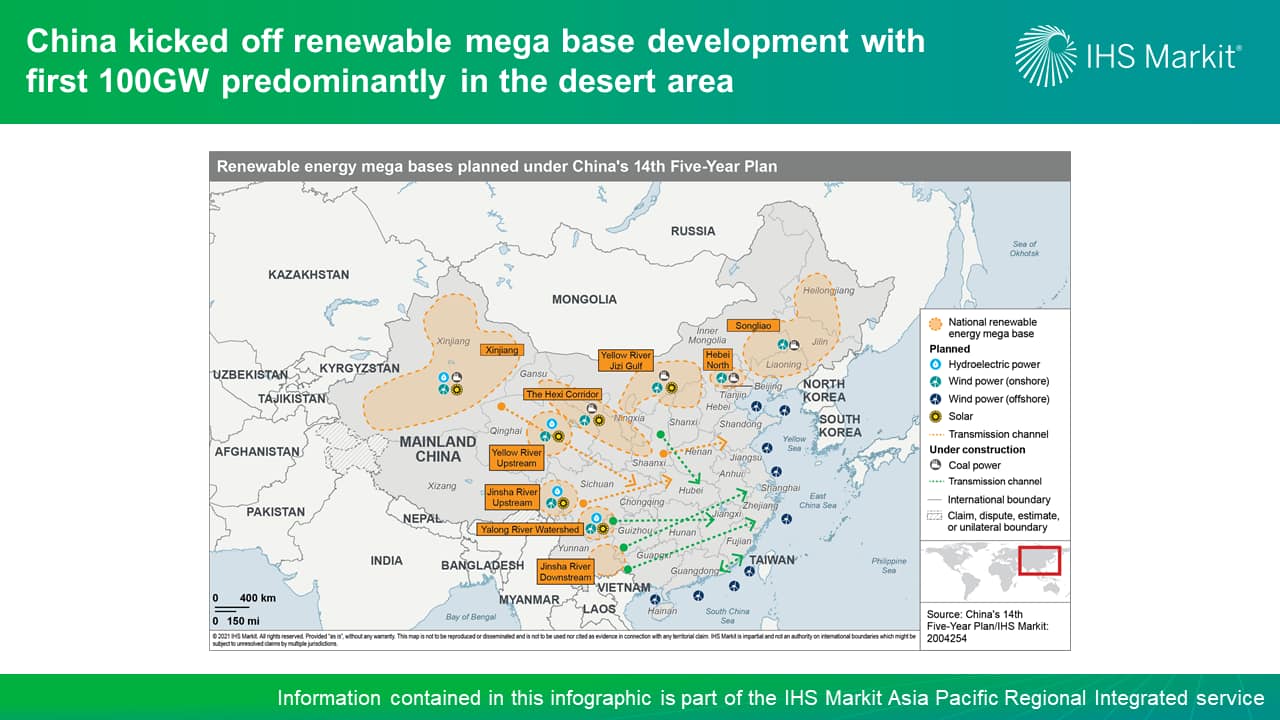