China further opens oil and gas upstream to foreign investors: How much impact can we expect?

The press conference of China's Ministry of Natural Resources (MNR) on the 9th January 2020 announced the (henceforth referred to as "the opinions"), which will be effective from 1st May 2020. With "the opinions", China further opens its oil and gas upstream, breaking the monopoly of oil and gas upstream by the authorized national oil companies (NOCs). As the latest efforts for China to reshape its oil and gas upstream, the policy update encounters the unexpected oil price crash in March 2020 before its implementation, bringing forth a lot of uncertainty, on whether the changes will bring any success:

The new policy from MNR: A welcome to foreign investors

"The opinions" focuses on three aspects of reform: mineral rights awarding management, oil and gas exploration and production management, and mineral reserve reporting management. Although all minerals are under the scope of "the opinions", the oil and gas E&P sector has the most significant and impactful changes. Those changes include:

Opening China's oil and gas exploration and production sector to non-NOCs, including foreign, private, or other state-owned enterprises (SOEs). Companies registered in China with net assets of 300 million Yuan (around $43 million) will be allowed to take part in oil and gas E&P and own E&P licenses, as long as they meet the safety, environmental requirements and regulations, and have the technical capability in oil and gas E&P.

The move in principle, provides considerably opening of China's oil and gas E&P to foreign and domestic private investors, breaking the monopoly by the authorized state oil companies under China's current E&P legal framework. As a trial implementation policy effective from May 2019, it heralds the modification of the legal framework that have been implemented for decades. The new Mineral Resources Law draft has been reported to be in the phase of soliciting opinions from the public; removing the authorization list is in the scope of change.

Applying competitive acreage awarding mechanism for mineral rights, including open bidding, auction and listing, limiting the agreement-based awards to only key national projects or resources. For oil and gas exploration licenses, China will continue to pilot in competitive license awards approach, aiming to form the final E&P license awarding mechanism in a steady way from the pilots.

In "the opinions", a guideline of the benchmarking acreage price by area of square kilometers is provided. The benchmarking price sets the floor of the price for auction and listing; it grows with the increase of WTI oil prices. With the direction of competitive acreage awarding set, the continued piloting efforts will eventually lead to a formal policy on oil and gas awarding mechanism in the future. 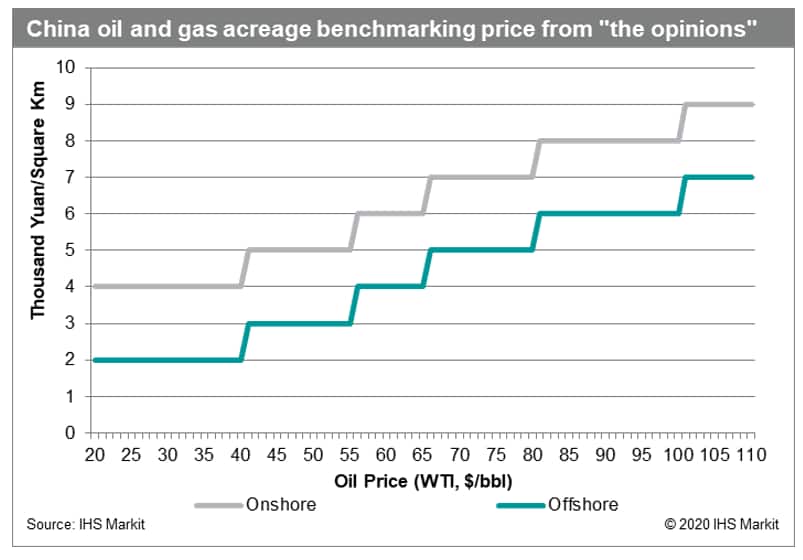 Under current regulations, production license, which is needed for the project to progress into production operations, can only be obtained by de-registering the exploration license. This creates complications for unconventional projects, which do not have a clear boundary between exploration and production. It demotivates foreign oil companies to invest in China's unconventional resources, facing the challenges to navigate through the system and monetize the early investments at exploration phase. This change reflects MNR's effort to optimize the regulatory framework to boost the exploitation of unconventionals, which have been the key resource type for growth.

Extending exploration license's term of validity from 3 years to 5 years. The exploration license can be extended twice when it expires; each extension prolongs the license another 5 years, which is changed from the 2 years under current regulation. However, 25% of the licensed area needs to be relinquished, as required by "the opinions".

The 3 years of validity for exploration license has also been a source of angst for foreign oil companies in the past, especially for unconventional projects. It takes longer to assess the potential of an unconventional acreage, which is different from conventional resources. To minimize the risks, foreign oil companies have been lobbying for regulatory changes to permit rolling oilfield development programs (rolling-ODP), as exploration activities cannot eliminate uncertainties sufficiently for unconventional projects. Under rolling-ODP, the oil company can develop the licensed acreage piece by piece with repetitive mini-exploration and development cycles. The rolling-ODP concept seems stretched for MNR at present - the change to 5 years of exploration license is a compromised step towards investors' interests. 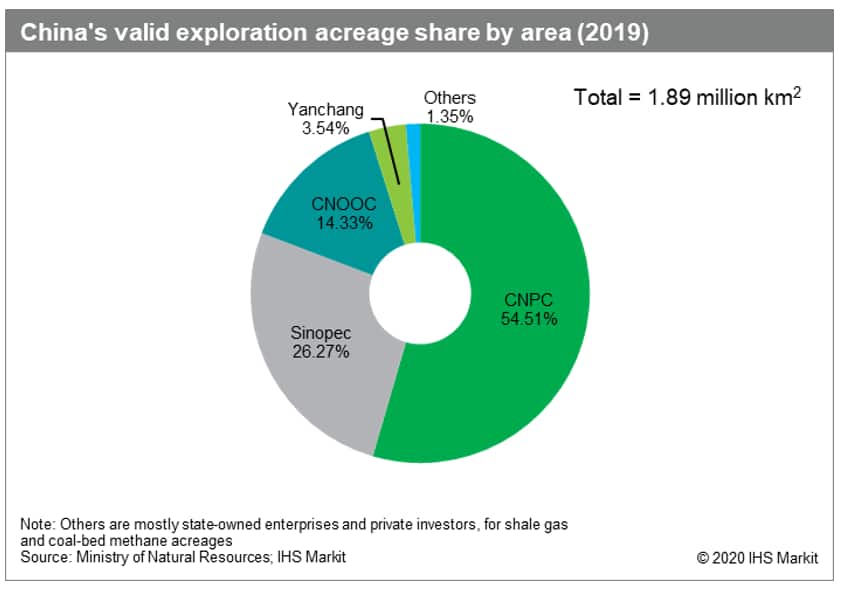 The mandatory relinquishes of 25% licensed acreage for each extension help to force the major NOCs, who control most of China's oil and gas exploration acreages, to cede their acreages to the hands of newcomers, and maximize the potential of the limited prospects.

Read the full analysis of China's opening the upstream sector to foreign investors.

Book a consultation with Kunfeng Zhu

IHS Markit experts are available for consultation on the industries and subjects they specialize in. Meetings are virtual and can be tailored to focus on your areas of inquiry.
Book Now
Subscribe to RSS Feed