In many ways, 2018 was the year of grid-sited energy storage in China. One after another, grid companies announced massive battery energy storage procurements to install in their transmission and distribution grids—many of these surpassing the 100 MW-scale. The sudden onset of additions has spurred rapid growth in China's total installations. By the end of 2019, grid-sited projects are expected to reach a cumulative 838 MW, up from only 7 MW in 2017.

The explosion of projects marks a significant round of experimentation for the power grid to determine how enhanced grid flexibility enabled by energy storage can address a variety of regional issues. Jiangsu and Hunan will bring online 420 MW to address the lack of peaking capacity. Henan, meanwhile, has one of the highest concentrations of coal-fired power in its power mix in China. The 100 MW of energy storage in Henan's grid will help provide rapid-response grid control capabilities that coal plants lack. Gansu, a key province for renewable energy in China, will also install 180 MW of storage to manage the rising share of wind and solar power in the grid. 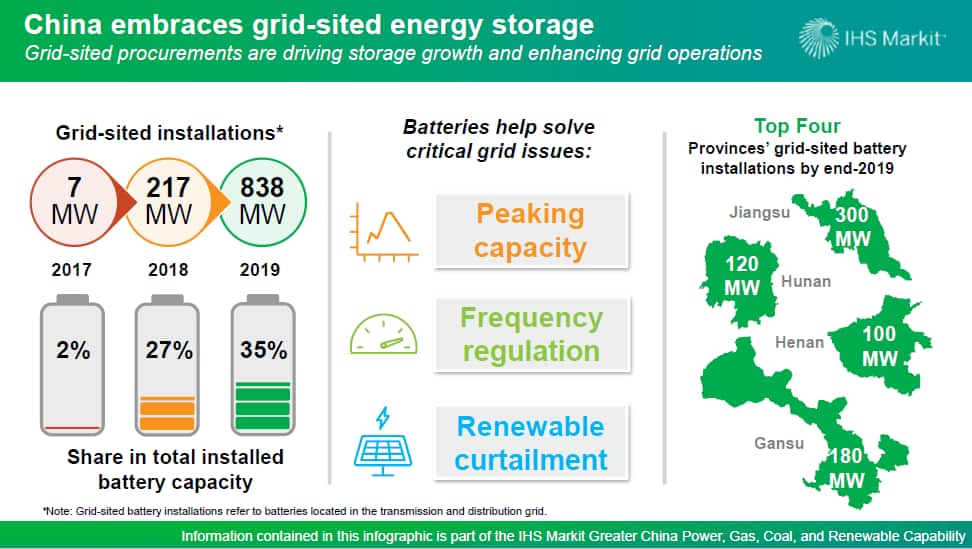 For domestic battery suppliers and project integrators, these grid procurements bring along new business opportunities, but its unclear if this rapid growth will continue. Safety concerns are mounting as reports surface on overheating batteries and fires. China's ongoing power reforms also add an element of uncertainty; the centralized nature of these procurements runs counter to the proposed markets that will open up grid stabilizing services to private players instead of the grid itself. Technology development, power market reform, and how the market responds will determine the answers to the key questions on how energy storage will evolve in China, including opportunities for different players and the applicability of energy storage colocated with generation, grid-sited, or behind the meter.

Learn more about our coverage of the Greater China energy market through our Greater China power, gas, coal, and renewables service.

Megan Jenkins is a research analyst with the Greater China Power, Gas, Coal, and Renewables service.