The pace of global economic growth slowed in April to the lowest since the downturn of the second quarter of 2020, according to the latest PMI data compiled for JPMorgan by S&P Global. The survey data reflect information provided by panels of over 30,000 companies in 45 countries.

Global growth was dragged lower by steep contractions in Russia and mainland China, related respectively to the invasion of Ukraine and COVID-19 lockdowns. Growth elsewhere was encouragingly resilient, losing only marginal momentum in April on average, linked to loosened COVID-19 restrictions. The US, Eurozone, UK, India and Brazil in particular all continued to report strong growth.

However, the war and new lockdowns in China have worsened existing supply chain and inflation trends, leading to record selling price inflation for goods and services globally in April. Growth was also uneven, with a renewed manufacturing decline leaving growth reliant on services.

The outlook is mixed, with some near-term support likely from a further strong rise in global backlogs of orders in April, but business confidence about the outlook has been knocked further by the events of the month, hinting at lower demand growth fundamentals. 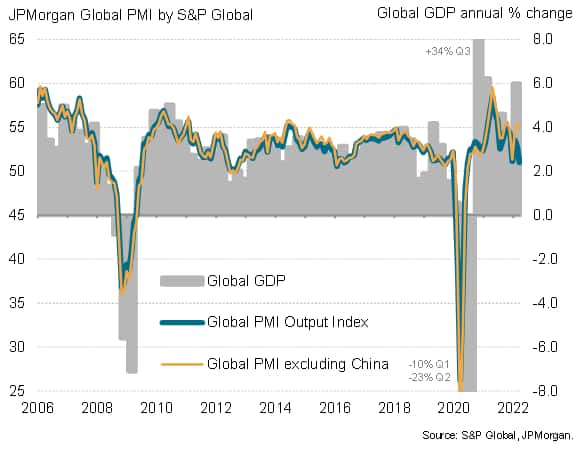 The JPMorgan Manufacturing Purchasing Managers' Index™ (PMI™), compiled by S&P Global, fell from 52.7 in March to 51.0 in April. The drop in the index signalled the weakest pace of economic growth since the start of the recovery from the initial pandemic lockdowns in early 2020.

While an easing of COVID-19 containment measures on average globally helped to sustain service sector growth in April, the rate of expansion in the service sector fell to the second weakest seen over the past 15 months. Adding to the deteriorating picture was a renewed decline in manufacturing output, which fell in April for the first time since June 2020. 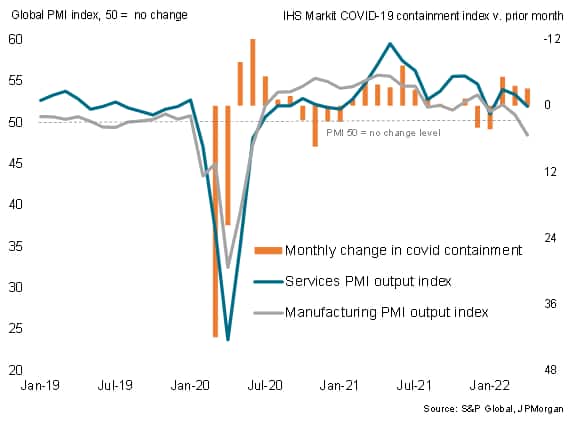 The two key drivers of the slowdown during April were the ongoing Russian invasion of Ukraine and the continued lockdowns in mainland China, as the authorities persisted in their efforts to contain COVID-19 outbreaks.

Russian economic activity collapsed for a second successive month as war sanctions curbed business activity. Although the month-on-month decline was somewhat less steep than had been signalled in March, it was still the second largest drop in Russian output recorded since the global financial crisis with the exception of the initial COVID-19 outbreak. Both manufacturing output and services activity fell sharply again in Russia during April.

China likewise saw a second month of slumping output in both manufacturing and services, though in China's case the rates of decline accelerated to highs exceeded only by the collapse in output seen in February 2020.

China's slowdown has been the result of COVID-19 containment measures having been tightened in April to the most stringent seen so far in the pandemic. In contrast, a loosening of restrictions helped boost output in India and Brazil, the former enjoying the best expansion for five months and the latter more notably recording the strongest growth surge since late-2007. 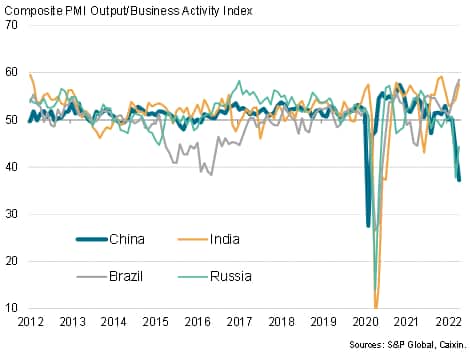 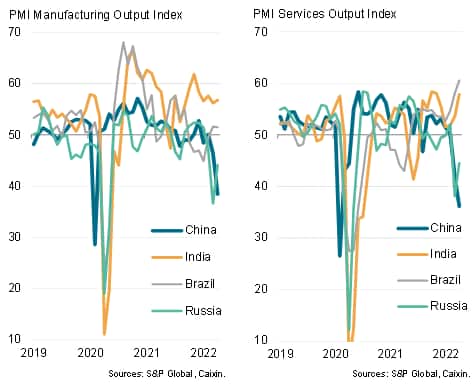 Looser virus restrictions also helped to boost develop world expansions. Strong gains were reported in the US, eurozone and UK as service sectors in particular benefitted from pandemic-low containment measures. In the case of the eurozone, growth accelerated on the back of a further loosening of restrictions in April, whereas the UK and US - which had opened up earlier from their Omicron waves - reported some moderation of the rebound in activity. Japan meanwhile saw March's tentative return to growth gather a little more momentum to register the fastest - albeit still modest - growth since December. 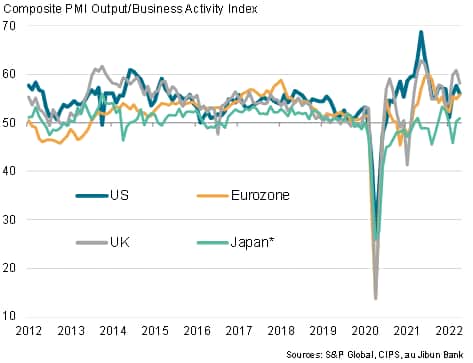 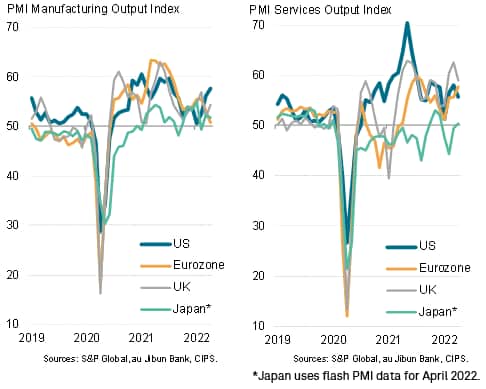 Developed markets were by no means immune to the effects of the war in Ukraine and China's lockdowns, however, with a resulting lengthening of supply chains hampering manufacturing growth most notably in the eurozone, where production growth almost stalled, and in Japan, where output growth remained only modest (according to the flash PMI). In contrast, a strengthening manufacturing sector was evident in the US and, to a lesser extent, the UK.

A further effect of the Ukraine war and China's virus outbreaks was evident in a surge in inflationary pressures, notably via higher gas and oil prices but also through a broader intensification of supply chain delays and accompanying price hikes, which - alongside a further reported rise in wage pressures in many markets - led to increased prices for a wide variety of goods and services.

April consequently saw average input costs across manufacturing and services rise globally at a rate not witnessed since mid-2008, while average selling prices for goods and services increased at a rate far in excess of anything recorded since comparable data on output prices were first available in 2009. 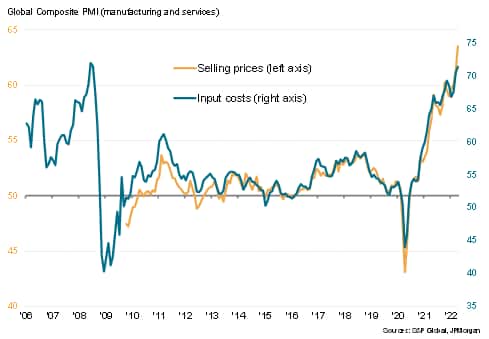 New record selling price inflation rates were seen in the US, eurozone, UK, and Brazil, with a near-record (though far more subdued) rate reported in Japan. India meanwhile reported the strongest rise since 2013. In China, in contrast, slumping demand due to lockdowns pushed average prices lower for the first time since May 2020 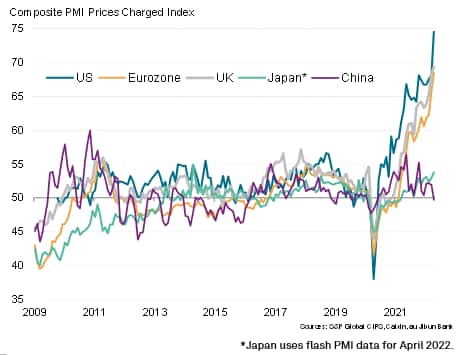 Of particular note during the month was the extent to which service sector selling price inflation, which has generally lagged that of goods during the pandemic, and especially in 2021, has now almost matched that of goods. This reflected that the recent surge in demand for services is outpacing supply - as indicated by a near record increase in backlogs of work in the service sector. 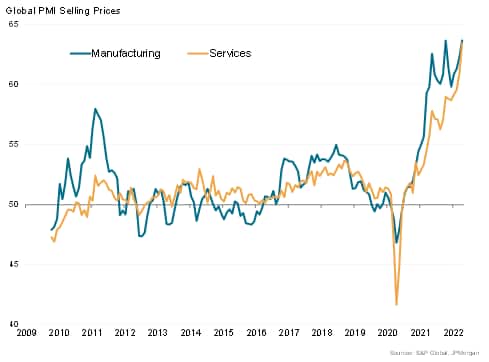 With the April surveys recording the second-strongest global rise in companies' backlogs of work since May 2004, this build-up of back orders should provide some support to business activity in the coming months, assuming some alleviation of existing constraints on activity is possible. 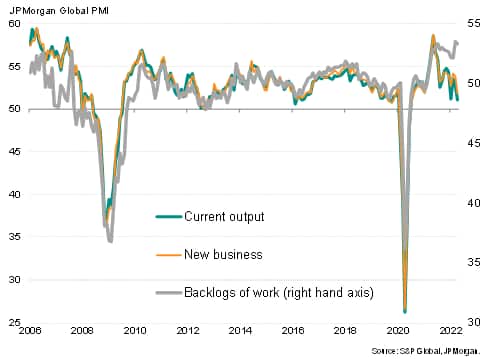 This support to growth is by no means even, however. While backlogs rose especially strongly in the US and eurozone, only a modest rise was seen in the UK, China and India, and backlogs fell slightly in Japan and Brazil.

Similarly, data available so far point to a potential loosening of global COVID-19 containment measures in May, which should provide an additional support to near-term growth, especially for travel related activities and hospitality. Any relaxation of containment measures could also help loosen some supply constraints, especially if restrictions can be loosened in mainland China. That said, the path of the pandemic clearly remains uncertain. 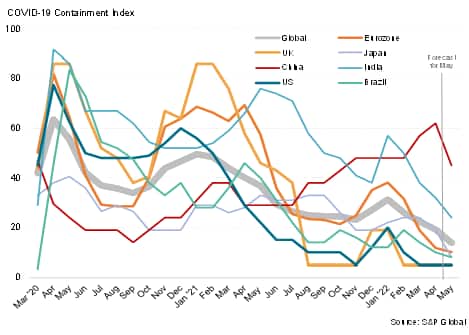 While rising backlogs of order may provide a near-term support to growth, this boost may prove temporary, as the April PMI surveys saw global business expectations about growth in the next 12 months slip further, dropping for a second successive month to the lowest since September 2020, deteriorating in both manufacturing and services.

Coming at a time of stretched supply chains and soaring prices due to the pandemic, Russia's invasion of Ukraine has hit business confidence across much of the world. Companies report concerns over the further exacerbation of inflation pressures and accompany policy tightening by central banks as having led to darker economic growth prospects, hinting at the potential for increased risk aversion. 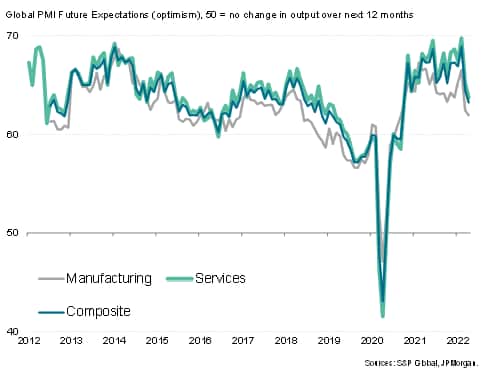 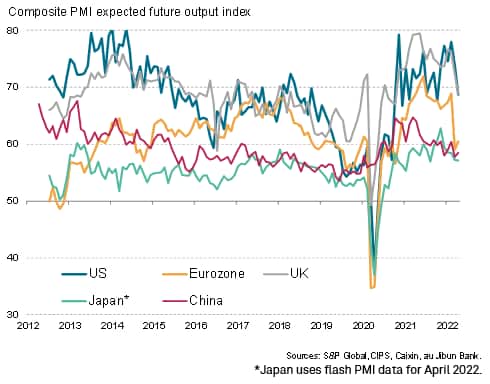 The survey data therefore point to global economic growth being hit hard by the twin effects of the war in Ukraine and China's latest lockdowns, albeit with the impact outside of these two economies so far being relatively muted as service sector growth in particular is buoyed by the reopening of economies from COVID-19 restrictions.

The supply chain and labour supply constraints emanating from the pandemic have meanwhile been exacerbated by the war and China's lockdowns, feeding through to yet further upward pressure on inflation.

While some easing of these constraints indicates some support to near-term economic growth as pent-up demand and backlogs of orders feed through to increased activity, companies are reporting reduced prospects for the year ahead, which hints at further downside growth risks in the coming months.

PMI updates to track the course of supply and demand over the coming months are available to all. Sign up to receive updated commentary in your inbox here.